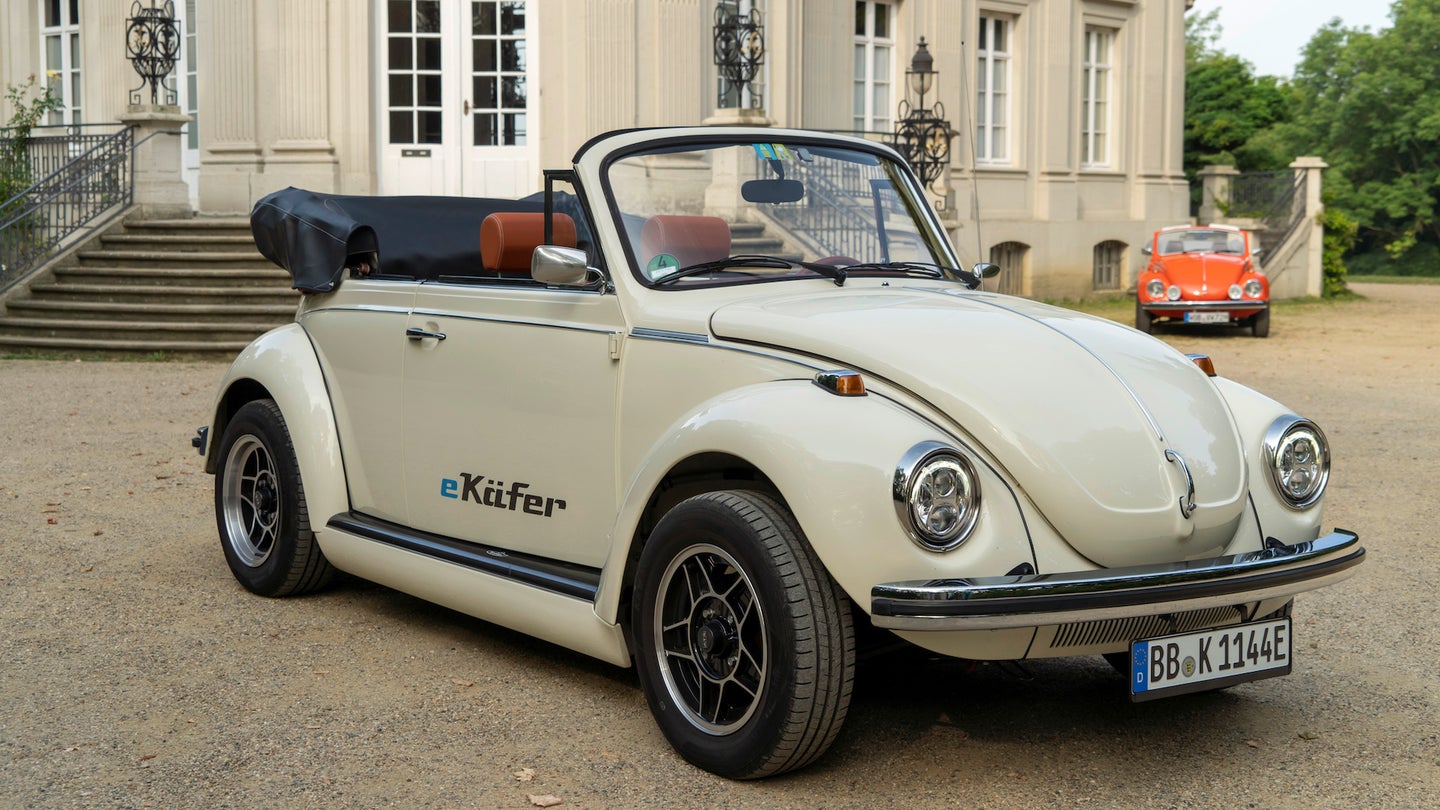 If you live in one of the many places where regulators threaten or plan to outright ban combustion-powered cars, but don't feel like giving up your heirloom Volkswagen, you're not yet up a creek without a paddle. Volkswagen has just announced that it will offer to future-proof classic Type 1 Beetles with its latest electric drivetrain technologies.

Two such conversions have already been built by Volkswagen with its partner eClassics, which named the cars "E-Käfer," käfer translating from German as beetle. Both cars are described as "near-production" prototypes .   or proof-of-concept vehicles that show how customer-commissioned E-Beetles could look if ordered en masse. As Volkswagen plans to neither revive the Beetle under its electric vehicle brand, ID, nor put the ID Buggy into production, the eClassics-built E-Käfer is effectively your only shot at owning a Volkswagen-approved electric Beetle.

To build these two cars, Volkswagen supplied eClassics with powertrain components derived from its new E-Up! city car. Beneath the floor sits a 36.8-kilowatt-hour (kwh) battery, which spikes the Beetle's curb weight to 1,280 kilograms (2,822 pounds), or about 50 percent more than what the barest original Beetle weighed. Fortunately, a more powerful, 81-horsepower electric motor compensates for this, but by no means will the E-Käfer blow your socks off the way the ID.R will; it still takes almost four seconds to hit 30 miles per hour from a stop, and takes more than eight to exceed 50. Keep the accelerator matted long enough and the electric Beetle will top out at 93 mph, but leaving your foot on the floor will make the car's estimated maximum range of 200 kilometers (124 miles) hard to achieve.

Volkswagen says it'll display one of these two vehicles at the Frankfurt Motor Show, which kicks off next Thursday. Thomas Schmall, a board member for Volkswagen Group Components, hints that Volkswagen and eClassics could make a business of Beetle conversions, the clear subtext being if there's money in it.

"The electrified Beetle combines the charm of our classic car with the mobility of the future," Schmall explained. "Innovative e-components from Volkswagen Group Components are under the bonnet—we work with them to electrify historically important vehicles, in what is an emotional process. We are also providing Beetle owners with a professional conversion solution, using production parts of the highest quality."

Schmall also announced that a similar conversion could be in the cards for the Type 2, or even the Porsche 356. Further down the road, Schmall says, Volkswagen could even adapt parts from its purpose-built electric MEB platform to use in electric conversions. Use of the highly modular MEB system could permit much greater power levels and battery capacities, or even the introduction of all-wheel-drive on models that didn't previously have it, but again, this sounds contingent on whether the Beetle conversion program is a success. For the sake of electric hot-rodding, let's hope it is.