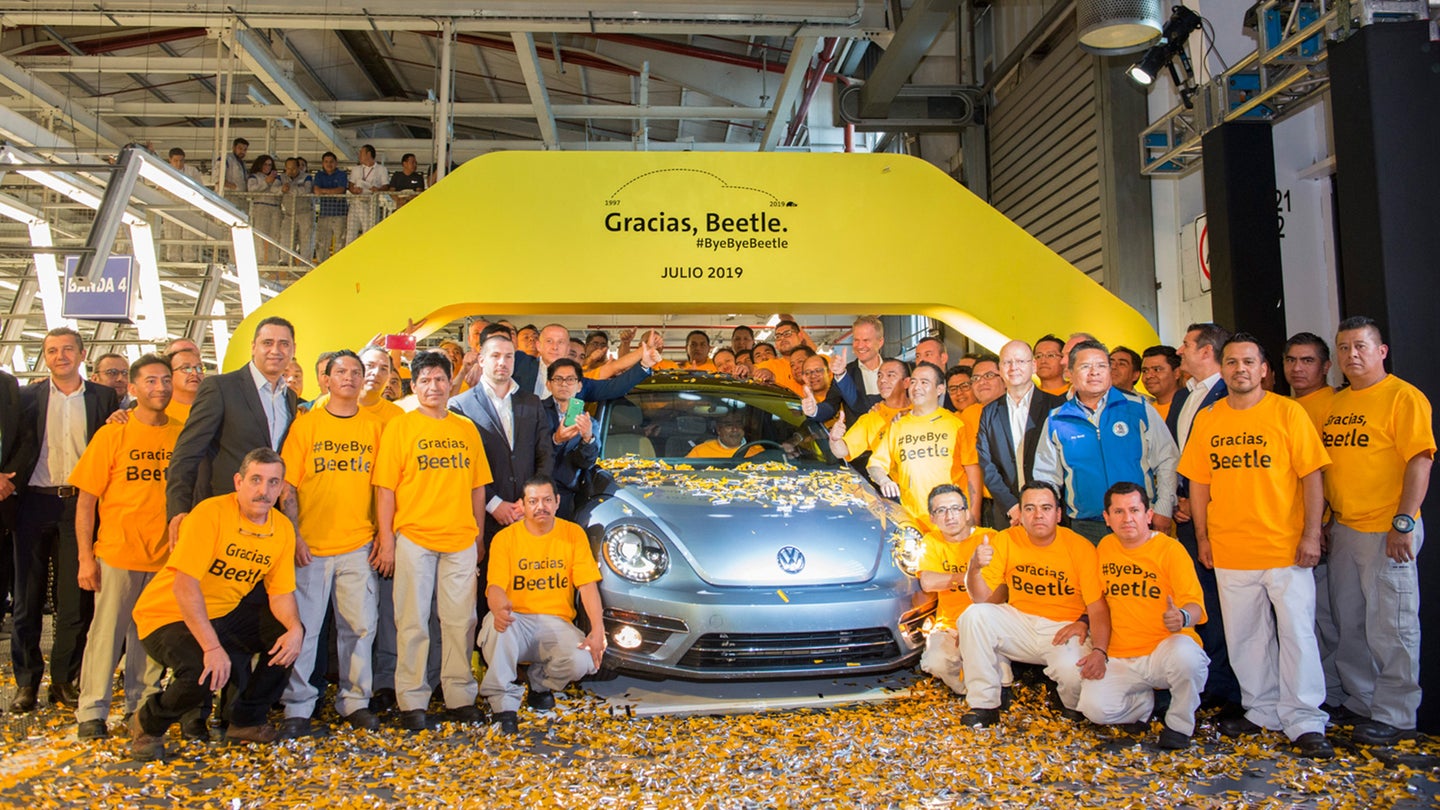 We'll forgive you for thinking the Volkswagen Beetle is the poster child for Teutonic longevity. Though Germany is forever linked with the Beetle, for the past 20 years, that European persona took a back seat as production continued in Mexico. So it's fitting that we found ourselves standing in the land of Día de Los Muertos to celebrate the ending—yes, the final ending—of one of the most iconic automobiles ever produced.

On July 10, hundreds of people, from journalists to VW employees to concerned superfans, wandered into Volkswagen’s Puebla plant to watch the final VW Beetle roll off the line. A playlist of carefully selected bittersweet pop echoed over the factory's loudspeakers. Though it seem strange to us that a car so closely identified with midcentury Germany and American counterculture would have its biggest devotees in developing countries, this was the car that put much of Latin America on wheels.

Just as the Model T got America moving, the Type 1 Volkswagen Beetle—the original model designed in Germany by Bela Barenyi and Ferdinand Porsche—was the car of Central and South America. German factories stopped building Beetles in 1978, but the car soldiered on in the Brazilian market until 1986, and the Mexican variety carried on another 17 years before the car finally ceased production in 2003. That's quite a run.

Over 1.7 million original Beetles were built in Mexico before 2003, and many of those cars stayed home. Bottom-peso pricing meant that the Type 1 Beetle was actually the country's most popular new car until 1996. Some estimates hold that as many as 80 percent of Mexican families owned one, meaning millions of people in Mexico and the rest of Latin America alive today took their first rides and eventually learned to drive in a Beetle whose origins date back over half a century.

And when the time came for Volkswagen to raise the front-engined, Golf-based New Beetle, it decided Puebla would be just the place to build it. The workforce was understandably excited, paying tribute to the first 100-percent Mexican-built car with bouquets of flowers, a mariachi band that followed it down the production line, tequila, and weepy eyes. Lots of weepy eyes. Nave 28, the building in which the car was built, is still informally known among Puebla's workers as "Tears Hall."

The New Beetle did the Type 1 proud and sold nearly 1.2 million units across its lifespan. It exited the stage as the A5 Beetle—sharing parts with its Puebla-built stablemates of the Golf and Jetta—continued the Bug’s march on for another half million sales. In all, Puebla-built Beetles number somewhere around 3.3 million, with only Volkswagen knowing the exact total. Whatever the number, it reached a final tally in early July when Volkswagen employees welded, pressed, and bolted together the final Beetle.

After the car exited the production line and made its way to the honorary dais in front of the crowd, hundreds of assembly workers swarmed, eager to be included in the historic photos being taken. With an explosion of confetti, the pop music halted out of respect for the ceremony's centerpiece: A mariachi band. Just as it was ushered in, so will it be ushered out.

That's not to say this is a purely somber occasion. After the Beetle's production line is retooled, Volkswagen will commence production of an Americas-oriented subcompact crossover codenamed "Tarek" in the Beetle's place sometime next year, with a market launch planned for early 2021. That means nobody assembling Beetles as of July 10 was out of a job on July 11. Though the Tarek will ensure that Puebla remains an integral part of Volkswagen’s operations, its arrival still means the 81-year-old Beetle nameplate is no more. We wouldn't be surprised to see it come back under VW's new electric I.D. sub-brand, though.

Regardless of the future, it's Mexico alone that's built the Beetle for the past 20 years, and it's Mexico that's earned the right to call the Volkswagen Beetle its own. The Beetle deserves its mariachi goodbye. Vaya con Dios, amigo.