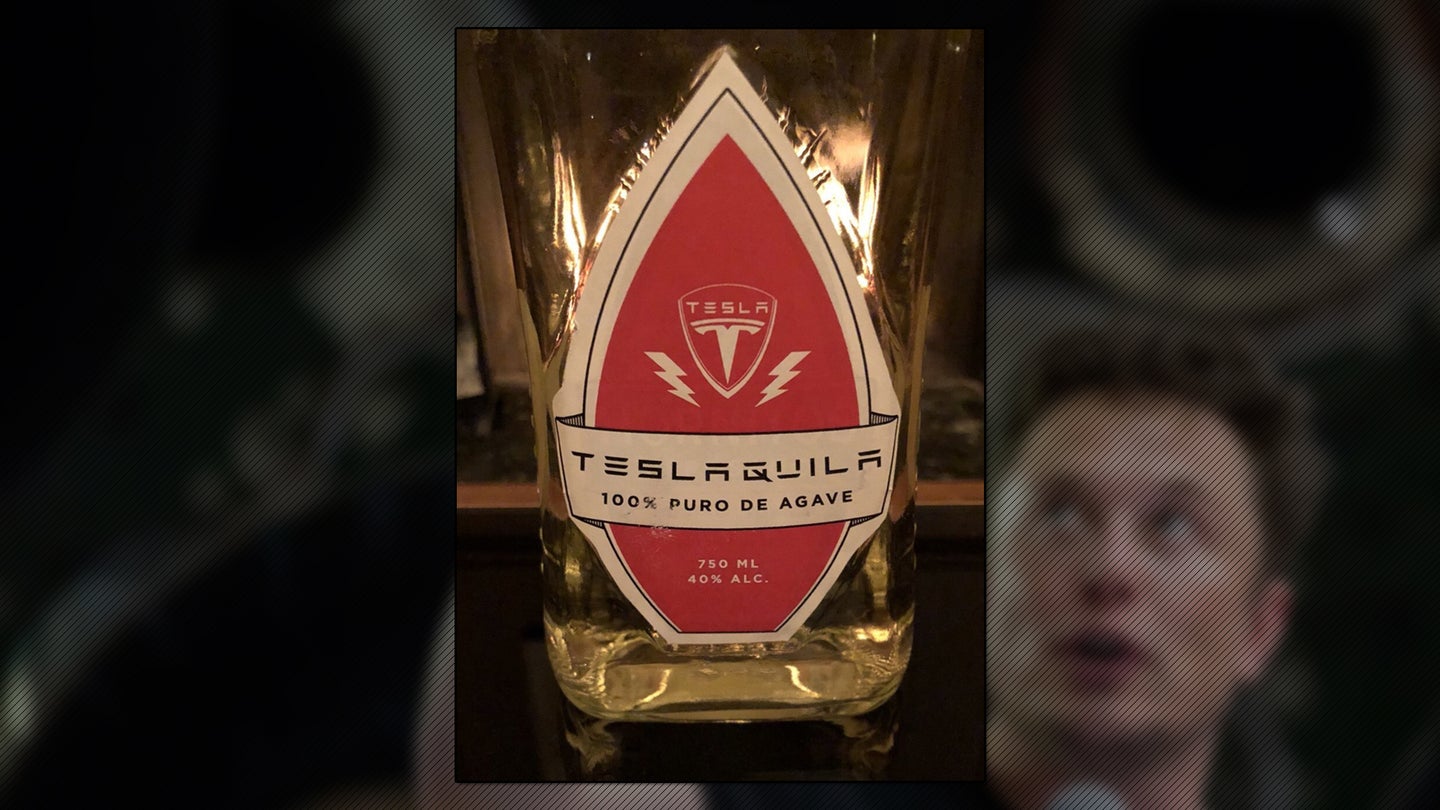 Tesla CEO Elon Musk is rather excited to bring the idea of a Tesla-branded tequila to life. The aptly named "Teslaquila," concept received enough positive feedback from the Tesla community that Musk actually sought production of the popular Mexican liquor. There's just one problem; according to Reuters, Mexico's tequila industry is afraid that Musk is going to soil the reputation of the traditional beverage.

According to Mexico’s Tequila Regulatory Council (called the "CRT"), the “name ‘Teslaquila’ evokes the word Tequila ... (and) Tequila is a protected word." Meaning that Musk would need to adhere to a strict set of guidelines in the tequila manufacturing process in order to brand it as such. One of the most important regulatory requirements to the CRT is the origin of production. In order to be branded as "tequila," the liquor must be produced in one of five Mexican states: Guanajuato, Jalisco, Michoacan, Nayarit, or Tamaulipas.

Musk Tweeted a conceptual label for a bottle of Teslaquila that displays both the Tesla nameplate and a description that reads “100 percent Puro de Agave.” Around the same time, Tesla filed patents in the United States, European Union, Jamaica, and Mexico for Teslaquila, calling the drink both “distilled agave liquor” and “distilled blue agave liquor.”

The CRT keeps a watchful eye on the production of tequila. If Musk plans to bring Tesla into the liquor game, it will need to work diligently to comply with the board's regulatory requirements, else face a potential legal battle. The CRT insinuates that misguided consumers may believe they are drinking tequila, when in actuality the drink may not fit the board's definition of the alcohol.

“If [Tesla] wants to make Teslaquila viable as a tequila it would have to associate itself with an authorized tequila producer, comply with certain standards and request authorization from Mexico’s Industrial Property Institute,” the CRT noted in a statement. “Otherwise it would be making unauthorized use of the denomination of origin for tequila."

Teslaquila became a running joke after Musk tweeted a photo of himself for April Fools in which he pretended to be passed out from over-indulgence while holding a sign which read "Bankwupt!", a mocking of Tesla stock short-sellers.

The premium celebrity-backed alcohol industry is surprisingly booming. AC/DC, Adam Levine, Carlos Santana, Justin Timberlake, and P Diddy have all launched or lent their names to brands of tequila in the past several years. Even George Clooney got in on the game, selling his tequila brand Casamigos for $1 billion in 2017. Automakers getting into the alcohol industry is a tad rarer, however, Porsche dipped its toes into winemaking earlier this year when it crafted a 356-themed wine.

Musk and his cross-company teams are known for their creative methods of fundraising by selling luxury lifestyle products for a premium. Similar campaigns have included surfboards, not-a-flamethrowers, and even a Tesla-branded power bank for charging your cell phone.

Tesla has not responded to The Drive's request for comment at the time of writing.