British Police Ticket Passing Lane Hog with No Traffic Behind Them

The lost art of lane discipline still lives on the M20. 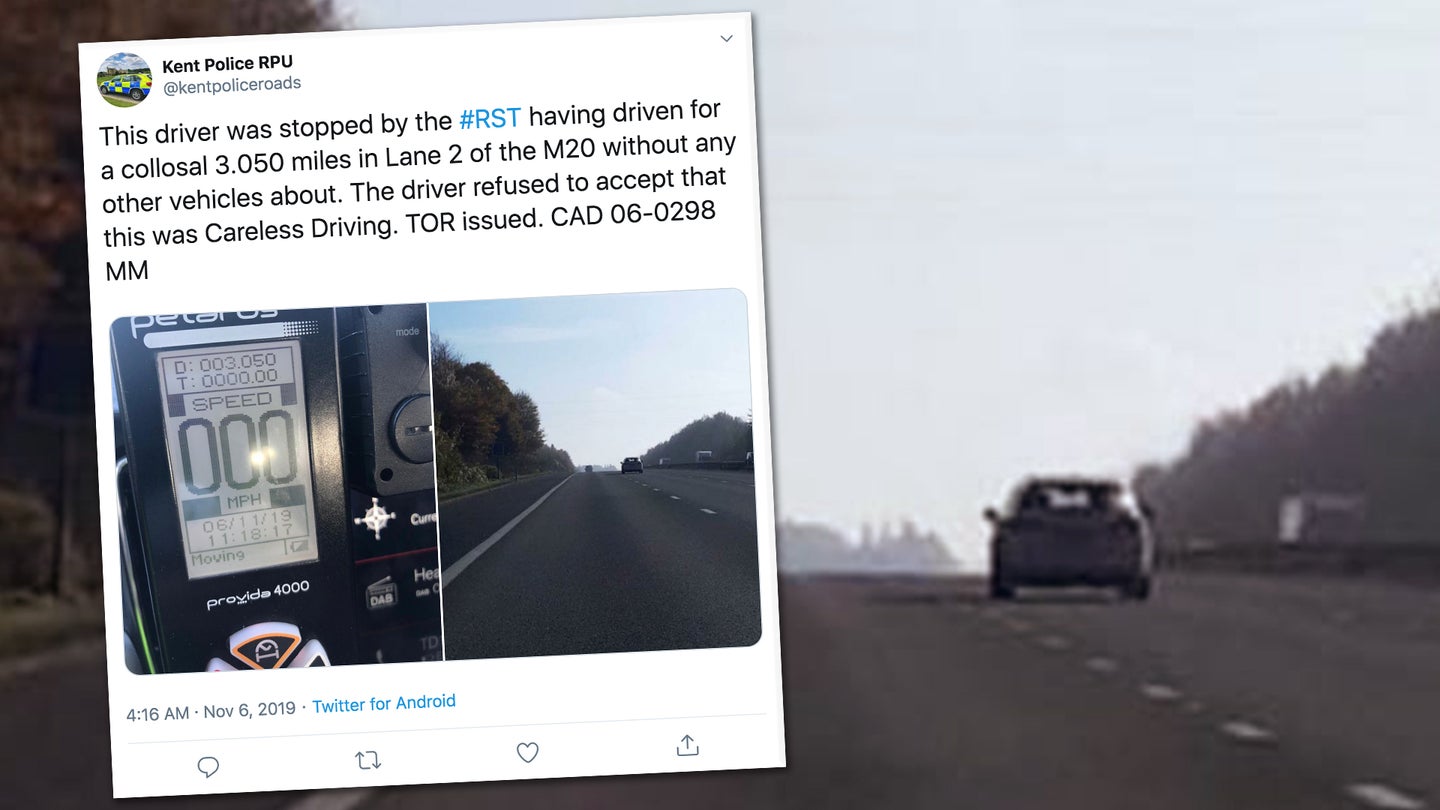 Okay kids, time for a quick refresher on how to use a highway. There's a lane for driving, and a lane for passing. It's not really a fast lane, and it's definitely not a cruising lane. The passing lane is like a public bathroom—get in, do your deed, and get out before people start to wonder what you're up to. Stay in there too long and the police might come knocking, or worse, make an example of out of you on Twitter.

Twice last week, Britain's Kent Police Roads Policing Unit has done exactly that with two passing lane hogs. A quick note to help non-Anglophiles decipher the following tweets: On British motorways, lanes are numbered from the outside in. Because they drive on the left side of the road, faster drivers are supposed to pass on the right. However, if there are more than three lanes traveling one direction, the rightmost inner lane is reserved for semi-trucks and other large vehicles, meaning Lane 2—the middle—becomes the passing zone.

First up, we've got a driver spent a "colossal" three miles in the passing lane on the M20 last Wednesday before police pulled them over. Traffic was extremely light, so the offender was neither passing anyone nor holding up faster cars, but that still warranted a $128 ticket and three license points for careless driving, according to The Sun. Police say the offender "refused to accept" that their victimless lane-hogging constituted careless driving.

Just three days later, Kent Police again took to Twitter to highlight "one of the worst cases of Lane Hogging seen by the RST [Road Safety Team]." This individual allegedly drove 11 miles in the passing lane in what appears to be a third-generation Hyundai Elantra, "completely oblivious of traffic around them" as they turned into a rolling roadblock. Likewise, the driver earned a $128 ticket and a few points.

In America, where the left lane is both a passing and de-facto fast lane in more congested areas, an increasing number of states have enacted similar laws that specifically allow police to ticket left lane slowpokes and those driving in it without the need to pass another car. Fines range anywhere from $50 in Tennessee to $500 in New Jersey.

Speeders in Estonia Were Given Time-Outs Instead of Fines

What’s worth more; your time, or your money?