With only three others painted in this sparkling hue, this “Batmobile” adds a welcome splash of color to the comparatively tame collector scene. 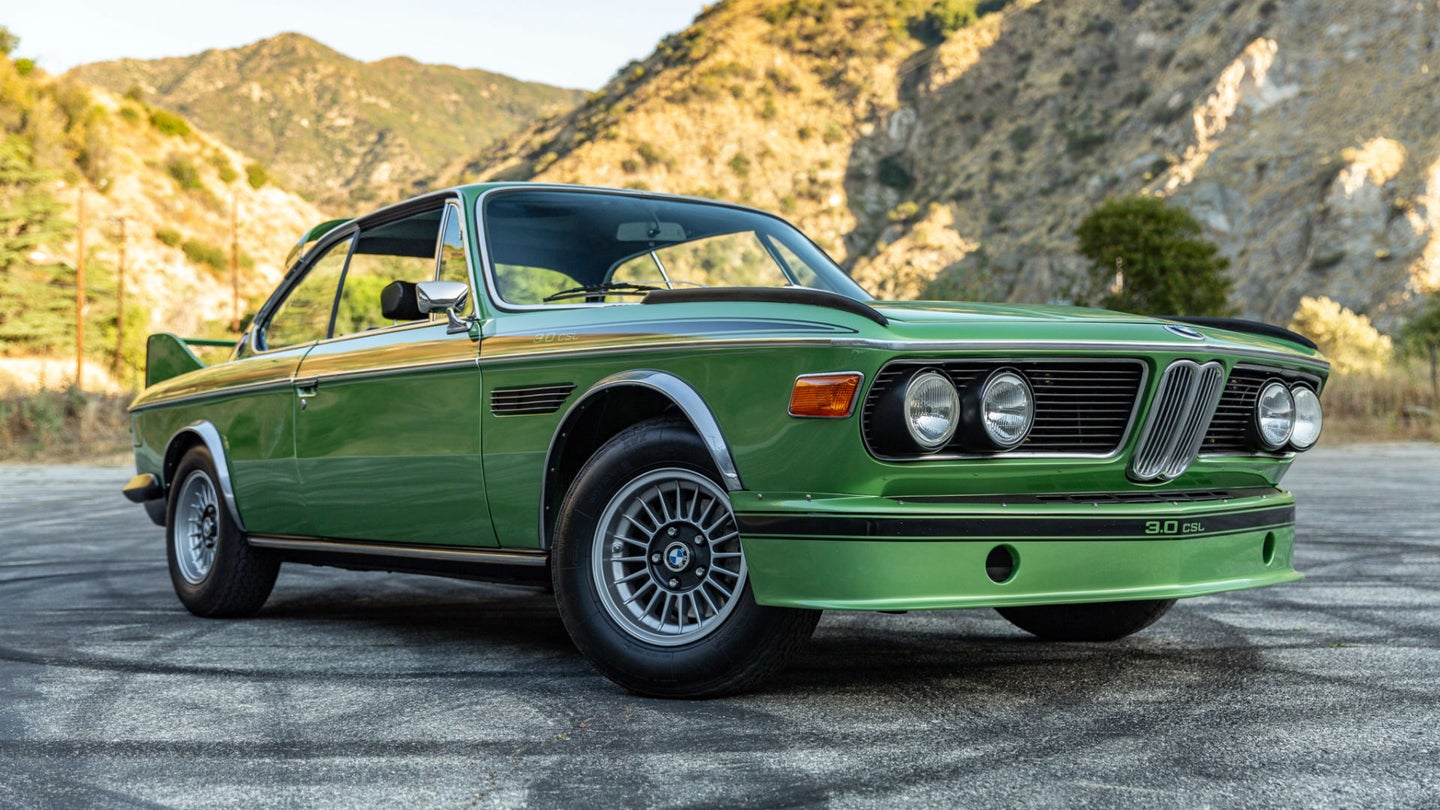 What makes a car quintessentially "Batmobile-esque?" Some say it's a dark gray Lamborghini Murcielago immortalized as Bruce Wayne's "stealthy" form of transport in The Dark Knight, or a long, black, front-engined ride from the Burton era. Others swear that nothing comes close to the black and red 1966 Ford Thunderbird from the original TV series. But what about a bright green 1970s BMW homologation special?

That's exactly what this 1974 BMW 3.0 CSL "Batmobile" is that's currently up for bidding on Bring a Trailer, and it's an icon in its own way.

BMW created the 3.0 CSL out of a need to qualify the popular 3.0 CS for the European Touring Car Championship, producing 1,265 lightweight variants of the CS (the "L" in CSL standing for "leicht" or "light"). The car featured a massive 440-pound weight reduction courtesy of a new unibody built from thinner metal, a mixture of steel and aluminum body panels, and plexiglass side windows. Its most iconic feature, however, was the new aerodynamic package comprised of a large front air dam, front fender fins, and a huge rear wing with a supplementary roof spoiler. This enhanced aero is what earned the 3.0 CSL its "Batmobile" nickname and a spot on nearly every child's wall.

This example is one of 57 Series 2 CSLs produced, and one of just four finished in Taiga Metallic green. The Series 2 introduced fuel injection and a marginally larger 3.03-liter engine than its predecessor, but this car is powered by a rebuilt 3.2-liter inline-six that pairs nicely with the original Getrag four-speed manual transmission. It also comes with 14-inch Alpina wheels and black Scheel sports seats. (Check out those checkered green carpets!)

It was restored in 2015, which consisted of a bare-metal repaint in its factory color and repairing the usual '70s-era rust. Since then, the car has competed in numerous classic car shows, taking home first place at the 2015 Legends of the Autobahn during Monterey Car Week and third in its class at the 2019 San Marino Motor Classic.

With a top bid of $120,000 at the time of writing, this Batmobile is looking for another affluent playboy-turned-vigilante to scoop it up.

This Coca-Cola-clad sports prototype was driven by the likes of Hurley Haywood and Vern Schuppan.

The odometer reads just 287 miles ticked off since it was bought new in 1986.