If you had a thing for Punky Brewster and don’t mind gawkers as you drive by, this Polo Harlekin has your name written all over it. 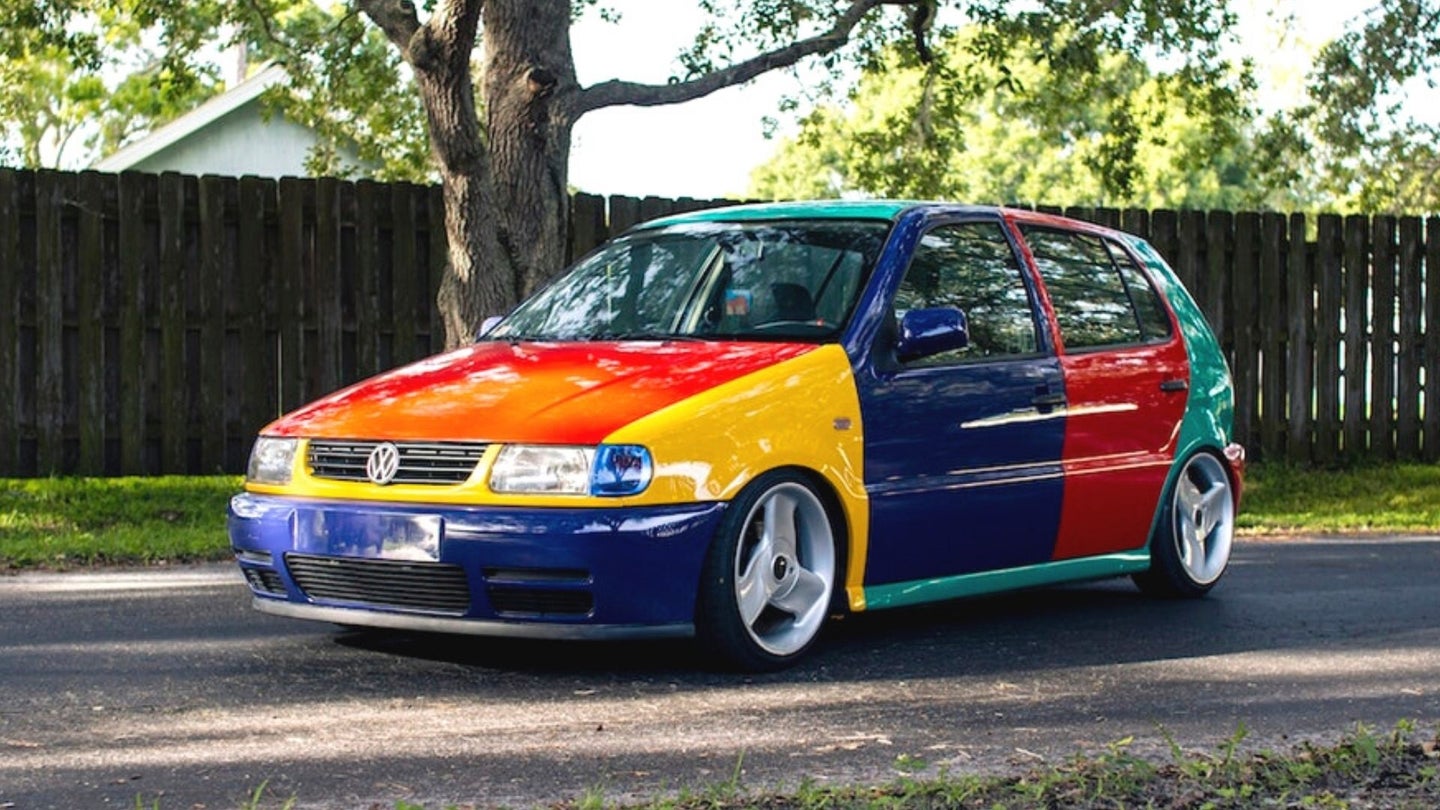 In 1995, the special edition Volkswagen Polo Harlekin (the German spelling for Harlequin) made its debut at the Frankfurt Motor Show. Inspired by an ad for a multicolored 1964 Beetle, VW planned a small production run. The market went wild for the patchwork quilt color scheme, and the German automaker ended up building more than 3,000 of these funky hatchbacks.

According to Volkswagen U.S., an original Harlequin Golf with manual transmission would have been priced around $13,000. With three days to go in the auction, a 1996 Euro version is hovering around $10,000 on Rad for Sale, Radwood’s site for '80s and '90s-era cars and accessories. Said to be one of only three or four in North America, you won’t see many of these on the road. The automaker teased us with a return of the Harlequin paint scheme earlier this year; sadly, it was a one-off.

The interesting thing about this car is that it was fairly labor-intensive. Each Polo was painted with one base color: Pistachio Green, Ginsberg Yellow, Chagall Blue, or Flash Red (which was a bright crimson and called Tornado in the U.S. market). Then it was pulled from the production line and disassembled by hand, then reassembled with swapped-out body panels from other colors in a predictable, meticulous pattern. An additional layer of intrigue: the blue and green shades were not available as a paint color for this car in Mk3 Golf form in North America.

This particular Radwood version has a Pistachio Green body shell, as evidenced by the green roof, C-pillars, and rockers. The hood, rear doors, and rear bumper are Flash Red; front bumper, front doors, and tailgate are painted in Chagall Blue; and the front fenders and radiator grille frame swathed in Ginsberg Yellow.

Other combinations were as such:

This 1996 Harlekin still has its exclusive “Joker” interior, which features all four of the body colors on speckled-gray upholstery.

First sold in Europe and residing in Belgium before it came to Florida, this Mk3 Polo has 179,000 kilometers (about 111,000 miles) on the clock and a clean title. The seller says there's a little rust, a few dents, and it needs a spitshine and polish, but it's otherwise ready to roll. It's a five-speed manual and the 1.0-liter four-cylinder engine is adequate to propel the Polo around town. It's not a new Golf R but it'll do.

If you have a thing for colorful cars (I'm with you!), this Polo Harlekin has your name written all over it.

The non-GLI also gets a more powerful 1.5-liter turbo engine as standard.

With the regular Golf models gone, the least expensive VW hatch you can buy stateside costs $30,540.