The Kia Stinger Looks Even Sweeter Without a Roof

A Florida dealer commissioned this car, and more might be on the way. 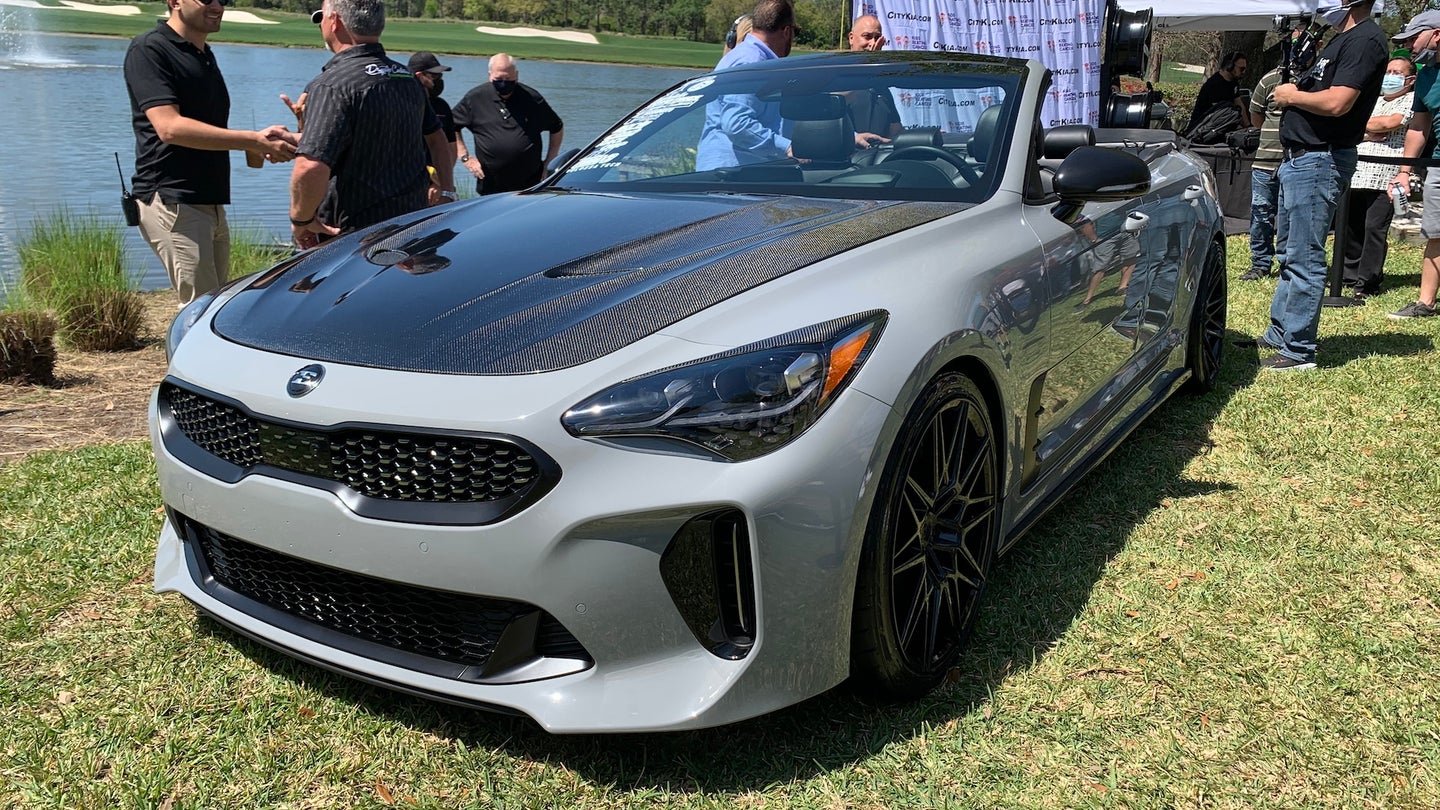 The one thing nobody has ever thought of while behind the wheel of the newly powered-up Kia Stinger GT is probably, "eh, this needs its roof hacked off." But necessity evidently isn't the only mother of invention, as a Florida Kia dealership recently commissioned a prototype of Kia's sports sedan Sawzalled up just so, and unlike many soft-top conversions, it actually looks damned good.

Christened the Stinger GT-C by Orlando-area dealer City Kia, this conceptual convertible debuted Monday at a local car show to significant fanfare and warm reception on social media. To create the car, City Kia shipped a 2020 Stinger GT2 off to Jeff Moran of Drop Top Customs, a property of Convertible Builders LLC which has been lauded for its Dodge Challenger R/T Scat Pack ragtops.

With its roof buzzed off and unibody reinforced where necessary, the Stinger then underwent modest performance augmentation to both its chassis and drivetrain. Eibach lowering springs and an anti-roll kit brought 20-inch Axe forged alloys deeper into the fenders, while a Strictly Business body kit with carbon fiber panels kept the weight down.

Beneath that composite hood lies the Stinger GT2's 3.3-liter, twin-turbo Lambda II V6, ordinarily good for 368 horsepower and 376 pound-feet of torque, though in this setup it may be capable of a few more. It now inhales through dual Velossa Tech ram air intakes with AEM filters and a Mishimoto intercooler, before exhaling again down Ultimate Performance downpipes and midpipes, and out a custom cat-back exhaust. All these serve to enhance throttle response, which is further sharpened by RaceChip software tweaks.

Contrary to a City Kia Instagram post, a project spokesperson emphasized that the Stinger GT-C remains only a concept car for now and that no production run—intact warranty or not—has been confirmed. They did, however, tell The Drive "there's real-world testing to do," suggesting that production cars are at least a possibility. And if you're keen for possibility to become probability, it'd be worth making a ruckus on City Kia's social media and giving the Stinger GT-C's official website a click.

The base four-cylinder grows by half a liter and gains 45 horsepower.

Kia’s first electric-only model showcases a new philosophy for the brand, and it looks pretty great.

Turns out, people have some strong feelings about Kia’s fairly regular little boxy car—and have been joking about it online long before today.