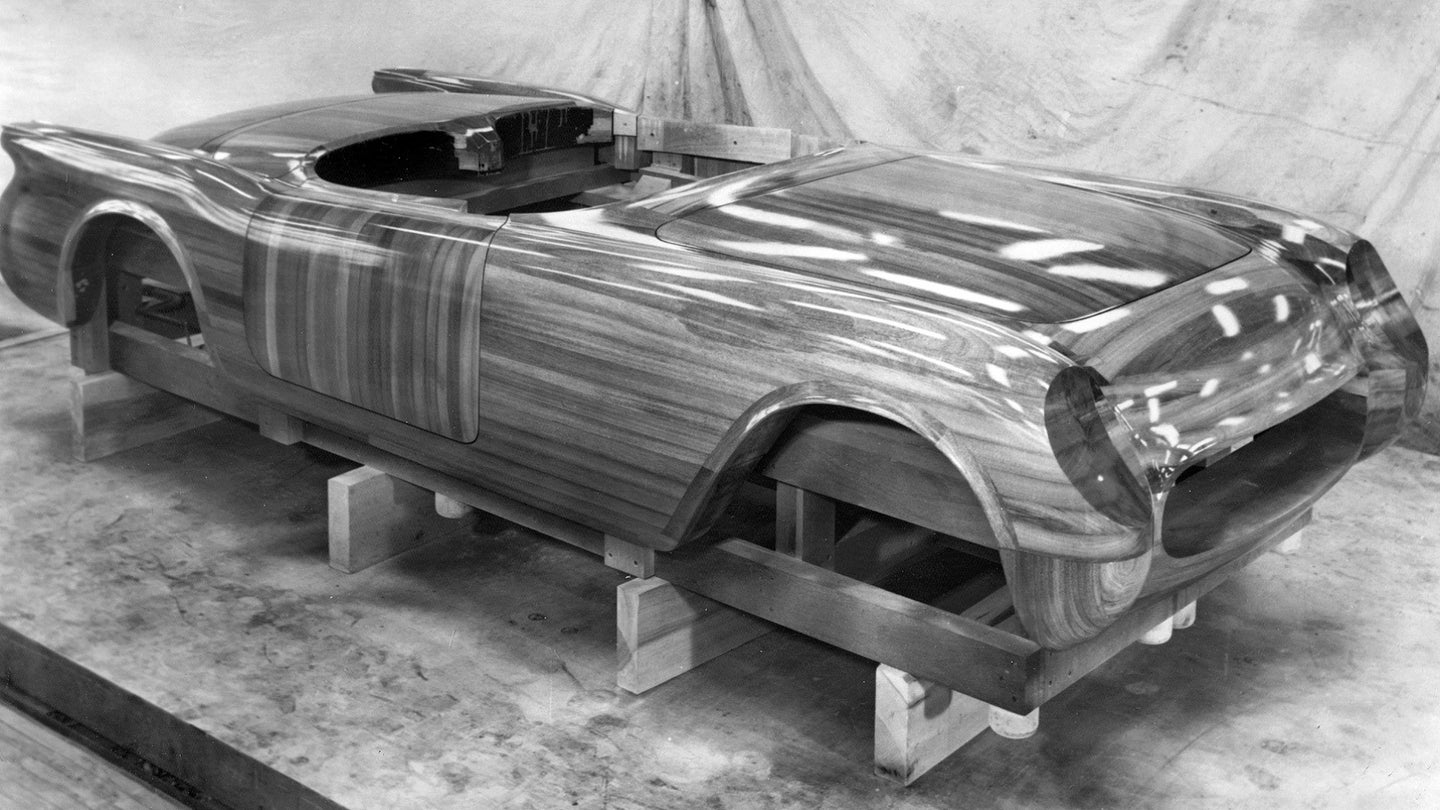 Molded Fiber Glass Companies founder Robert Morrison is largely hailed as the father of the molded fiberglass body of the Chevrolet Corvette. Based in Ashtabula, Ohio, Morrison was known as a highly competitive go-getter who convinced GM to build the new roadster in fiberglass instead of the usual steel. Fiberglass was an intense hand-built process back then, and as the ‘Vette started rolling off the line, the company used these wooden body bucks in order to create the mirror-image molds to shape the curves of the sports car.

But these weren’t your typical body bucks made from any old wood. No, the Corvette body bucks were carved from exquisite Polynesian mahogany, and the pictures show that they were also standalone works of art. The craftsmen who build these sculptures were very skilled, and the body bucks should be in a museum somewhere we can all gaze in wonder. Unfortunately, all we have left are these photos.

Chevrolet didn’t know that the sleek roadster would cause so much buzz when they brought it to the Waldorf-Astoria Hotel for Motorama in 1953. Crafted in fiberglass and equipped with a six-cylinder engine, Chevy named it Corvette after a class of small warships. Perfectly timed to appeal to both soldiers returning home from World War II and the recovering nation, the Corvette stood apart from the rest of the lineup in the Chevrolet fleet.

As the story goes, the brand made the decision to construct the Corvette in steel instead of fiberglass. Before they could begin, however, they had a change of heart, and Morrison received a middle-of-the-night call. Waking his family, the Morrisons toasted the Corvette, which became their primary source of income for many years. In fact, the Morrisons’ basement became Ground Zero for the vehicle in the beginning stages; GM engineers worked next to MFG staff on a makeshift workspace on a ping-pong table.

The wooden body bucks were used for the very first Corvette at the Motorama auto show and for some time after. They were carefully and meticulously hewn from mahogany, which is often chosen because it is less likely to warp, shrink, or swell than other woods. The fact that it’s a rich, beautiful color is a side benefit. During that period of time, sheet steel or aluminum were often hammered over body bucks to create panels for vehicles.

Sadly, every one of the mahogany body bucks destroyed when Chevrolet didn’t need them any longer. At least we have a shiny new mid-engine C8 to distract us.