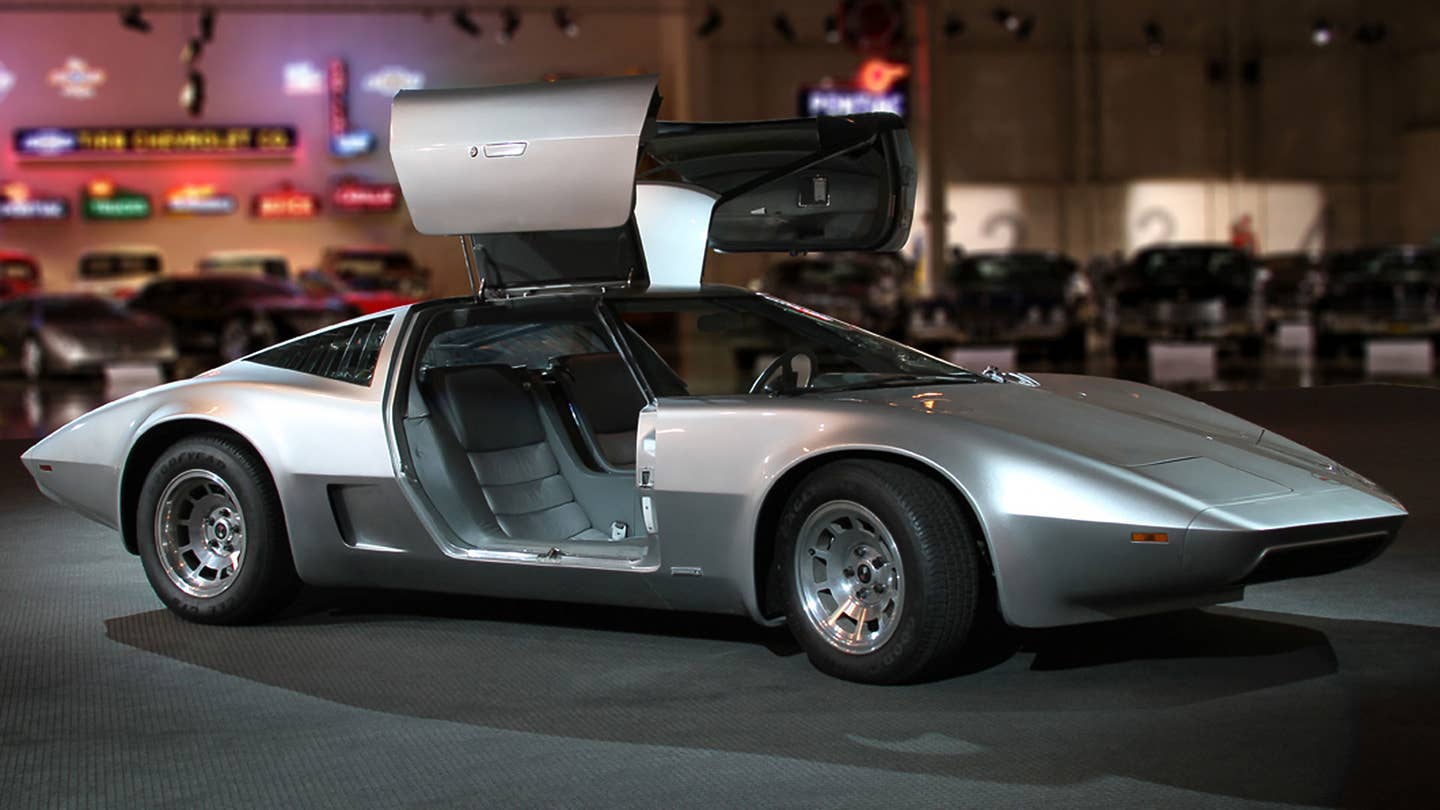 The coolest Corvettes ever made are hidden in an 81,000-square-foot warehouse in Sterling Heights, Michigan. I remember walking in and immediately thinking of Willy Wonka’s Chocolate Factory. Deep inside the GM Heritage Center there is a world of pure automotive imagination, dreamed up by Wonkas of the car world. And it’s not open to the public. How did I get in? I know the right people.*

The hidden collection dazzles. Everywhere the eye turns, it focuses on spectacular vehicles, like the Firebird 1, II, and III concepts from the 1950s, cars inspired by the new era of jet fighters and nuke missiles. Here is the first production V8 ever, inside a 1915 Cadillac. Here is the first hydrogen fuel cell powered car, the 1966 Electro-Van. You’ll find the 1967 Camaro SS Indy 500 pace car, from the first year of Camaro production. And the candy-apple red 1953 Skylark convertible, arguably the loveliest Buick.

And it’s not just cars. GM built the first mechanical heart pump in 1952, used in the very first open heart surgery. There it is, sitting on a shelf! (The pump, not the heart.)

But it's the collection of one-of-a-kind 'Vettes impressed me the most. There are many special collections of Corvettes on this earth, but none like this one. Consider this your golden ticket to Corvette heaven.

From the day it first appeared in public, on display at the tony Waldorf Astoria Hotel in New York City in January 1953, the Corvette has defined desire in the minds of American car fans. People didn’t know what to make of this Euro-inspired, fiberglass-bodied two-seater at the time—the first ever American sports car. That spring, the Wall Street Journal proclaimed: “Chevrolet will go into production this June on its glass fibre plastic sports car, the ‘Corvette’.” GM only built 300 Vettes that first year, all of them Polo White. What you see here is one of those 300. The first ever Corvette was scrapped. Still, one of the original 300 ain’t bad. Under the hood: a 150 horsepower 235.5 cubic inch V8. The original price: $3,498. It turned out to be a banner year for GM. Buick introduced the Skylark and Cadillac the Eldorado. All of Motor City celebrated; the Red Wings won the Stanley Cup that year (1953-4), and the Detroit Lions won the NFL championship.

Inspiration can come from the least expected places. GM’s styling VP, Bill Mitchell, was fishing off the coast of Florida when he caught a mako shark. If you have ever seen a mako, you know they’re not pretty. But Mitchell was a design genius, and the shark inspired this beauty, the one-of-a-kind 1961 Corvette Mako Shark. The coolest thing about this concept car? Take a close look and you can clearly see the lines of the second generation Corvette, the legendary Sting Ray (1963-1967), widely considered the most beautiful production Vette to this day. GM tried out a bunch of engines in the vehicle; right now, there’s a 1969 427 under the hood, good for 425 horsepower.

If you haven’t figured it out yet, Bill Mitchell—now the head of GM styling in ‘69—was a fishing nut, and found inspiration in the way sea creatures moved through the water. The inspiration can be seen not just in this 1969 show car’s shape, but its paint, the way the soft underbelly gives way to the dark exterior, just like on a real manta ray. The car was designed with twin-auxiliary brake lights that popped out of the rear deck under hard braking. Once again, GM had a banner year in 1969. The company designed the guidance and nav systems on the Apollo 11, which landed on the moon that July.

If you’re up on automobile news, than you’ve heard that Chevrolet plans to unveil the first ever production mid-engine Corvette in 2018. As in, engine behind the driver. Will that actually happen? Is it a good idea? Who knows? GM has toyed with this idea for decades, and has built some mid-engine Vette prototypes. In 1972, the company crafted two XP-895 concept cars to test out the feasibility of alternative engine layouts and body materials. One was made with a steel body, and the other—the one you see here—with an aluminum body. The experiment was a joint venture between GM and Reynolds Aluminum, maker of that sexy household product known as aluminum foil. A 400 cubic-inch V8 is mounted transversely behind the cockpit.

If you believe GM really plans to unveil a production mid-engine Corvette, consider this: In the early 1970s, the company built a rotary engine Vette, with the motor placed behind the cockpit, sterling silver paint, gullwing doors, and a big window over the back of the car, so the rotary engine could be seen. “Industry observers believe this experimental mid-engine four rotor Vette will go into production with few, if any changes,” one car writer from the Chicago Tribune recorded. Of course, it never happened. In fact, when GM scratched the idea, design chief Bill Mitchell replaced this concept’s engine with a small-block V8 and rechristened it the Aerovette.

Some of you may have seen this concept on display at the 2009 Chicago Auto Show. If you didn’t, no worries. Check it out in the Michael Bay movie Transformers: Revenge of the Fallen, which came out that year. (In the film, this vehicle transforms into a robot called Sideswipe.) At the car’s debut in Chicago, Chevrolet’s design chief Ed Welburn noted, “This Stingray concept really plays homage to the ’59 Stingray racer that Bill Mitchell developed, and the 1963 Corvette Stingray split window coupe.” When this concept appeared, one Autoblog scribe wrote, “Don’t expect this concept to spawn any sort of production vehicle.” Lo! As fate would have it, the C7 Corvette Stingray debuted in January 2014, clearly drawing some design language from this concept, and renewing the Stingray name. It’s hard to fathom, given that first 150-horsepower Corvette of 1953, how far we have come. One can only imagine what kind of Corvette will come next, and how far we have yet to go.

*A wink at you, Joe Schulte. Thank you!

A.J. Baime is an editor-at-large at The Drive. He is the author of Go Like Hell: Ford, Ferrari, and Their Battle for Speed and Glory at Le Mans.