They're on the same team, but that doesn't mean they always play nice. 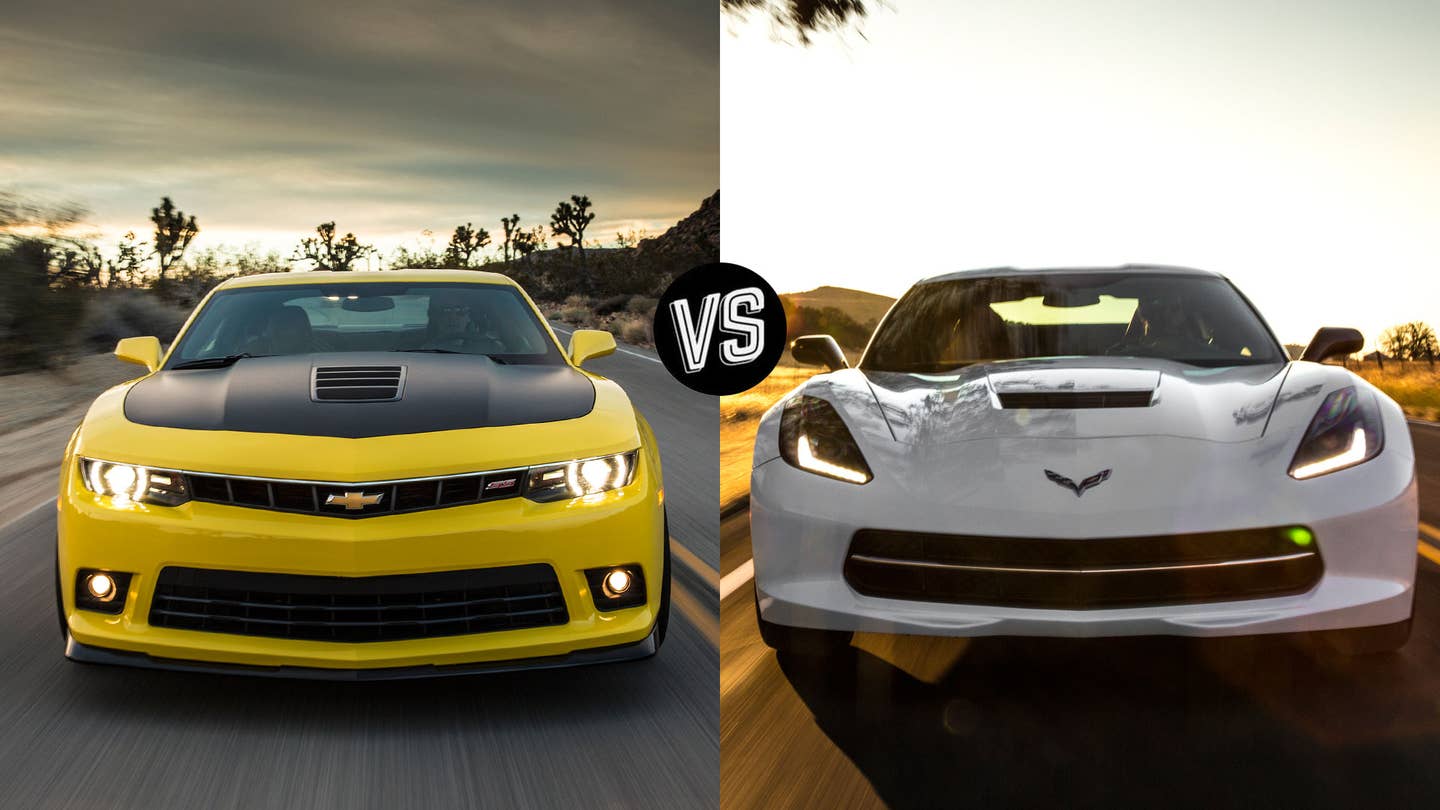 The bow-tie brothers come from a brawling family, and they're eager to take on their natural enemies: Camaro versus Mustang, Corvette versus 911. Thing is, when two born scrappers grow up in the same household, there's bound to be a fracas or two before the breakfast dishes are even cleared away. Sometimes mutual respect gives way to sibling rivalry. Here are ten times the Corvette and the Camaro ended up going toe-to-toe.

1968: a Camaro is first to be immortalized by Hot Wheels

The Corvette was introduced in 1953 as a concept car, and by 1968 had grown into the mako shark inspired C3. But when Mattel's new toy line rolled out, based on the best of American car culture, it was a blue custom Camaro that was among the first Hot Wheels.The Camaro was first on the shelf for many young car enthusiasts, and first in their dreams.

Chevrolet pitched the Camaro to America as a “small vicious animal that eats Mustangs.” Initially, Camaro displacement was limited to 400ci to keep the General's mongoose from stepping on any toes. GM's Central Office Production Order program blew the doors off that plan, allowing well-heeled Camaro fans to order up a 2+2 with the 472ci nuclear option. The ZL1 was the most powerful engine GM offered to the public, and now you could get it in a Camaro.

1970: Camaros and Corvettes compete in same class at 12 hours of Sebring

The 'Vette made its mark in endurance racing years before the Camaro even existed, but by the 1970s the Bowtie baby brother was an SCCA champion. When the 12 hours of Sebring rolled around, the Camaro was ready to punch above its weight, and Camaros and 'Vettes went toe-to-toe in the GT 5.0L+ class. The day belonged to the likes of Mario Andretti in his Ferrari 512S and Steve McQueen in his Porsche 908, but Dick Lang's 'Vette would finish first in its class, just ahead of the Camaros.

By the late 1970s, the Mustang had given up all pretense of performance, and the Camaro would soon follow. The Z/28 took a hiatus, with the hottest version of the Camaro available being the 165hp Rally Sport. Meanwhile, even as V8s were being choked by the new emissions regulations, the 'Vette still had a 205hp L82 option. Power for both cars bottomed out, but the 'Vette was still the king.

1984 dawned with an automatic-transmission Corvette that could once again haul the mail. Problem was, the Camaro could haul it better. While the first C4 'Vettes were hamstrung by four-speed automatic transmissions, the five-speed manual Camaro Z/28 was quicker to sixty by a second or so.

By the late 1990s, the hierarchy had re-established itself. The Corvette was once again the fastest in the GM lineup, and the Camaro was its more practical, family-friendly cousin. And then the cops got hold of it. The B4C-package offered most of the go-fast goodies of the Z/28 Camaros with a no-frills approach that eschewed air-conditioning and leather seats for lighter weight and room for your utility belt. Now, Camaros were helping to haul in 'Vette-driving scofflaws.

Despite radically outselling the legend, the Camaro's sales streak would have a hiatus. The Corvette couldn't be touched, but in the early 2000s the Camaro went away for a while. The last of the third generation cars were outfitted for the 35th anniversary, but it wasn't much of a birthday party.

When it returned, thanks to the hype of the Transformers movie, the new Camaro was an expensive proposition. By comparison, the tried-and-tested C5 Corvette was a bit of a bargain, even if you didn't opt for the Z06 variant. If you were looking at a mid-trim Camaro, it wasn't just cheaper to buy the faster Corvette, the insurance was cheaper too.

It's the same engine, but little bro can bench more? That's embarrassing. According to official specification, the new Stingray Corvette makes 460hp from its all aluminium V8, while the Alpha-platform Camaro SS makes 455hp. However, when strapped down to Hennessy Performance's dyno, the Camaro put 431 ponies to the road, while the Corvette put down 410hp. That means little bro gets the top bunk.

Chevy used to debut its technology in the Corvette first, while the Camaro got the hand-me-downs. But with the Camaro outselling the 'Vette by a factor of five to one, the General decided its tiny new 10-speed would get assigned to the younger sibling first. The Camaro ZL1 isn't officially out yet, but its 640hp supercharged V8 and 10-speed automatic should worry Shelby Mustang owners and Stingray drivers alike.