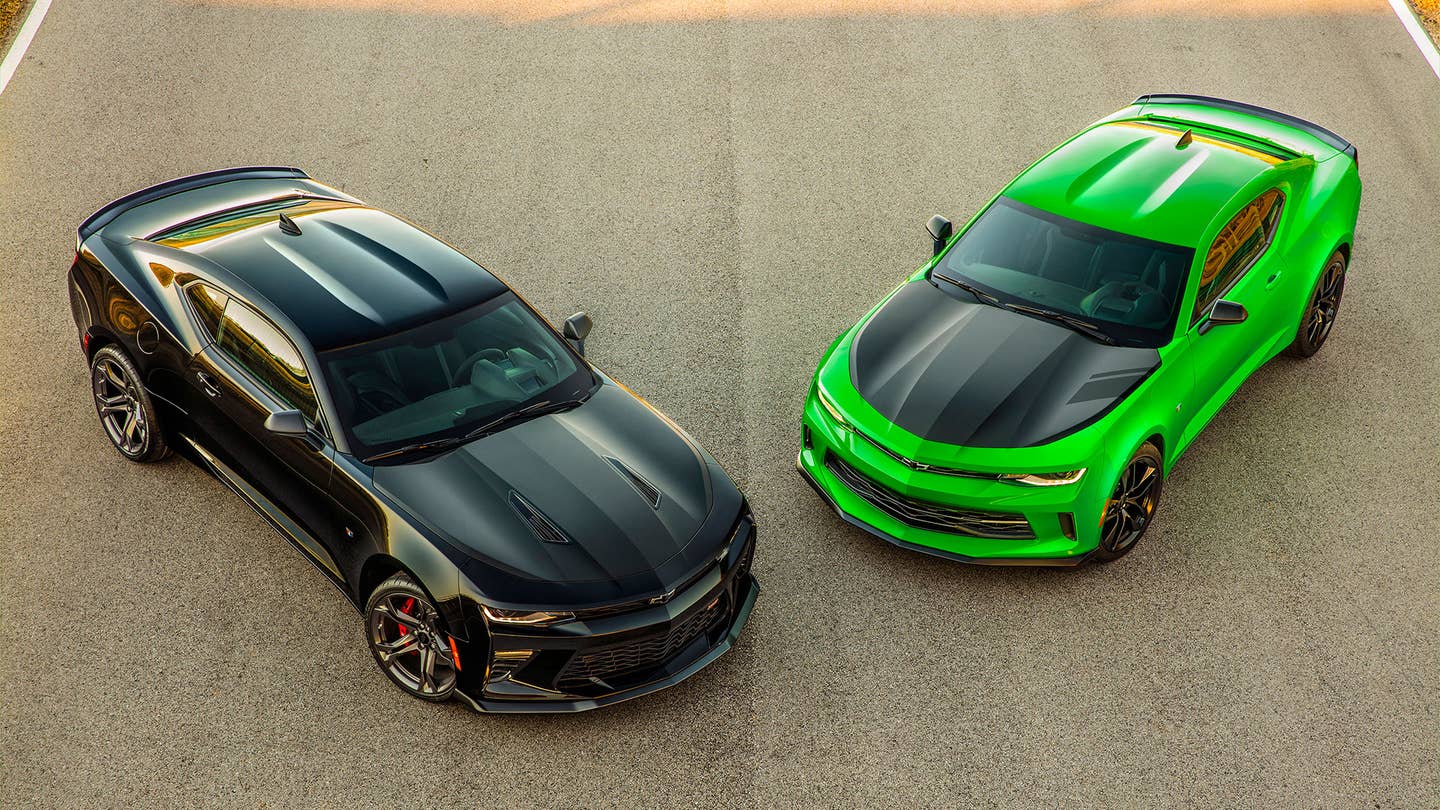 The last Chevrolet Camaro 1LE was an unexpectedly charming machine. Arriving late in the fifth-gen Camaro’s lifespan, it culled a bunch of ride, handling and trim parts from the supercharged ZL1 and slapped them onto a regular Camaro SS, giving it 90 percent of the 580-horsepower monster ’Maro’s on-road prowess at roughly two-thirds of the price.

Chevy must have been thrilled with how it was received, because instead of waiting half the sixth-generation Camaro’s lifespan to give it the 1LE treatment, its firing the handling upgrade cannon less than a year after the new model hit the streets. And while it still doesn't bring any extra power to the table, the 2017 Camaro 1LE, unlike the last time around, will be available in both V6 and V8 versions.

For six-cylinder 1LE duty, the biggest upgrade is the whole kit and kaboodle of the Camaro SS’s FE3 suspension—rear cradle mounts, dampers, ball-mounted rear toe links and stabilizer bars, the works. It also scoops up the SS’s fuel system, which is better optimized for high cornering loads. A mechanical limited-slip diff helps shunt power between the rear wheels; a cooling package for the engine oil, transmission, and differential help handle the temperatures generated by track time; four-piston Brembos up front help haul the V6 1LE down from triple-digit speeds. Forged 20-inch aluminum wheels wrapped in Goodyear Eagle F1 rubber are also on deck, plus a new grille that increases airflow and gives the car a meaner look.

On the V8 end of the spectrum, the big news is the new FE4 suspension, which provides a sportier setup for the springs, stabilizer bars and Magnetic Ride dampers, which are standard V8 1LE Camaros. An electronic limited-slip differential (like the one found on the Corvette Stingray) finds its way into the back of the powertrain. Goodyear Eagle F1 Supercar tires with a custom compound are fitted to all four 20-inch wheels. Six-piston Brembos with 14.6-inch rotors are up front. Recaro bucket seats and a track-spec cooling package are thrown in for good measure.

Both V6 and V8 versions pick up matte-black treatments for the hood and rear spoiler, as well as a dual-mode exhaust, a faux suede-wrapped steering wheel and short-throw shifter. GM’s Performance Data Recorder is optional, and optimal Facebooking of your track-day shenanigans. And, as Christy Brown intended, every 2017 Camaro 1LE will come strictly with a six-speed manual transmission.

All told, the upgrades reportedly allow the V6 1LE, which is officially called the LT 1LE, to lap Willow Springs about as quickly as the previous V8 Camaro 1LE. The new V8 1LE, aka the SS 1LE, runs around the same Southern California track three seconds more quickly than the latest Camaro SS.

Did track-ready handling package for a six-cylinder Camaro just cause milk to shoot out your nose? Get with it. In this new sixth-generation car, the V6 model has been upgraded from rental car fleet mainstay to bargain sports car. It drives like a miniature Corvette; a suite of handling upgrades should make it a riot. And, if Chevrolet keeps the 1LE upgrade to around $3,500 (like last time), you might be able to nab a V6 1LE for a hair over $30,000. That’s one hell of a bargain.