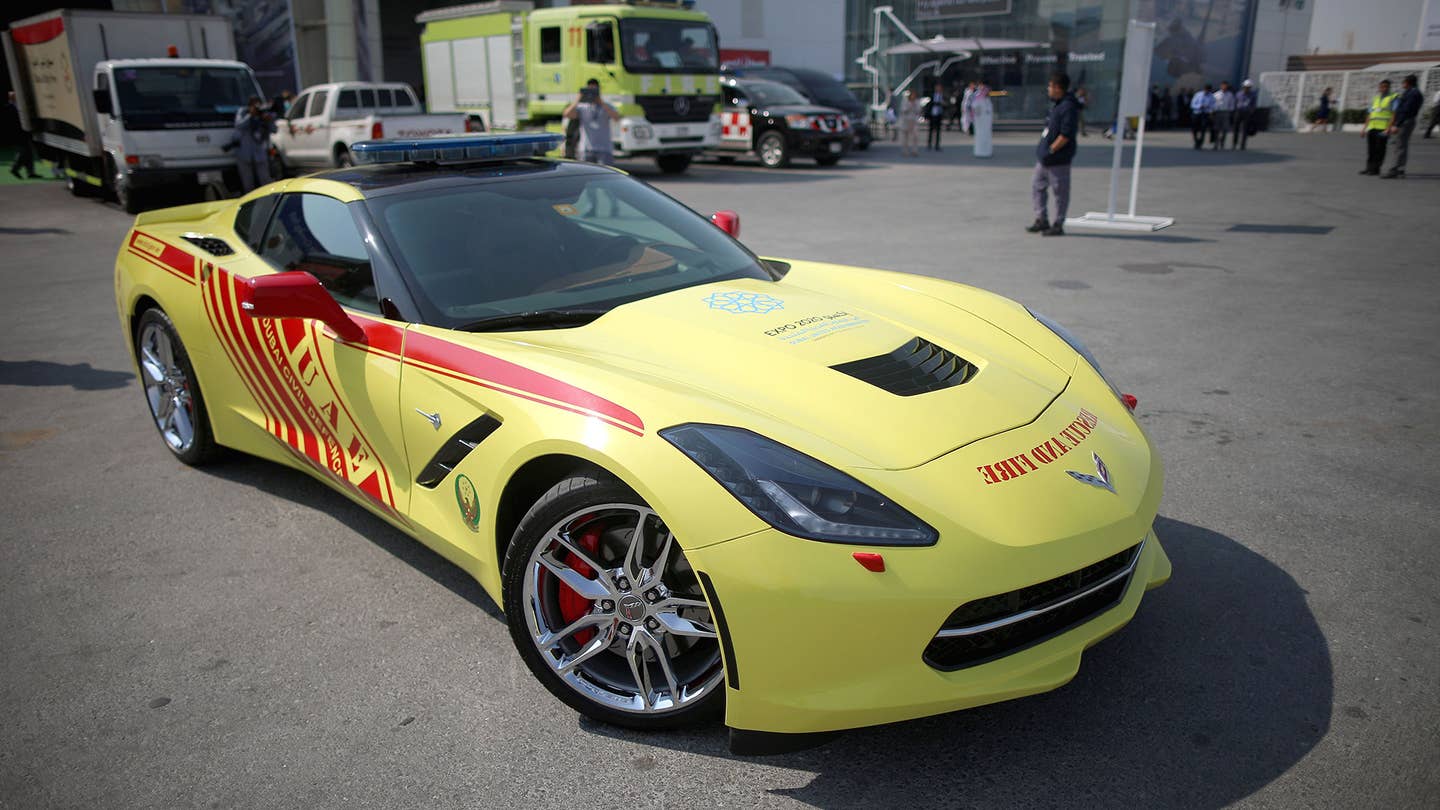 Dubai, home of the some of the wildest and least practical law enforcement vehicles this side of Gotham City, has expanded into the exotic fire truck game. Well, in a sense; as Bill Clinton might say, it depends on what the definition of "truck" is. Because no matter how much fire-fighting equipment you strap on board, most of us would still probably call a Chevrolet Corvette a sports car.

It's not like Dubai's Civil Defense department is installing an eight-story hydraulic ladder on top of their 'Vettes, either. The two 2016 Corvette Stingrays' resume of Rescue Me-spec modifications extends only as far as a range of vaguely-described "monitoring devices," a first-aid kit, and a fire extinguisher, according to GulfNews.com. By that logic, you could convert any car into a fire truck with a ten-minute trip to Home Depot.

Nevertheless, Dubai is not only calling its fiberglass-bodied sports cars "trucks, it's asking the folks at Guinness World Records to do the same. The Civil Defense authority has reportedly begun the process of registering the Corvettes with the estimable keepers of useless factoids in order to have the 'Vettes registered as the world's fastest fire trucks.

"The Guinness World Records’ administration have confirmed that there is no registered fire truck that with the same specifications as ours,” said Lieutenant Colonel Hussein Al Rahoomi, Head of Station Affairs Department at Dubai Civil Defense. When phrased like that, we at The Drive do not find that hard to believe.

But here's the kicker: Even if, by godly grace or massive bribe, Dubai convinces the Guinness World Record authorities their Corvettes qualify as fire trucks, they would still be nowhere close to claiming the title of fastest fire truck on the planet. According to Al Rahoomi, the department's Corvettes have been modified to reach a top speed of 211 miles per hour. While that's 30 mph faster than a stock Stingray, it's still nearly 200 miles per hour slower than Earth's current fastest fire truck, the jet-powered Hawaiian Eagle. And that sucker is an actual truck.

(Note: We don't know why Siri narrates the following video, but it's pretty entertaining.)