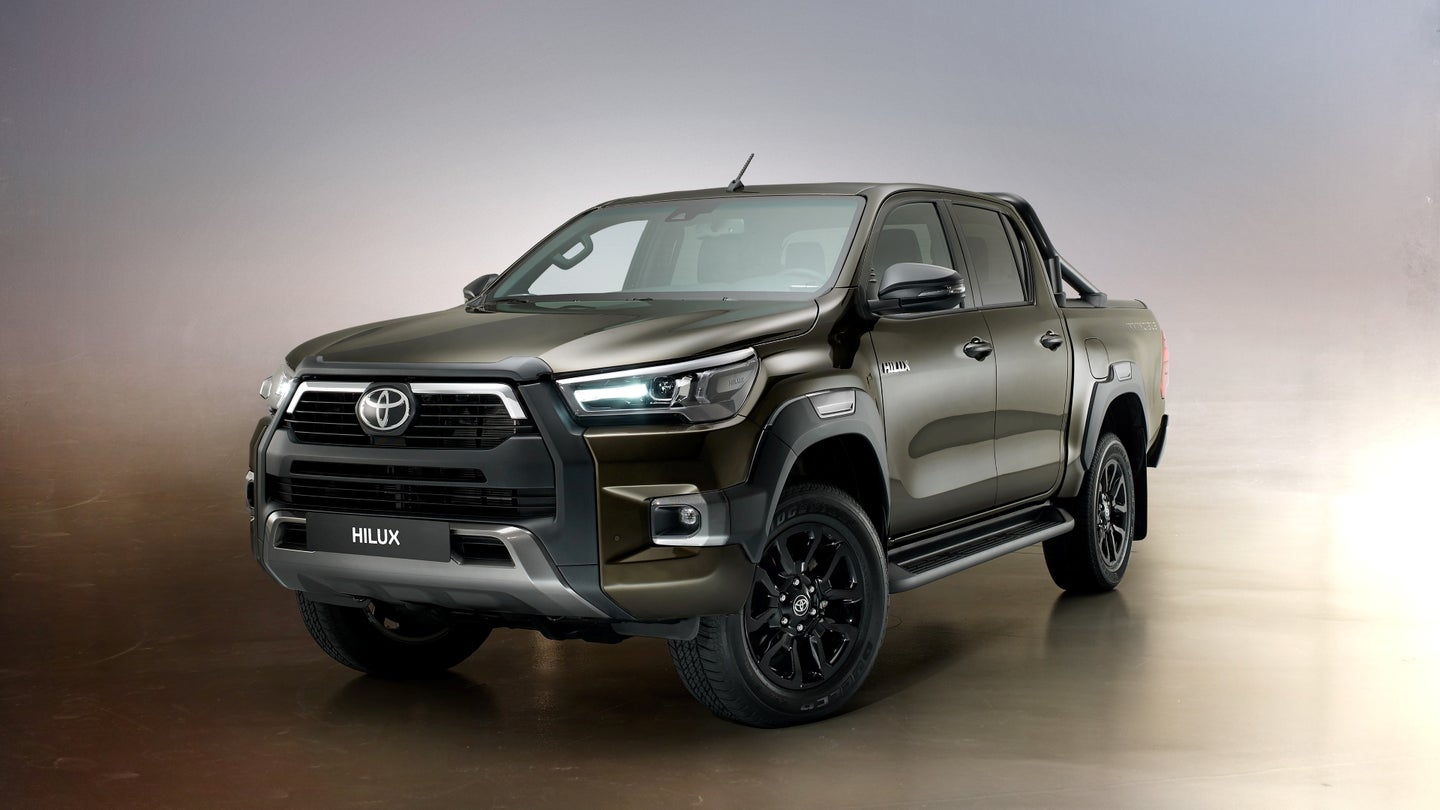 After surviving two Fernando Alonso-induced barrel rolls at this year's Dakar Rally, Toyota is rewarding its famously indestructible overseas-only pickup with yet another refresh. Sporting a new face, new engine, reworked mechanicals, and more tech is the 2021 Toyota Hilux—which, by the way, you still can't buy in the United States.

While we're fans of the Hilux's updated design, we suspect most owners, potential and otherwise, aren't the sort of people to care too much about cosmetics, so let's get down to the things that really matter.

For 2021, Toyota is gracing the Hilux with a new 2.8-liter turbodiesel four-cylinder good for 201 horsepower and 369 pound-feet of torque (up from the last 2.8-liter diesel's 177 hp and 330 pound-feet). The new engine apparently returns a respectable 30 miles per gallon and can be paired to either a six-speed manual or six-speed automatic. A 2.4-liter turbodiesel or 2.7-liter gas engine can also be had.

The Hilux's touchscreen now measures eight-inches and comes with both Apple CarPlay and Android Auto. Apart from the bigger screen, Toyota has made the Hilux life more comfortable via a handful of suspension and steering tweaks including retuned shock absorbers, an improved leaf spring design, and new bushings. On the more digital side, there's now an electronic feature that recreates the effects of a mechanical LSD on 2WD models, updated stability control, and a new tire angle monitor.

As before, the Hilux leans into its relentlessly tough reputation with a range-topping Invincible trim that gets its own front grille and skid plate, fenders, door handles, wheels, black interior trim, keyless entry, and gets the word INVINCIBLE stamped loud and proud on its tailgate.

For those who have never seen a Hilux before, it's sized pretty similarly to the Tacoma with the latter truck measuring a few inches bigger and longer in most dimensions, depending on cab choice. The two trucks share that aforementioned, 160-horse 2.7-liter four-cylinder but the Tacoma gets the option of a 3.5-liter V6.

Even though we most certainly won't be getting this new Hilux here in the U.S., it's important to note that this is, at the end of the day, merely a facelift and that an all-new Hilux will be coming sometime in the future. Perhaps then the company can consider bringing it to more markets, because who wouldn't want a truck that can do this?