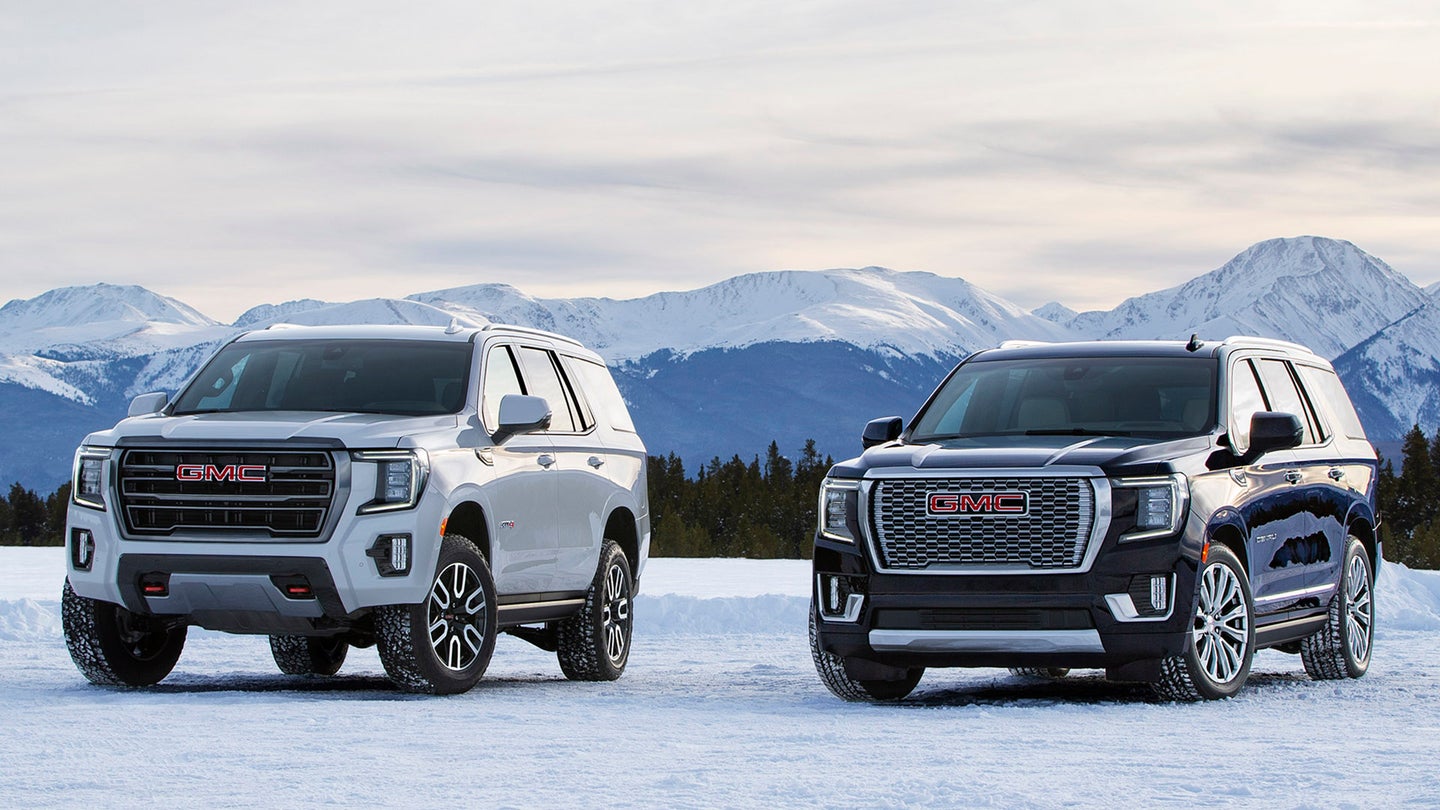 Fancy that: GMC has taken the wraps off of its all-new 2021 Yukon and Yukon XL flagship SUVs. Although based on the new Chevy Tahoe and Suburban, the GMC versions have dodged those trucks' much-discussed Silverado-style front end in favor of styling that looks decidedly more handsome. The Yukon Denali now carries itself like a proper American luxury truck, while the new Yukon AT4 is its fun-loving, off-roading alter ego.

Both the Yukon and Yukon XL have physically grown, measuring almost five inches longer between the axles and offering more than 20 additional cubic feet of max cargo room compared to the outgoing version. The shorty Yukon in particular is over 6 inches longer than the 2020 model, while most of the growth on the XL truck comes from a longer wheelbase. Both see massive increases in third-row legroom and cargo space thanks to the new independent rear suspension, just like in the Suburban and Tahoe.

To help the newer, bigger Yukons negotiate their way into tight parking spaces a little easier, they're now available with nine different around-car camera views, the most POVs available in the segment, according to GMC. This follows GMC's push to make towing in their pickup trucks as easy as possible with about a billion different cameras and 3-D view options to keep an eye on your trailer—speaking of which, towing specs haven't been released yet.

Also class-leading is the optional 420-horsepower, 6.2-liter V8. For the more efficiency-minded, the 2021 Yukon and Yukon XL can be had with a standard 5.3-liter V8 or 3.0-liter straight-six turbo diesel. Both V8s feature stop/start and cylinder deactivation that lets them run on as few as two cylinders, and a 10-speed transmission runs the show.

The 2021 GMC Yukon and Yukon XL can be had in either the luxurious Denali trim, which we all know (and based on sales, love), or the new AT4 off-road package. AT4 is GMC's push to make a genuinely off-road-capable version of every vehicle, an argument bolstered here by a two-speed transfer case, skid plates, and a higher-clearance front bumper. Ground clearance (not given) can be increased by the adjustable air suspension, so the AT4 should get you through most normal-person slippery situations. But you won't get that far off-road in something this big without a rear locker, which isn't available (though its electronic limited-slip differential will help).

The real news, perhaps, is on the inside. While the more utilitarian AT4 gets a cabin carried over from the recently-refreshed Suburban—not bad, but not unique—the Denali sets itself apart with completely different, much swankier interior of its own for the very first time. With its genuine wood trim, upgraded seats, and four color options, well-heeled patrons of the Four Seasons in Dallas no longer need to leave their nests of luxury once they venture out onto the road. Denali, AT4 and SLT versions of the Yukon can also be equipped with a segment-first Power Sliding Center Console that slides back up to 10 inches to free up more floor space. Y'know, for activities.

The air suspension will lower the body slightly at speed for better highway fuel economy; raise it for off-road shenanigans. With the air suspension at its highest setting, the Yukon AT4 boasts a 32-degree approach angle. If you want something more solid than air underneath, GM's performance car-derived Magnetic Ride Control suspension makes an appearance here as well, continuously adjusting its dampers to minimize unwanted movement and vibrations on the road.

To be built in Arlington, Texas, the 2021 GMC Yukon and Yukon XL will hit dealerships this summer. Like the outgoing model, expect it to start somewhere around $50,000, and the Denali to top out much, much higher than that.