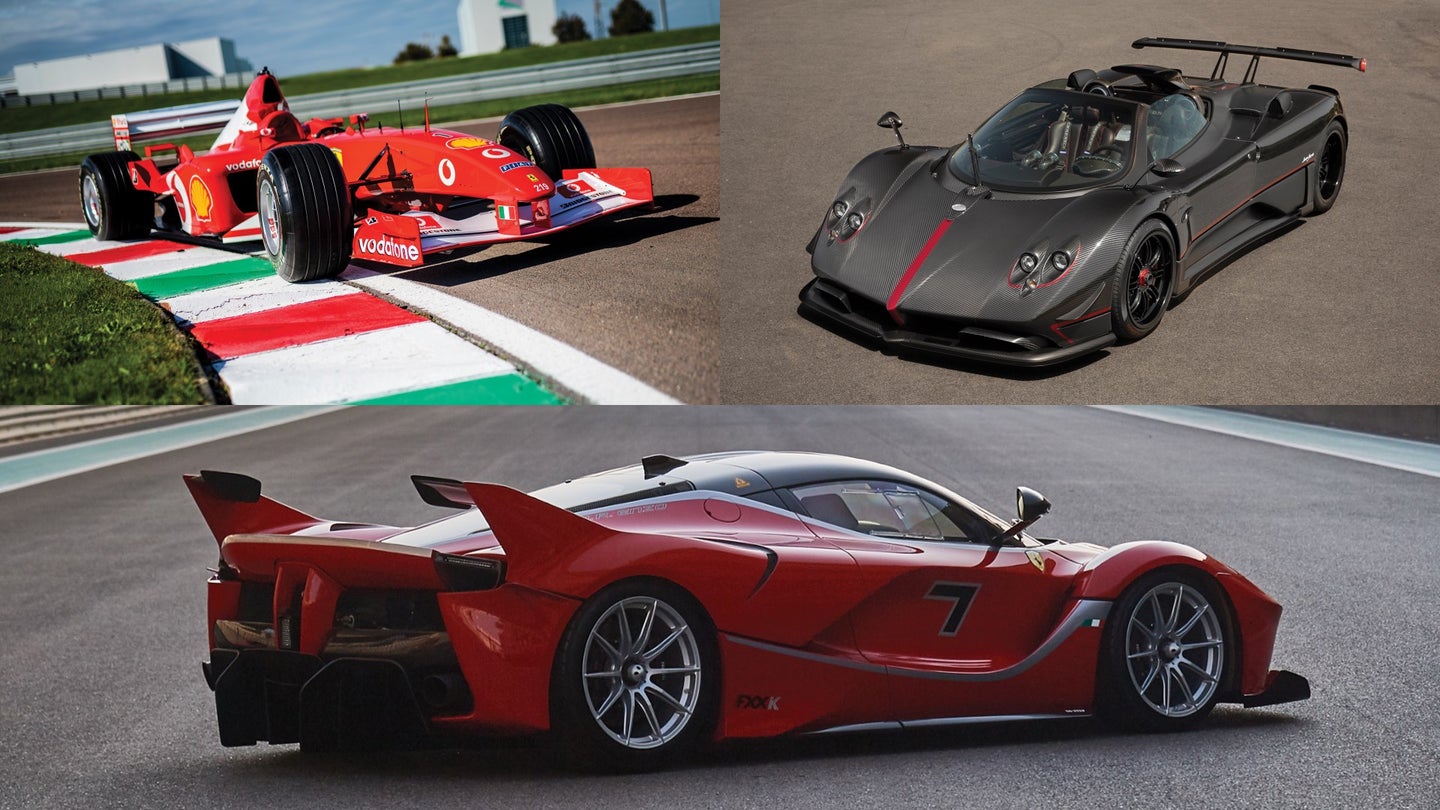 This past weekend, Yas Marina Circuit in Abu Dhabi hosted both the final Formula 1 Grand Prix of the decade and a jet-setting collector car auction, which saw 40 cars cross the auction block and $31.3 million change hands. Just three cars accounted for more than half that pile of cash, all of them Italian, and only one of them street-legal. Let's have a look at the kind of cars that'll make multimillionaires fly across the globe.

A track-only hypercar based on the Ferrari LaFerrari, the FXX-K is as fast as its half-censored four-letter-word of a name implies. Its 6.3-liter naturally aspirated V12 joins forces with a mild-hybrid system to generate a maximum of 1,036 horsepower, all of which is sent to the rear wheels through a seven-speed semi-automatic transmission. Only 40 were built and were originally sold for a price speculated to be between $2.6 and $3 million, meaning the owner of this early FXX-K collected a tidy profit on its sale for a whopping $4,281,250.

Its name may be uninspired, but the engineering behind the F2002 was anything but; as it won 15 of the 19 Formula 1 Grands Prix that it entered. This specific car was driven to victory thrice, and at least once by Michael Schumacher at the 2002 French Grand Prix, securing the fifth drivers' title of his career. It should come as no surprise that this Ferrari drew a winning bid of $6,643,750, making it the second-most-expensive F1 car ever sold at auction, behind only—you guessed it—another Schumacher-driven Ferrari F1 car.

With a hammer price of $6,812,000, this one-off Pagani Zonda edged out the above Ferrari to become the most expensive car sold at the Yas Marina auction. Like the one-of-five Zonda Cinque Roadster on which it was based, the lightweight Zonda Aether derives power from a 7.3-liter AMG V12, though the Aether gets an extra 91 horsepower for a total of 760. In lieu of the Cinque's sequential box, the Aether also received a six-speed, H-pattern manual, an option rarely seen in Zondas. This combination is likely why the Aether is now the most expensive Zonda ever sold at auction, though that doesn't mean another Zonda can't raise the bar sometime down the road.