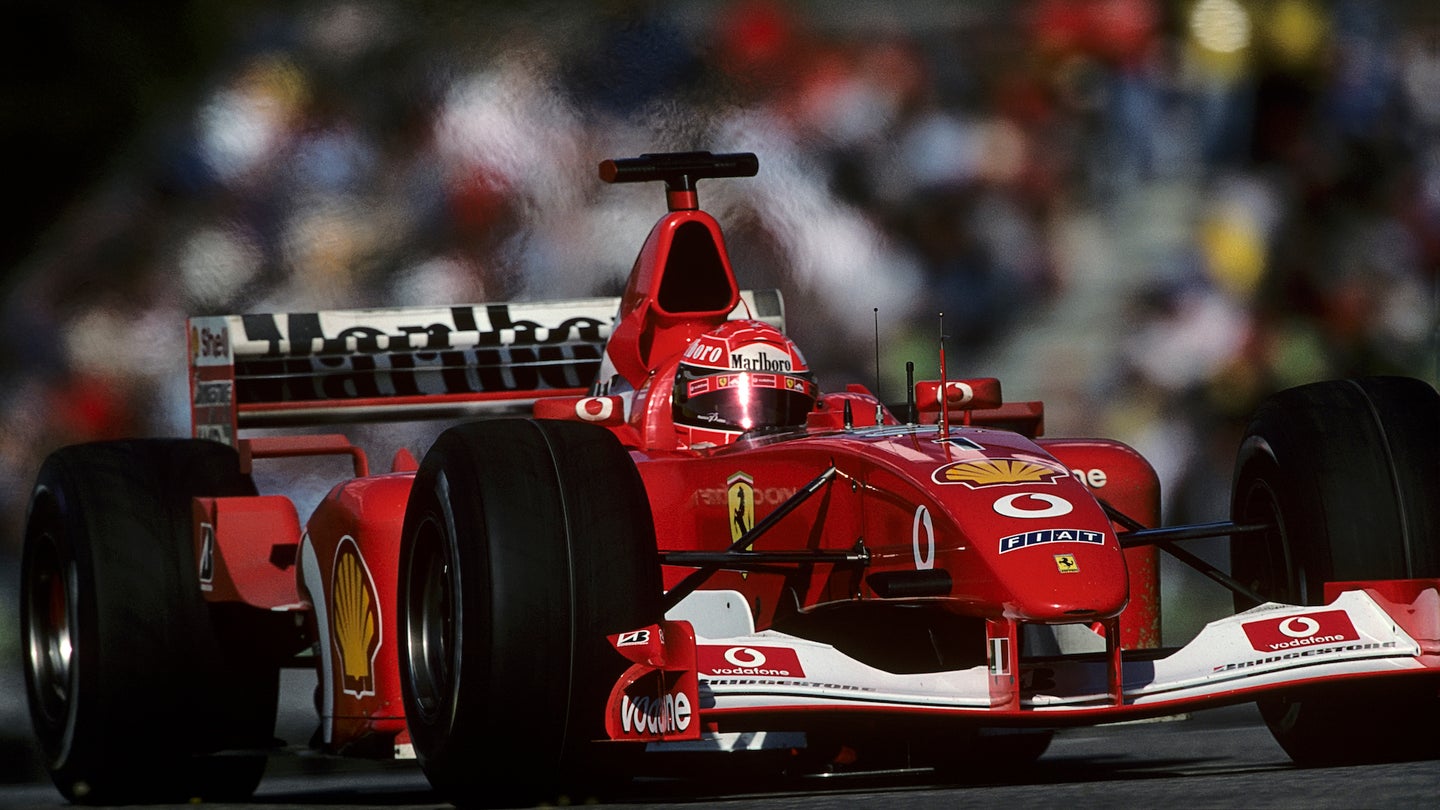 At the end of this year's Formula 1 season, one of Michael Schumacher's Grand Prix-winning Ferrari Formula 1 cars will be sold to the highest bidder in the oil-rich kingdom of Abu Dhabi.

Behind the wheel of the Scuderia Ferrari F2002, Schumacher claimed 11 Grand Prix wins on his way to winning the 2002 F1 World Drivers' Championship, which was the fifth of his career. It was also the earliest point in a season when a championship had already been decided, with a whopping six races remaining on the calendar. Schumacher claimed three of his 11 2002 wins with F2002 chassis number 219, which took the checkered flag in France, Austria, and San Marino (as pictured above). That very car will be the one hitting the auction block late this Autumn.

The auction itself will take place on Nov. 30 at Yas Marina Circuit in Abu Dhabi. After qualifying for the 2019 Abu Dhabi Grand Prix concludes, F2002 number 219 will lead a parade of cars to be sold at the auction—RM Sotheby's first major car auction in the Middle East—around the pit straight, before trundling down the pit lane and into the paddock so bidding may begin.

"The Michael Schumacher F2002, chassis number 219, is truly special; it represents one of the last Rory Byrne-designed, V-10 era cars and was like a guided missile in acquiring wins on route to a Championship won with sheer racing dominance," declared an RM Sotheby's official. "As a result, it remains as one of the most dominant Formula 1 racing cars in history and is fittingly joined by the ultimate in Ferrari supercars in the virtually as-new Ferrari F40."

Indeed, the F2002 will share the spotlight with one of the road cars considered Ferrari's greatest: the F40. This specific F40 is in prime condition, with "minimal mileage," a recent restoration under its belt, and the autograph of current Scuderia Ferrari driver Sebastian Vettel. As such, it'll be the consolation prize for whoever falls short of winning the greater Ferrari, touched by the greater driver.

RM Sotheby's did not release more details on the F40 at this time, but we're positive that will change as the auction nears.

The five-second forfeiture meant that Vettel had to settle for P2 despite crossing the finish line first, ahead of Lewis Hamilton’s Mercedes.