The owner even claims it to be road legal, so you can grab the 116-octane and hit the highway. 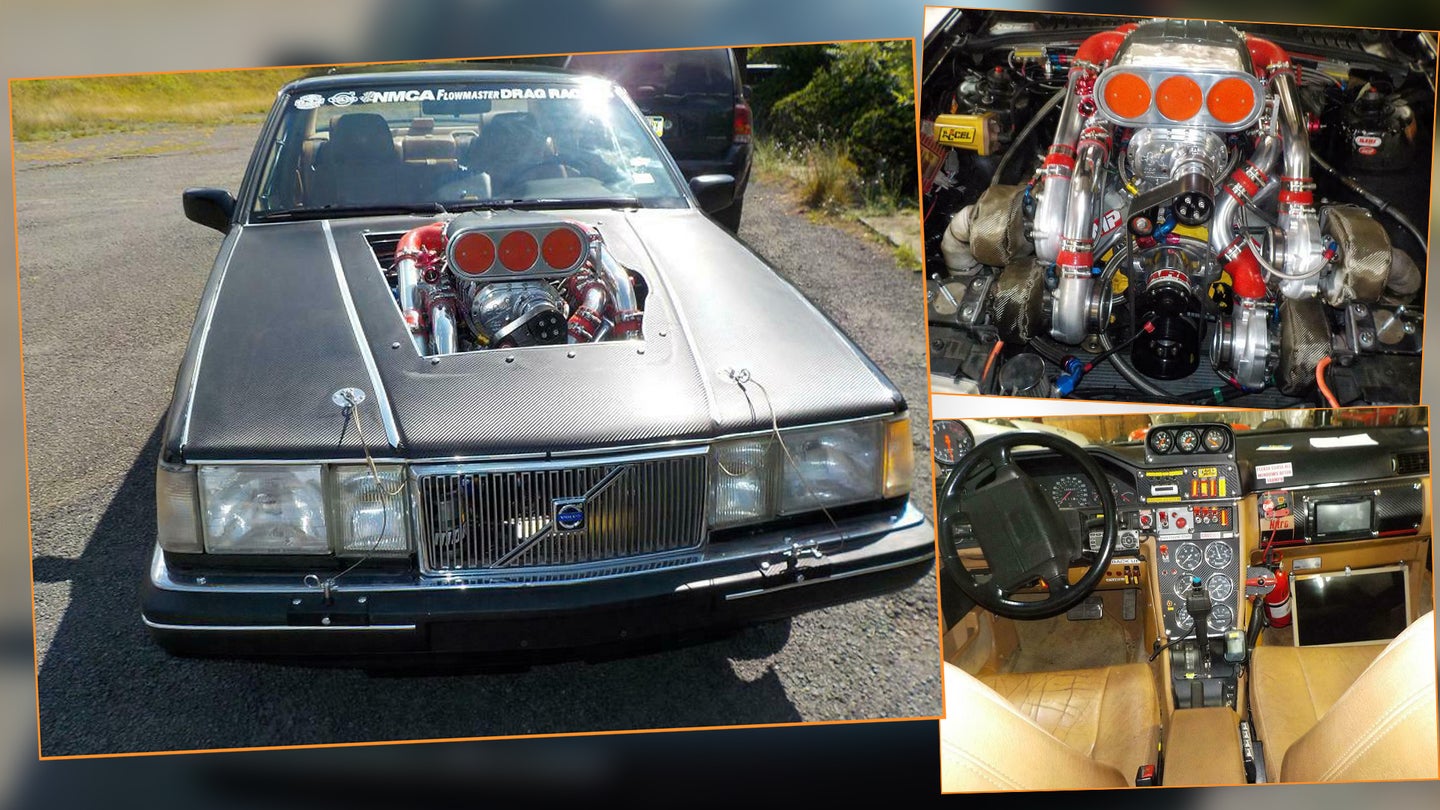 There are some crazy car builds, and then there’s this crazy car build: a 1992 Volvo 960 drag racer that not only features a ridiculous 10.3-liter V8 swap but one that’s supercharged and quad-turbocharged. If you're into that type of insanity and have an undying affinity for once-boring Swedish sheet metal, this might be for you.

The Volvo 960 has typically held a reputation for being slow and a bit anemic, though the owner of this particular car has certainly solved that problem. In place of what would normally be a turbocharged four-cylinder is a massive 632-cubic-inch Chevrolet big-block V8 custom built by Dart Racing out of Warren, Michigan.

It's got even more oomph on top of that thanks to a “marine” TBS supercharger, four XS Power AR70 turbochargers producing 27 psi total of boost, and a custom-tuned MegaSquirt port fuel-injection system with an MSD ignition setup. To keep all this extra fuel and air from overheating the thumping engine, a custom heavy-duty oil cooler has been fitted as well as two radiators—a racing four-core aluminum unit at the front supplemented by another radiator out back.

The result of these over-the-top mods: a fear-inducing 3,000 horsepower and 3,144 pound-feet of torque.

Power is then sent through a GM 4L85E four-speed automatic and a 3.73 PosiTraction rear differential. Laying it down to the pavement is a set of Weld Racing Wheels wrapped in Nitto Extreme Drag tires.

It seems like nothing was skimped on with this build. Better yet, the owner claims that it's totally street legal. It even comes with an aftermarket radio and GPS system, an integrated police scanner, and a few other supposed “electronic extras.” It's apparently reliable enough for a long-distance trek, but you'd have to regularly fill up with 116-octane racing fuel and probably be a masochist in order to daily drive this thing.

Sadly, the eBay auction for this car ended Wednesday morning with a top bid of $12,500 and the reserve not met. It would likely take a huge chunk of change to recoup everything invested into this wild sedan but as is the case with many modified vehicles, the builder usually winds up on the losing end when it comes to selling.

The painstakingly precise creation at last had its own debut in Monterey at The Quail: A Motorsports Gathering this week.