And you thought your old 240 wagon was tough. 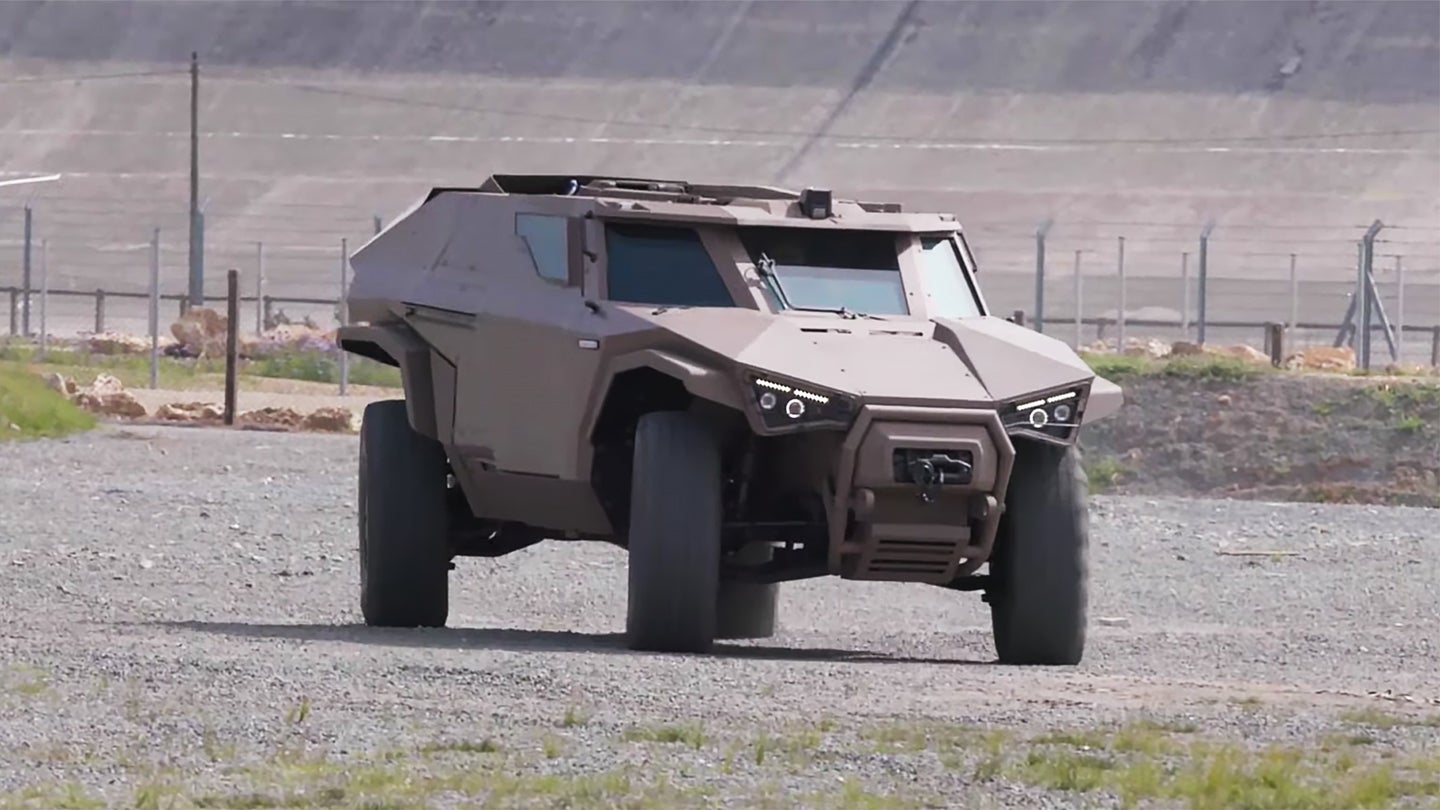 Volvo made its bones in back in the Eighties with tough-as-nails boxes, cars whose safety became the stuff of legends at a time when airbags weren't even a requirement. But your old 240 battle wagon has nothing on the Arquus Scarabee, a new light armored vehicle from Volvo Group subsidiary Arquus Defense that promises four-wheel steering, adaptive suspension, a payload rating of 4,000 pounds, and remote-control capabilities. It just might be the toughest Volvo yet.

Obviously, the Scarabee has about as much in common with the Swedish marque's current lineup as an old Volvo C303. Unveiled at this month's Paris Air Show, the Scarabee is one of several candidates to update the French Army's light armored vehicle fleet over the next decade, according to Popular Science. Like the U.S. Military and its own convoluted Humvee replacement process, France is in the process of modernizing its unwieldy group of domestic models dating back decades.

Representing a ground-up build by Arquus, a French concern owned by Volvo Group, the four-person vehicle weighs approximately 6.6-tons thanks to its advanced composite and steel protective armor plating. Power for the Scarabee, which means "beetle" in French, comes from both a 300 horsepower diesel engine and an electric 103-hp motor, both mounted in the rear. Hey, the name fits. The hybrid system will be useful in urgent acceleration; much like a McLaren P1, the Scarabee will also feature a “boost” mode that gives the driver the ability to send every ounce of power coming from both the motors to the four wheels.

Also like the McLaren hypercar, the Scarabee can be operated in an electric-only “stealth mode" that will allow it to approach a situation "without [a] thermal or acoustic signature," according to Arquus. The beefed-up electrics and larger battery, packaged underneath the cabin floor and protected by the underbody anti-explosive armoring, will also allow operators to conduct “a long, silent watch with all systems on.”

But its real party trick might be the all-wheel steering system that allows it to crab walk and gives it an incredibly tight turning radius. Not only that, but the Scarabee has adaptive suspension for two different clearance modes, including “High, for off-road mobility, and Low, for stand-by or air transport.” It's basically a Range Rover. Or a Rolls-Royce Cullinan. Or a BMW X7. It's certainly not an Oskosh M-ATV.

Simple air transport is a priority, and the Scarabee was designed to be flown in a C-130, Chinook, A400M, and air-dropped via a LTCO 12 platform. The Scarabee's minivan-like sliding side doors makes ingress and egress easier for operators working to make the Scarabee combat-ready in the confines of an airplane. The truck can be up and running 15 minutes after touchdown to serve a variety of missions, including reconnaissance with its 270-degree field-of-view Battlenet Vetronics System, RGL Cameras, radar, and anti-drone technology. Combat situations are met with multi-caliber weaponry, medium-range missiles, and other armament capabilities that haven’t been disclosed to the public.

The four-person interior is unique in having a central driving position up front, but in the near future a driver might not even be necessary. Arquus is working on remote control capabilities to allow operators to run the Scarabee like a drone truck from far behind the front lines. Popular Science also mentions plans for a motorized, autonomous equipment trailer that could also be directed independently.

These modern armored vehicles always look a bit like they rolled off the set of Starship Troopers, and the Arquus Scarabee goes further than most with the promises it's making. But there are reasons to not dismiss this little bug. Arquus is an amalgamation of several well-regarded defense contractors owned by Volvo, including Renault Trucks Defense (yes, that Renault), Panhard, ACMAT, and others. In building the Scarabee from scratch, the Arquus team leaned on Volvo Trucks for the engine, brakes, steering, transmission, and electrical system, according to PopSci.

Whether or not the French Army bites remains to be seen. But it's safe to say that Arquus will find at least a few other takers.