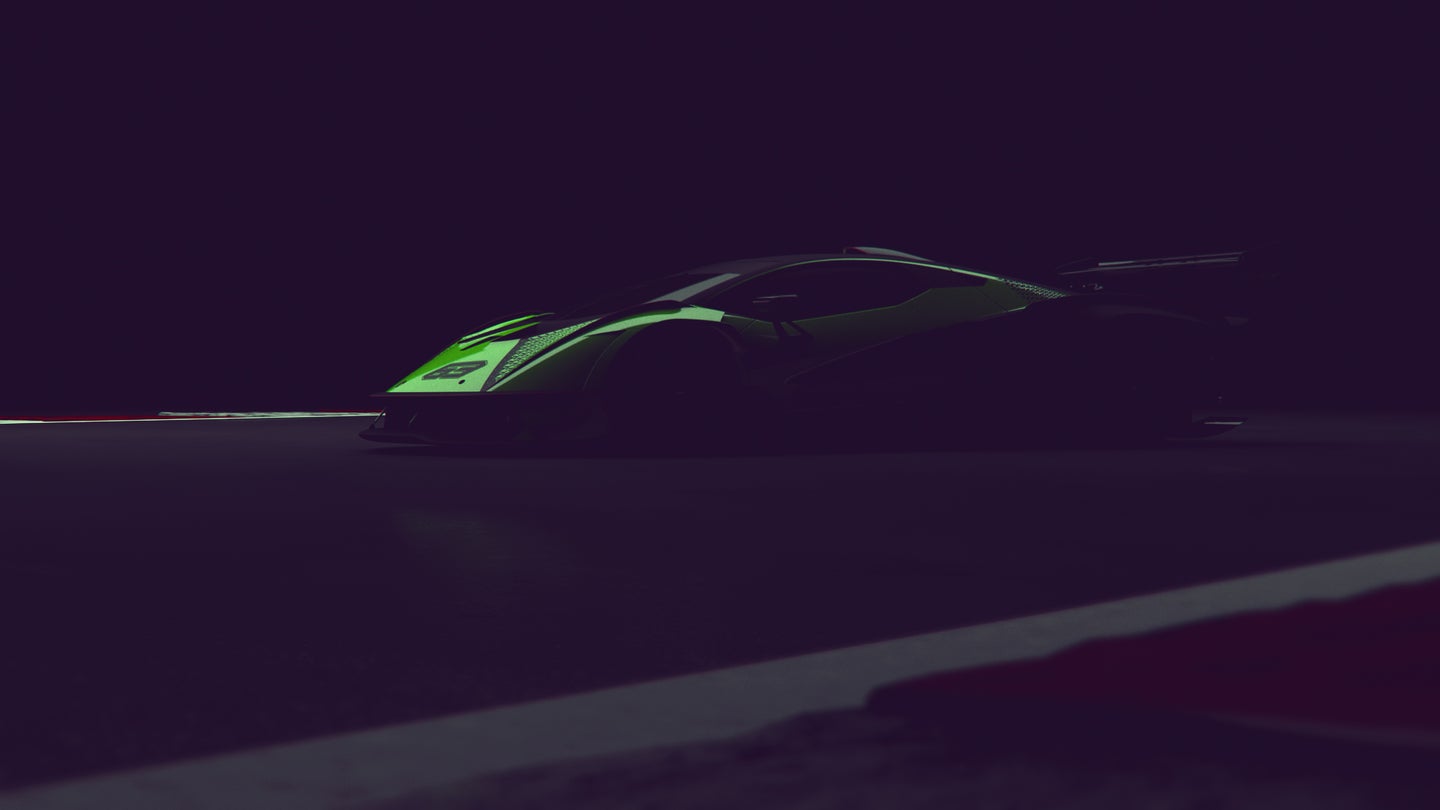 This Saturday, Lamborghini teased an upcoming hypercar with hardcore track credentials, set for an official unveiling next year. It's the first model built by Squadra Corse, the automaker's certified racing division, and it's coming to a race track near you.

The unnamed hypercar was previewed at the Circuita de Jerez in Spain. Lamborghini's latest halo car is both limited-production and track-only, so don't expect to ever see it drive into your local cars and coffee. The good news is that this anonymous hyper-Lambo will feature a good ol' naturally aspirated, 6.5-liter V12 that makes 830 horsepower, although hybrid assistance is possible. The car will feature enhanced aerodynamic parts that include a roof scoop, dual intakes on the hood, and a rear wing big enough to make the McLaren Senna feel inferior. Other juicy track components take the form of a carbon fiber monocoque with an aluminum front frame, six-speed sequential transmission, steel roll cage, and a new self-locking differential.

A video posted on Lamborghini's Youtube channel shows the car in more detail, highlighting its prominent aero bits and gobs of carbon fiber:

A report from last August suggested that Lamborghini was developing a machine based on the Aventador-derived SC18 Alston to campaign in FIA WEC's hypercar class at Le Mans. Although the just-announced model has all of the makings of a proper racecar, Lamborghini made it clear from the get-go that this vehicle will not be participating in any races on its watch.

The car that Lamborghini does intend to race in one form or the other is the Urus ST-X, which was announced alongside the Hypercar With No Name at Jerez. Lamborghini's Super SUV has been dolled up with a carbon fiber hood, larger air intakes, a carbon fiber rear wing, racing exhaust system, racing seats, fire extinguisher, and a roll-bar. It's also said to be lighter but retains the Urus' twin-turbocharged V8, although its power output has not been announced. The ST-X will make its racing debut at the 2020 Super Trofeo World Finals at the Misano World Circuit, driven by Tony Cairoli.

Lamborghini's Squadra Corse-made track monster will make its official debut in 2020. With the company's hybrid Aventador successor due for reveal at the same time, the beginning of the next decade will feature some wicked fast Raging Bulls.

The limited-run hybrid V12 is also the first car to use supercapacitors.