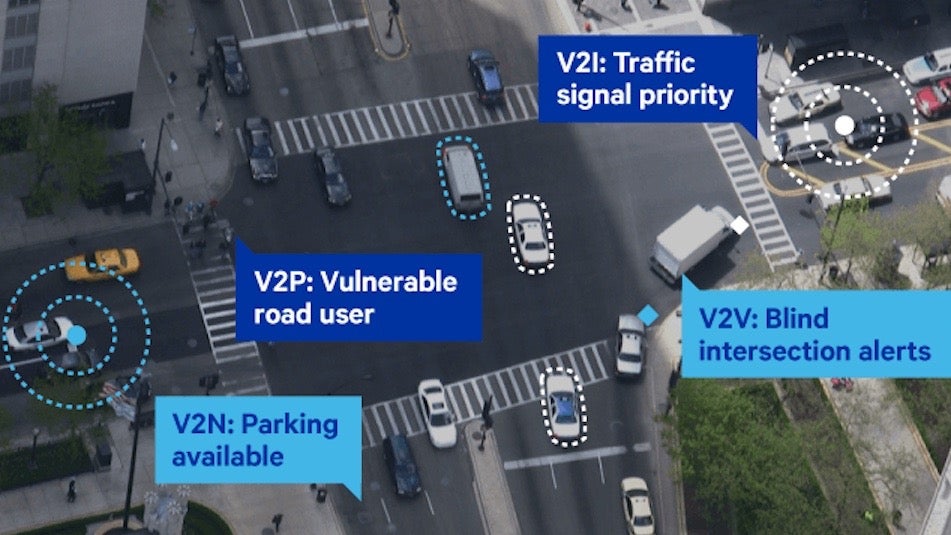 A coalition of companies is preparing to test a new variant of vehicle-to-vehicle communication, technology that allows cars to "talk" to one another with the primary aim of improving safety.

Ford, Qualcomm, AT&T, and Nokia will test a system called Cellular-V2X (C-V2X) at the San Diego Regional Proving Ground. C-V2X uses both a cellular network and direct connectivity as the communications medium, and includes provisions for both V2V and vehicle-to-infrastructure (V2I) communication. The two versions are sometimes collectively referred to as V2X.

The testing, expected to begin before the end of the year, is meant to demonstrate the potential advantages of using a cellular network to support V2X. The system uses a 5.9 GHz band as well as AT&T's cellular network, but Qualcomm claims companies will be able to provide the service without a cell network subscription. Ford vehicles will be used for the tests, but the partners hope to market the system to other automakers.

V2X communication is supposed to provide drivers with information about what is happening beyond their line of sight. The technology could, for example, alert a driver about an oncoming a car at an intersection where visibility is limited, or relay information about a crash or poor weather conditions from one vehicle to others further down the road.

These potential benefits have already attracted the interest of regulators. The U.S. Department of Transportation began testing V2V in Ann Arbor, Michigan, in 2012. But while some automakers have shown interest, the technology hasn't gone mainstream yet, and it still faces significant obstacles.

Achieving the benefits of V2X requires a critical mass of cars and infrastructure equipped with the technology. Given the slow rate at which cars already on the road are replaced with new models, that could take awhile. V2X will also require a lot of communications bandwidth, which will have to be set aside for the future. So even if the technology works, implementing it will require a lot of long-term planning.