Here's a quick recap of the Italian automotive legend’s fabled life and times. 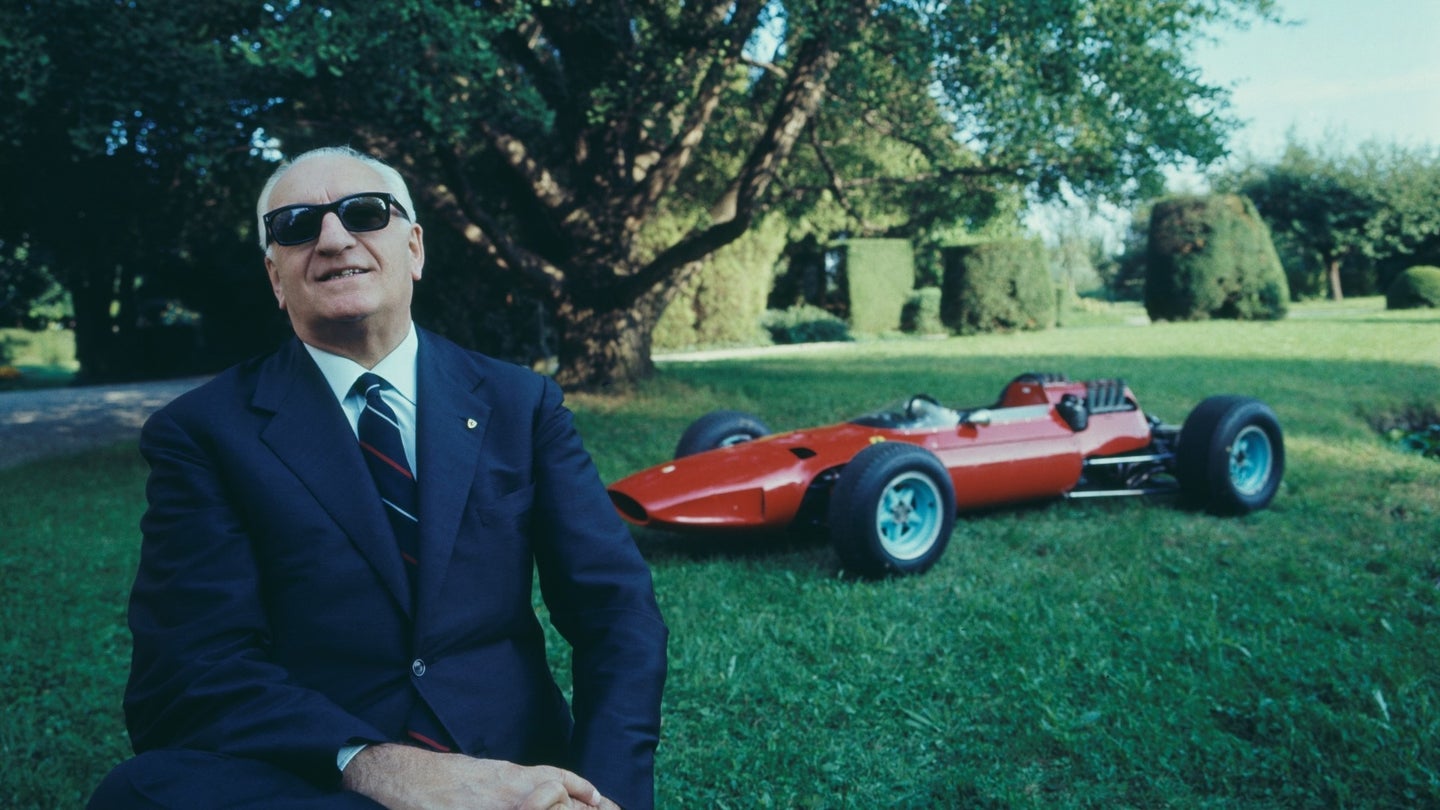 Enzo was born on Feb. 18, 1898, to one Alredo Ferrari, a metal fabricator, and his wife, Adalgisa Bisbini. Like many young Italian men of the era, he served in the army in World War I but was discharged from service after becoming very sick as a result of the 1918 flu pandemic. He then moved on into the auto industry, cutting his teeth as a test driver for Italian passenger carmaker CMN in Milan before becoming a racer for Alfa Romeo. Nine years into his tenure at Alfa, the company's racing division officially adopted the name Scuderia Ferrari and had started using the prancing horse logo that would go on to be one of the most recognizable emblems in the world.

After an apparent squabble with Alfa Romeo's top brass, Enzo Ferrari left the company in 1939 to start a factory of his own, manufacturing parts for other racing teams. Shortly after, World War II began and Enzo's factory took on war production for Mussolini. The factory was bombed by Allied forces, causing Enzo to move from Modena to Maranello. After WWII ended, Enzo began building cars under his own name in 1947, officially founding Ferrari S.p.A. The company remains based in the small town of Maranello to this day.

A year after winning the 1949 24 Hours of Le Mans with Luigi Chinetti and Peter Mitchell-Thomson behind the wheel of a Ferrari 166M, the company joined Formula 1 and hasn't taken a year off from the sport since. Ferrari is the only constructor to have participated in every single F1 season since the league's inaugural running.

Ferrari continued to make both race cars and road cars but Enzo was a racer at heart, famously disdainful of customers who saw his road cars as status symbols rather than beautiful pieces of engineering. His love of racing and, let's say, strong personality were two key factors in the now-legendary Ford-Le Mans debacle in 1963. For those unfamiliar, Ford had heard Ferrari was interested in being sold to the American automaker. Millions of dollars in audit and legal expenses later, Enzo abruptly and angrily pulled out of the deal upon hearing he would lose sole control of Ferrari's racing division. The conflict eventually led to the rise of the Ford GT40.

The mid-engined Ford was not the only non-Ferrari icon to have been created as a result of Enzo's brash personality. In the late-'50s, a tractor builder named Ferruccio Lamborghini bought a Ferrari 250 GT but was dissatisfied by its clutch which apparently needed to be rebuilt constantly. Upon hearing Mr. Lamborghini's complaints, Enzo essentially replied, "tough sh*t." As you might've guessed, Ferruccio Lamborghini went on to create, er, Lamborghini, arguably Ferrari's most direct competitor in the supercar game today.

The last Ferrari road car to be introduced during Enzo's lifetime was the legendary F40, one of the greatest cars to come out of any factory, Ferrari or not. The successor to that car's successor, the Ferrari Enzo, was named after the auto industry icon when it came out in 2002. With just 400 examples produced, it would be the last V12 flagship Ferrari hypercar to be powered by internal combustion alone.

Enzo is succeeded by his son, Piero—whose mother is notably not Enzo's wife but Enzo's mistress Lina Lardi, a granddaughter, and two great-grandchildren. Piero continues to own a 10 percent stake in the car company founded by his father.