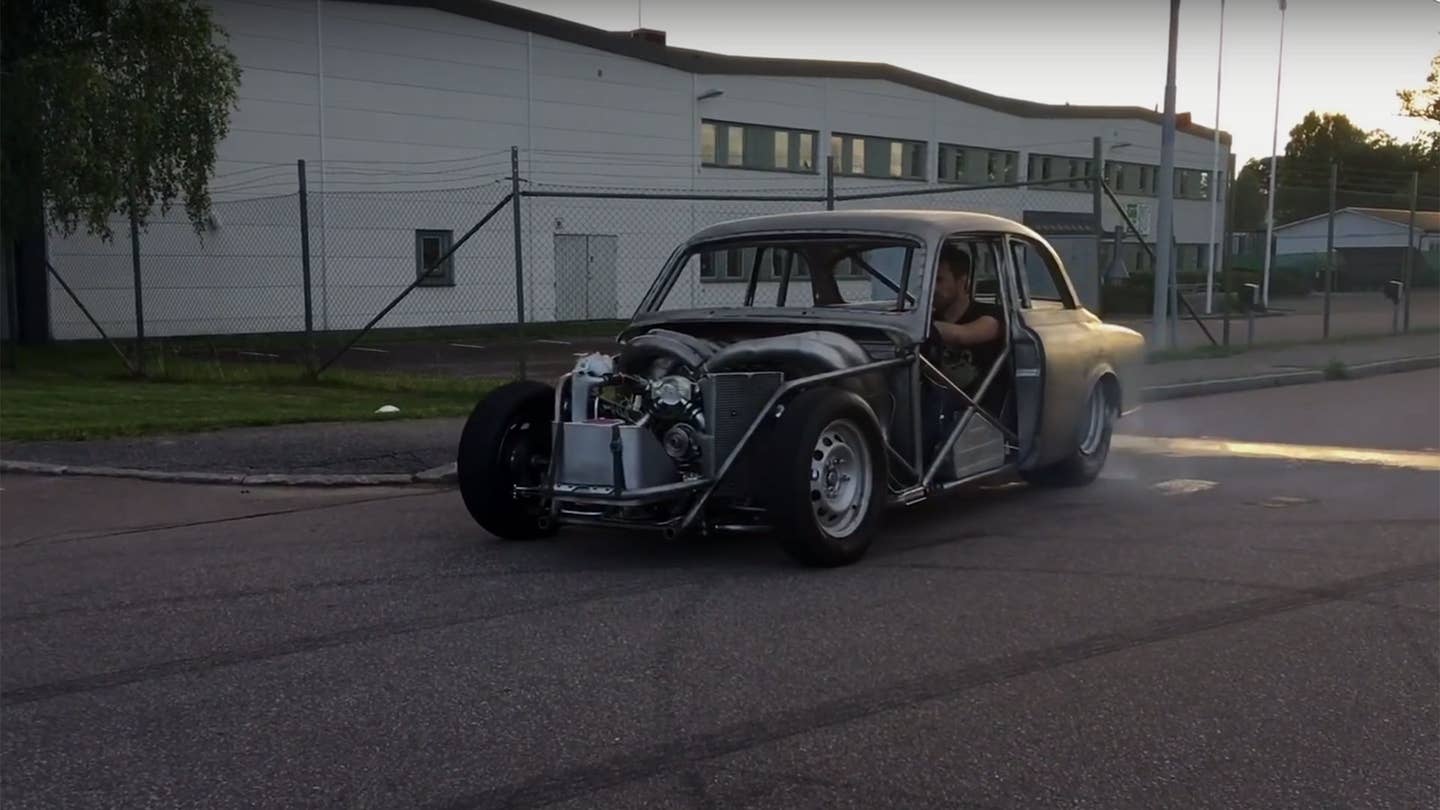 Seth McFarlane made a movie a couple of years ago called “A Million Ways to Die in the West.” It was not very good! The title, however, is useful when summing up the vast number of homemade vehicles in garages throughout the western hemisphere. Take these two: one, a Ferrari Enzo-esque body powered by twin Rolls-Royce jet engines, the other, a drag-ready Volvo Amazon with a two-stroke Evinrude boat-racing motor under where the hood will eventually go. Both, the projects of men whose relationships to bodily integrity and a peaceful old-age seem temporary, at best. Pick your poison below. There's no wrong answer.

First, the Dragarri. Canadian Ryan McQueen started work on the jet-powered Ferrari Enzo-lookalike drag car back in 2004, christening it “Insanity.” Twelve years ago, after seeing a jet-powered drag car race, McQueen raced (probably) home to start scheming his own entry. He sold a then-beloved Corvette and got to work designing his own jet-fueled racer. In an interview with the CBC, McQueen allowed that he began with no experience in welding, fiberglass construction, engineering, metal fabrication or jet engines. Undaunted, he toiled, spending over $69,000 along the way, and is now preparing the completed Insanity—insanity, complete—for competition next summer. By McQueen’s own rough calculations, the 14,000 pounds of thrust provided by the twin Rolls-Royce turbines should get the Fauxrarri up to 400 mph.

Were we to get behind the wheel, we'd expect a certain kind of death in Insanity. Our body, likely atomized at 400 mph, would cause a fine human mist to float down onto unsuspecting Canadians.

Then, there’s Rudezon, a Frankenstein's monster of tube-frame racing chassis, Volvo Amazon body and 2-stroke Evinrude V8 pulled from a racing boat. As you may have guessed, this hot-rodded Volvo is from Sweden. Following two years of testing and tuning, the Rudezon has made its inaugural runs. As one astute YouTube commenter pointed out, it “smokes like a diesel, sounds like a moped.” While that’s true, it also looks ludicrously fast, is deeply menacing and sounds louder than the apocalypse.

A likely death in the Rudezon would begin with carbon-monoxide asphyxiation. Then, lost control of the Amazon, followed by flight through the windshield and a landing—because there is no hood—in the heaving internals of the 4-liter Evinrude V8, organic guts mixing with the Rudezon's steaming steel ones.

So, which would it be?