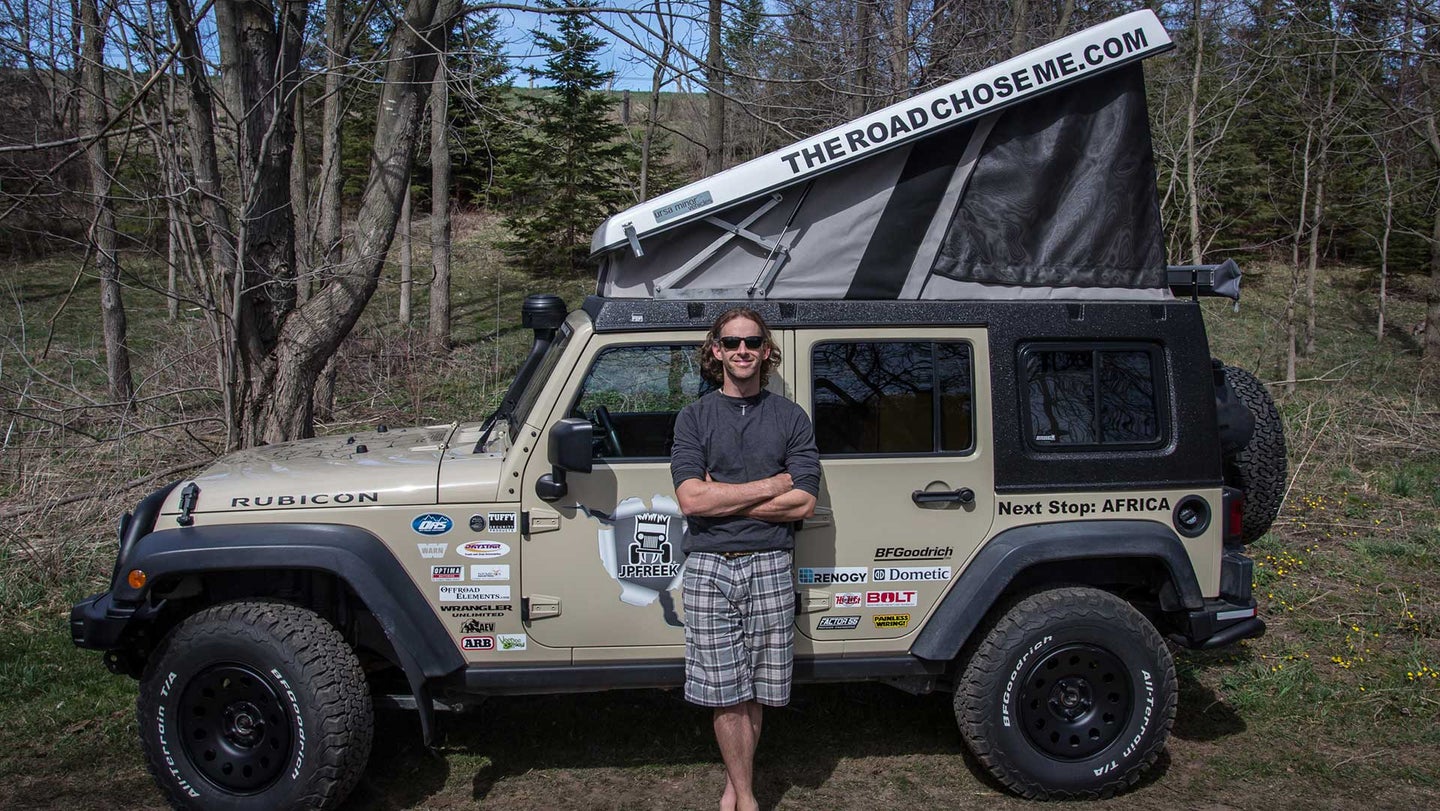 Go to any trail and you will find purpose built overlander builds ready to conquer the weekend. Those builds are intended to traverse a few sketchy spots, but all around you are not in danger and you hop back on a main road and head home. Dan Grec’s Jeep Wrangler build is designed to keep you alive for 80,000 miles through sketchy African terrain.

Before talking about the Dan’s Jeep, it is worth mentioning why he needs it. Dan is currently in the beginning of a 2 year African expedition. As of writing this article, Dan is currently in Gabon. He has driven 14,216 miles in Africa in 409 days and has visited 14 countries.

Dan purchased a used 2011 Jeep Wrangler Unlimited Rubicon equipped with a 3.8L V6 and 6 speed manual transmission. Dan previously drove a two door Jeep Wrangler from Alaska to Argentina amassing 40,000 miles in 22 months. According to the expedition expert, choosing the right Jeep was probably the easiest part of the build, next came the hard part.

arguably to most attention-grabbing part of the build is the custom roof. Dan equipped his Jeep with an Ursa Minor Vehicles J30 popup camper which features a customized open rear area to provide more room. According to Dan, inside living space was the highest priority. In order to maintain a relatively green adventure, Additionally, Dan installed two large solar panels to charge his second battery in the car.

In terms of off road performance, the Jeep’s suspension was upgraded with an American Expedition Vehicle 2.5 lift kit, bumpers, skid plate, tire carrier and high life mount. Most importantly, tires and wheels had to be upgraded. Dan wrapped BFGoodrich KOS All-Terrain tires (34x10.5R17) around some Mopar Steel Winter Wheels. Performance on Dan’s build is rounded out with the enthusiast necessary Snorkel, from AEV.

Being solo in Africa he has to trust only himself in sticky situations which is why a bunch of recovery gear is key. Dan has the overland enthusiast choice Maxtrax mats, as well as a hefty supply of strong ropes to get out of stuck situations and of course the necessary Hi-Lift Jack. Dan’s lighting was also important all of the lighting on his rig is by way of Rigid Industries.

From the outside, Dan’s Jeep looks like it can stand up against any adventure, but the inside is where this build is set above the rest. Dan’s Jeep is a mini hotel room. It has a fridge, kitchen area, awning, shower, and even has a fan for sleeping.

There are more powerful builds, there are builds that can crawl up anything, but I have yet to find a more survivable build than Dan Grec’s. I recommend you follow Dan’s journey on his site http://theroadchoseme.com/ as well as his social media links Twitter @dangrec and Instagram @theroadchoseme