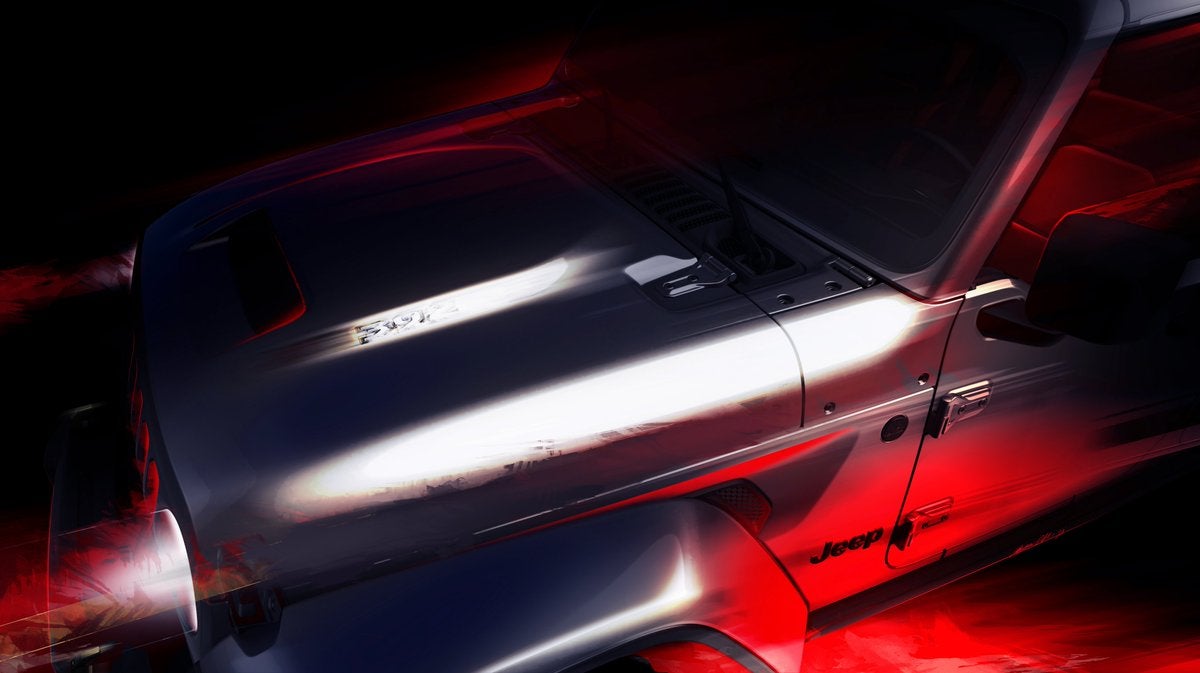 Saturday morning, Jeep’s Twitter account posted a tantalizing view of what looks to be a Wrangler hood with a badge reading “392.” While it’s all but impossible to say which model was in the shadowy teaser—there's a chance it could be a Gladiator pickup—at least one thing is clear: the company is about to drop its famed Hemi V8 in yet another model. What’s more, it looks like it’ll be a real-deal off-roader.

Absolutely zero written info was included with the photo, but ever since Jeep successfully engineered the Grand Cherokee into doing four-wheel burnouts with the SRT-8 and Trackhawk, Wrangler owners have been asking for a Hemi badge. Tuning companies like Hennessey and Rubitrux have long been answering the calls for Hemi-powered offerings, but there’s nothing like getting it straight from the factory.

Now, of course, our minds are left to wonder. If not a Wrangler, might this be a silent preview of the rumored Raptor-challenger, the Gladiator Hercules? After the 392 Hemi, will there ever be a Hellcat? Is this Jeep’s tongue in cheek way of stealing some thunder from the hurricane of 2021 Ford Bronco news? Regardless, Jeep has been successful in nabbing our attention.

Both the Bronco and, supposedly, whatever Jeep this is will be hitting showrooms before long. We know Ford has a release date of 2021 for its pride and joy SUV revival, and it’ll be revealed on Monday on prime time television. We wouldn’t be surprised if Jeep held off a bit to see exactly how the public reacts to the 2021 Bronco, but if this off-roader boasts the same 485 horsepower as its Dodge Scat Pack stablemates, it could be in another league.

Expect to see YouTube channels filled with comparison tests of the new kid Bronco going up against the latest Jeep Wrangler. If nothing else, what this Jeep 392 Hemi teaser photo does is stir the imagination. Can you imagine a Jeep Wrangler SRT with a manual transmission, 35-inch tires and a factory lift-kit? 2021 might be the year of the off-road SUV.