At 35 and 40, respectively, these two continue with more records and, of course, championships. 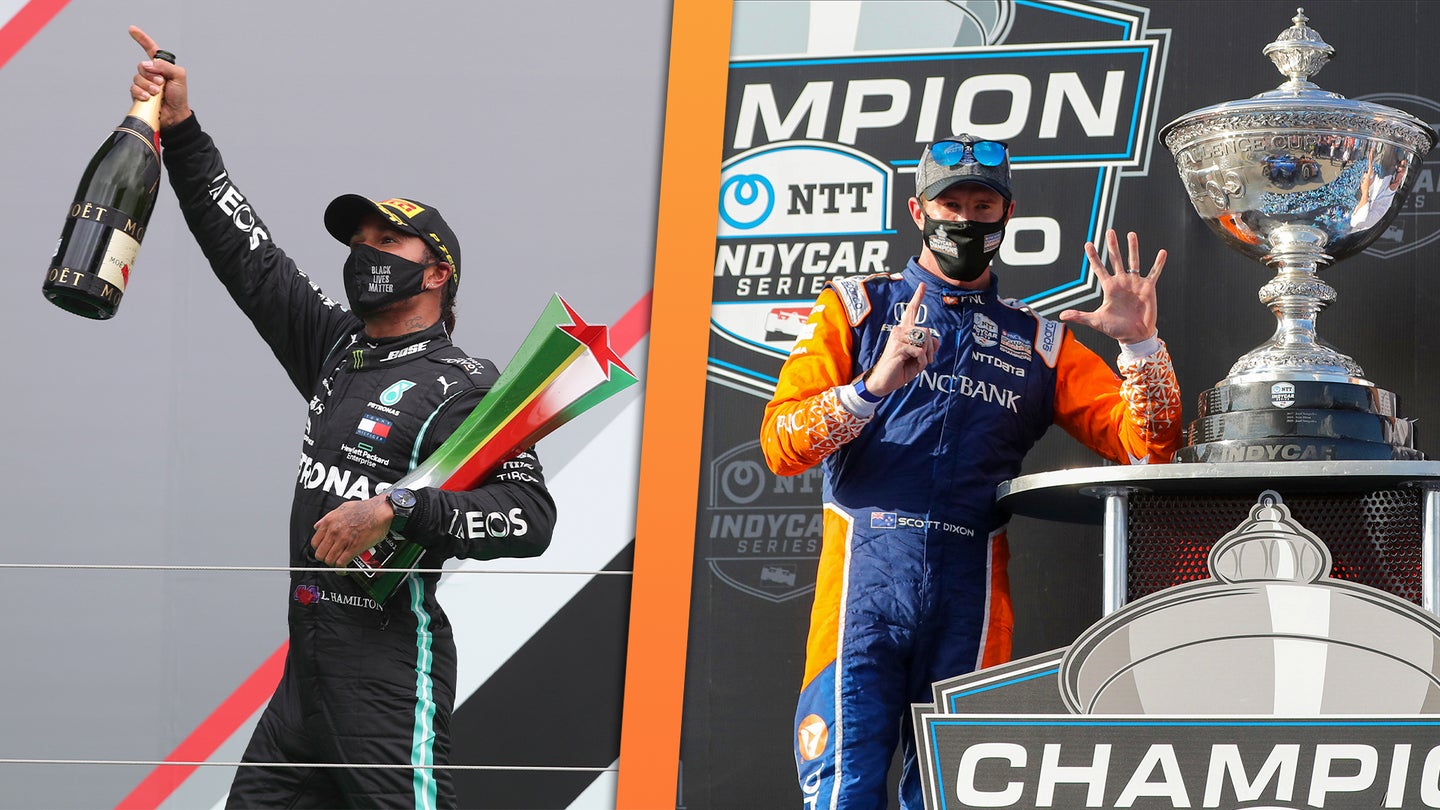 While 2020 has brought flares of surprise competitiveness from Formula 1's mid-field, Lewis Hamilton still touts a 77-point championship lead after another win last weekend in Portugal. The runner-up is, of course, his Mercedes-AMG teammate Valterri Bottas. Meanwhile, in the States, Team Penske and Josef Newgarden won IndyCar's season finale at St. Petersburg, though it was Scott Dixon who nabbed his sixth series title. Neither of these race results or championship standings is surprising, but they both carry enough significance to make last weekend one of the year's biggest yet—here's why.

In nabbing the checkered flag at Portimao, Hamilton notched his 92nd career F1 victory, making him the sport's winningest driver of all time. He had already passed the greats of Senna and Prost, as well as his frequent rival Sebastian Vettel, but he was tied with Michael Schumacher before race's end on Sunday. Keep in mind that the driver nearest to Hamilton and Schumacher is in fact Vettel, who has 53 GP victories to his name. That's undeniably impressive but a long way off of 91 and 92, respectively.

"Today was tough," Hamilton explained in a post-race interview. "They said it was going to rain straight after the race but we got some spitting just after the start and I got a good start. Going into Turn 7, I had a huge oversteer moment and we didn’t know what was next so I really backed off massively and arguably I probably should have tried to defend from Valtteri. But I was like, 'I’ll come back later on', and fortunately that’s what I was able to do."

“It’s going to take some time for [the record] to fully sink in, but I was still pushing flat-out coming across the line. I’m still very much in race mode mentally… I can’t find the words at the moment," concluded the six-time F1 champion.

Hamilton has since taken to social media, commending Schumacher for the extremely high benchmark he set throughout his career.

As has been the case with every racing series, IndyCar was...unusual in 2020. For instance, the season kicked off at Texas Motor Speedway in June and the Indianapolis 500 was moved from Memorial Day Weekend to late August. In turn, drivers had to adapt to the strange schedule which hopped between ovals, street circuits and road courses even more frequently than before. Luckily for Scott Dixon, it doesn't matter where he races because he can win on all three track types.

Dixon started hot with three consecutive wins at Texas, the Indianapolis road course and Road America. He would later claim a fourth win at Gateway, which complemented his typical string of consistency. Even when he wasn't winning, he was almost always well into the points, and he did so without the help of a single pole position in 2020.

The New Zealander drove to P3 in Sunday's season finale at St. Petersburg, closing the year 16 points ahead of Newgarden despite the Team Penske driver winning the race.

Dixon is now just one championship away from tying the great A.J. Foyt for the all-time lead, and that certainly seems within reach for the veteran driver. It's been 17 years since his first title in 2003, so longevity clearly isn't an issue.

Scott Dixon: 40 Is Nothing But a Number for IndyCar’s Fittest and Hungriest Driver

Happy birthday to IndyCar’s own Iceman.