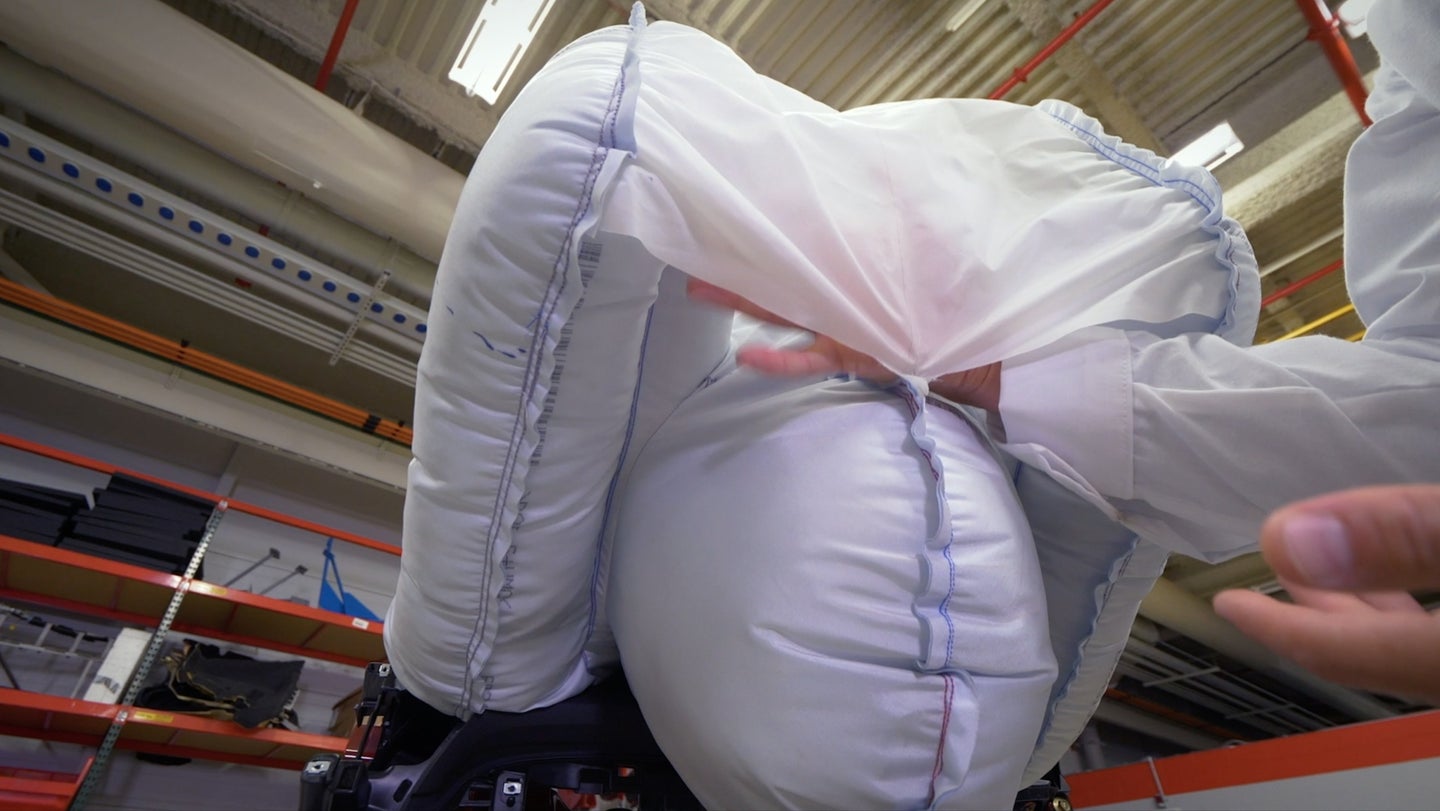 The 2021 Acura TLX comes with one great new feature you'll never want to use: the first-ever passenger-side airbag designed to reduce the risk of serious brain injury in angled front-end collisions.

The passenger side of a vehicle is an especially tricky place for airbag designers. Occupants sit further away from the airbag itself, and thus, have more room to get tossed around before they hit an airbag. Oblique-angle front impacts—the kind where only part of the front is hit—are some of the worst, as the body gets tossed forwards as well as sideways. The lateral forces involved in such crashes can cause the passenger's head to twist violently at high velocity, or worse—slide off of a conventional front airbag.

The new TLX airbag uses one conventional inflator as you'd find in any regular single-chamber modern airbag, but it's the multi-chambered shape of the bag itself which makes it more effective at reducing the risk of brain injury. This new airbag airs up from a centrally-located inflator, but pass-through vents allow gas from that inflator to move quickly from the center cushion out to extend the taller cushions.

"We want to really control the head rotation to minimize those brain injuries," explained Honda R&D Americas' crashworthiness technical leader Eric Heitkamp. "The three chambers are intended to really cradle the occupant's head to minimize the amount of rotation [of] your spine," he continued.

More importantly, this sail panel is the first component of the airbag that the passenger's body hits in a frontal impact. That slows the passenger's upper body down before it even hits the bottom inflated cushion, thus softening the impact.

"The benefit that we've seen from [hitting the sail panel first] as it relates to the brain injury metric is that...we want a soft, gentle engagement into that cushion to help control that initial rotation of the occupant's head," Heitkamp explained. "Then once you're kind of fully engulfed into all three chambers, then we can really use the stiffness of the airbag to successfully manage all the crash energy and minimize injuries both to the head and neck and other body regions."

Even if your head doesn't hit anything hard inside your car, the rapid movement and deceleration of your upper body are very, very bad. "It's essentially the axons in your brain shearing," Heitkamp said. "What happens when the axons in your brain shear is that you can have a concussion, loss of speech, loss of mobility, and in the worst case, if it's very, very severe, it can be fatal." So, the more gradually your upper body can come to a stop, the better.

Honda R&D Americas worked with its airbag supplier Autoliv on this new airbag design with the intent of sharing this design and research with other auto companies. Honda and Autoliv's research built upon a brain injury study done by the United States Department of Transportation that ultimately led to the creation of the BrIC (which stands for "Brain Injury Criteria") methodology for measuring brain injuries in vehicle collisions. That study proved that airbags could do a better job at preventing brain injuries, and the BrIC criteria as well as an advanced crash test dummy called THOR helped researchers understand exactly what was happening when designing this new system.

Eventually, the TLX's new airbag design will be rolled out to other Honda and Acura models, but a company spokesman would not speak as to which vehicle would get it next and when.

Other components on the car work with the new airbags to up the 2021 TLX's safety game. Both front seats have knee airbags now to keep passengers from moving too far forward in a front-end crash, bringing the total number of airbags in the new TLX up to eight.

Furthermore, Acura touts its latest iteration of its Advanced Compatibility Engineering (or ACE, for short) body structure, wherein the connected structural components of the car are designed to absorb and distribute crash forces away from the passenger compartment. Even the high-strength steel central transmission tunnel ties into the lower front bulkhead to disperse collision energy through the tunnel instead of into the passenger cabin.

With all these safety systems built in, Acura expects its 2021 TLX to pass its crash tests with flying colors. Acura is aiming for the National Highway Traffic Safety Administration's highest five-star Overall Vehicle Score and the Insurance Institute for Highway Safety named it a Top Safety Pick+.

Correction: Thursday, Jun 18, 2020, 3:16 p.m. ET: An earlier version of this story stated that the 2021 Acura TLX's crash tests had already been done. However, we recently learned from Acura that this was a misunderstanding, so we've revised the story above.