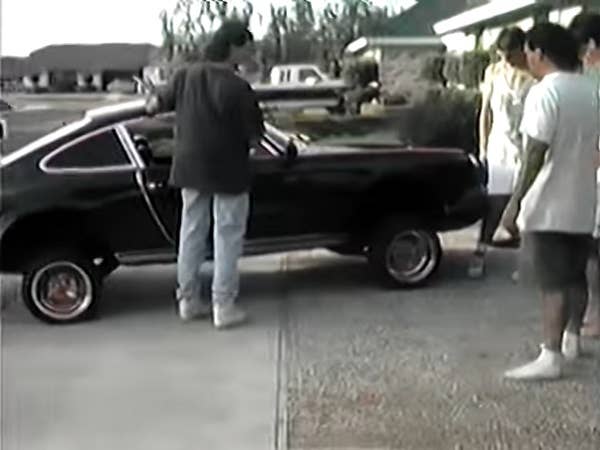 Back in the 1980s, a vintage 911 was just an old car. It wasn't particularly valuable, and it wasn't particularly desirable. In those days, it was far more popular to weld some Carrera fender flares and impact bumpers to a longhood 911 than it was to restore one. This group of entrepreneuring young individuals fitted this old German biddy with full "Old School Hydros & Spokes" style. This video has been going around lately as a 15 second clip, and while that gives you the general idea, we thought it would we worth it to unearth the full two minute short. The crew pictured here was proud of their creation, and filmed it with what we can only assume is an equally old school over-the-shoulder VHS camera.

This video is fun, because you watch the guy at the controls hitting switches, picking it up and dropping it again. This Porsche sits quite low on its gold spokes (possibly 12" wheels, it's difficult to tell), and can jump up to an easy foot and a half off the pavement. The car appears to move up and down by the axle, so I'm not sure this Porsche could move in three-wheel motion position, but it remains old school cool. These days, we lament the gaudy modifications, the whale tail, the late rear bumper on an early car, and the chrome trim everywhere, but back then it was probably the star of every lowrider show it attended. It was new and different, as far as I know, a one-of-a-kind.

For those curious, this appears to have started life as a long wheelbase long hood car, from 1969 to 1971. It doesn't have 1972's external oil-fill door on the passenger rear quarter, or 1973's black marker lens surrounds, so we think we can safely narrow it down to those three years. The video is quite grainy, obviously, and they could have committed further extensive modifications to the body to throw us off, but we're fairly confident.