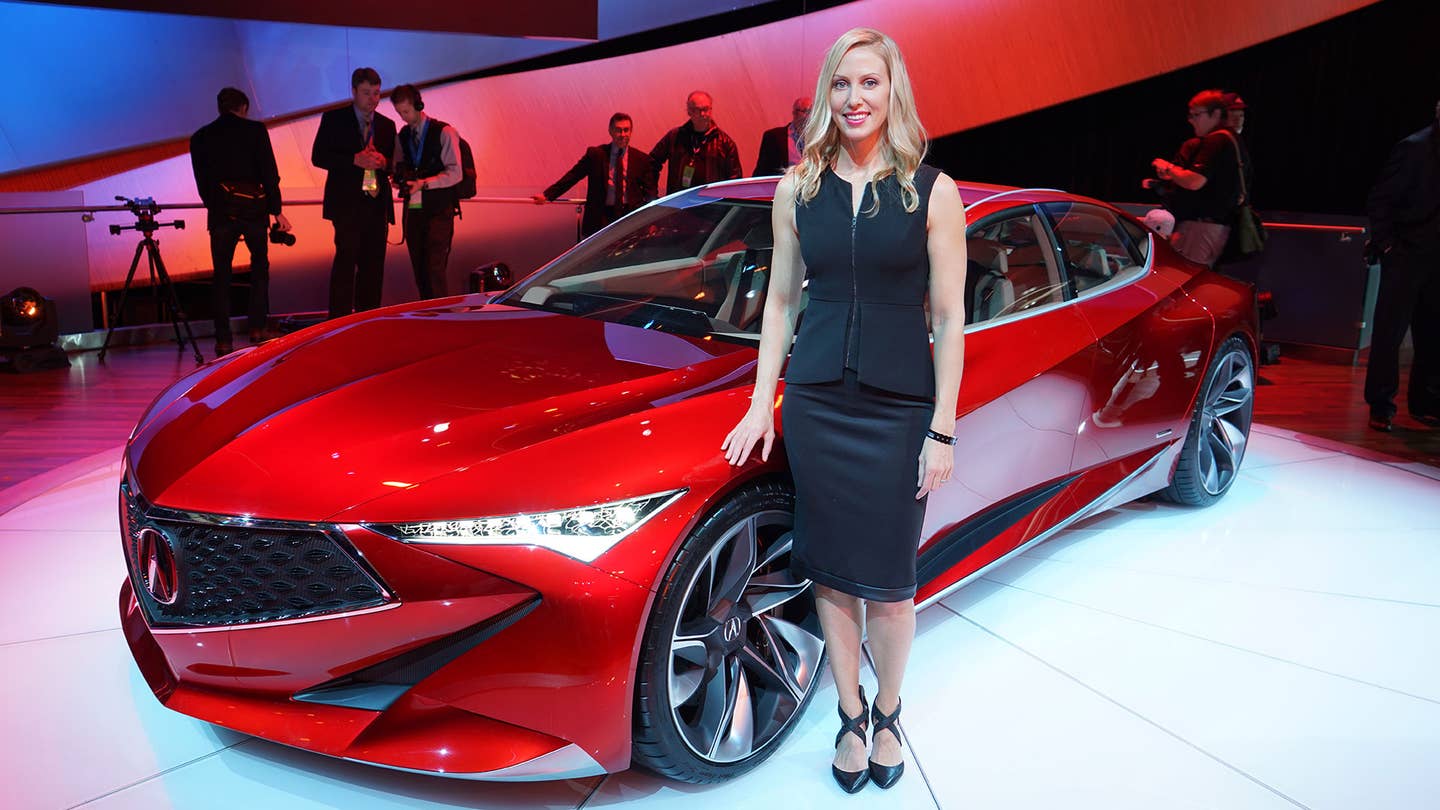 Michelle Christensen is changing the face of Acura. Not only has she shaken up the brand as a highly creative individual and one of the few female lead designers in the industry, she has introduced a new physical visage for Honda’s sporty near-luxury marque. “This is our new grille,” she says pointing at the Precision Concept Sedan’s gaping, black, grimalkin snarl, which is broader and more angular than the gleaming, striated, Gillette Mach 3 prow that used to mar even the brand’s most restrained designs.

Squinting on either side of this giant maw is a row of narrow, white-diamond LED lamps, hidden behind a fractalized screen that resembles spun sugar. “Over the past several years most headlights and taillights have been very structured, and perfect. We wanted a little more chaotic feeling here,” Christensen says. All of this broadness and horizontal chaos accentuates the car’s width. “If you compare it to our RLX, it’s almost 10 inches wider,” she explains. That’s a lot.

The car reads immediately as complex—to some eyes, too much so. But with time, its details meld and mold, and it becomes alluring. In talking to Michelle about her points of inspiration—which just so happen to be some of her favorite non-automotive objects—I found the car’s intricacy unfolding, and folding in on itself like a Jacob’s Ladder, revealing surprise and delight like a wonderful piece of architecture. Or, as it turns out, a piece of architectural footwear.

Tell us about a relatively affordable object that you really love.

Our key team, our people for the Precision Concept, went to Milan and Rome to get inspired. One of my favorite shoe brands is United Nude. And while we were in Italy, we came across an exhibition they did, a collaboration with five architects to make a shoe out of SLA—3D-printed material. And there was one from Zaha Hadid, who is amazing. And her shoe just captivated us. We probably stood at it for an hour just oohing and ahhing.

It was this beautiful pump, but it has all these little spikes coming off of it so it looked like it was just floating and oozing out of the ground. And then the most interesting part was the insole, which was a gloss material that bled out and became the heel. So that actually inspired us for our whole blend of inside outside on this car, which you can see really easily with the open side sill here transitioning to the floating seat.

How did you actually come across that particular object?

I follow a lot of United Nude goings-on, I guess. I love that company. They’re really progressive and I like that their shoes are kind of architectural. So we knew that we were going to Milan for Design Week, and I happened to see a little flier about this little teeny show that they were having featuring these five architects’ shoes. It was the first thing we did when we got there, and we couldn’t stop thinking about it the whole time we were there.

Would you wear it if it were available?

If you were purchasing like a nice shoe from that company, about how much would it run?

They’re not in the Prada range. For a designer shoe, they’re actually fairly affordable. They go from maybe around $100 to $600, somewhere in there. They have some concept shoes that are much more exclusive but yeah, they’re basically pretty affordable.

Tell us about a crazy high-end object that you love.

It’s a museum. On the same inspiration trip, the last thing we did was to go to the MAXXI Museum in Rome, which was also a Zaha Hadid building. What was cool about that building is—I guess it’s maybe similar to the shoe—there’s all these sculptural elements outside, but when you walk inside, you see them coming in. You almost don’t realize what’s inside and what’s outside. Just the structure alone of that building was really impressive and you don’t see that a lot in architecture. So, yeah, that building was really inspiring.

And why are you attracted to this melding of inside-outside in automotive design—particularly at a moment when manufacturers put so much emphasis on closing off and cocooning passengers in their little infotainment bubbles?

Using inspiration from NSX, we’re trying to make things that have a lightweight and sporty feel—like the floating A-pillars. And features where you can stick your hand through, like the taillights or the floating C-pillar.

I think maybe it’s something the market needs. It has always seemed to be very segmented between exterior and interior: you do a design and then you plop a cabin on it. For us, we definitely wanted it to be more playful and we wanted the customer experience to be more holistic, not just like ‘oh that’s a hot car,’ and then I sit in it. We wanted these alluring details to draw them in and create new things that they can constantly find. You know even after they’ve owned it for a while. Surprises. Easter eggs.