Then again, Musk seems to have long been fascinated with aquatic automobiles. 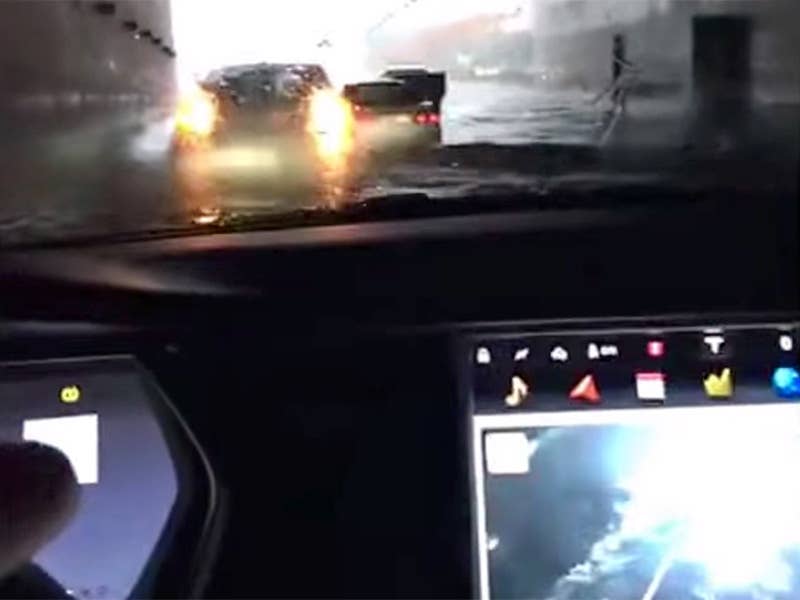 Elon Musk might be one of the few CEOs in the world with an exciting Twitter account. When he’s not playing the role of all-knowing, thought-provoking billionaire, he’s letting the world in on the inner workings of Tesla’s operations—hell for Tesla's management, perhaps, but heaven for automotive journalists. His latest pronouncement comes following this footage that surfaced (no pun intended) of a Kazakhstani Model S driver “swimming” his electric car through a flooded underpass, while gas-powered cars struggle and swamp.

Musk tweeted a response, his levels of seriousness as opaque as ever:

It’s not totally clear if the Model S in the video is truly acting as a boat. Is it floating completely above the road surface, propelling itself with “wheel rotation”? Or is the incredibly heavy Model S maintaining just enough touch-and-go contact with the road to enable forward movement? Regardless, it makes better progress than the other vehicles stranded in the deluge—a marketing victory, as well as a personal one for the driver.

Despite its ease in the water, and Musk’s note that all batteries and electrical components are sealed against liquid, cars—even electric ones—are emphatically not water vehicles. And while its founder may seem excited by the quasi-amphibious capabilities of the Model S, Tesla's warranty underscores the fact that its cars are not meant to be submerged.

Followers of Elon Musk, Twitter-based and otherwise, will remember that he purchased the white Lotus Esprit used to film The Spy Who Loved Me with the express intention of turning the prop into a true amphibian: Lotus on land, fish in the water. Per Musk’s tweet, he’s still planning to execute a “sports sub car that can drive on roads,” but won’t be bringing a car of that type to market. The little Lotus will remain a side project and Musk’s personal car. So for now, amphibious Teslas are just a dream—unless you’re a wealthy Kazakhstani motorist, in which case they’re a failed warranty claim.

But that’s why it’s so cheap!