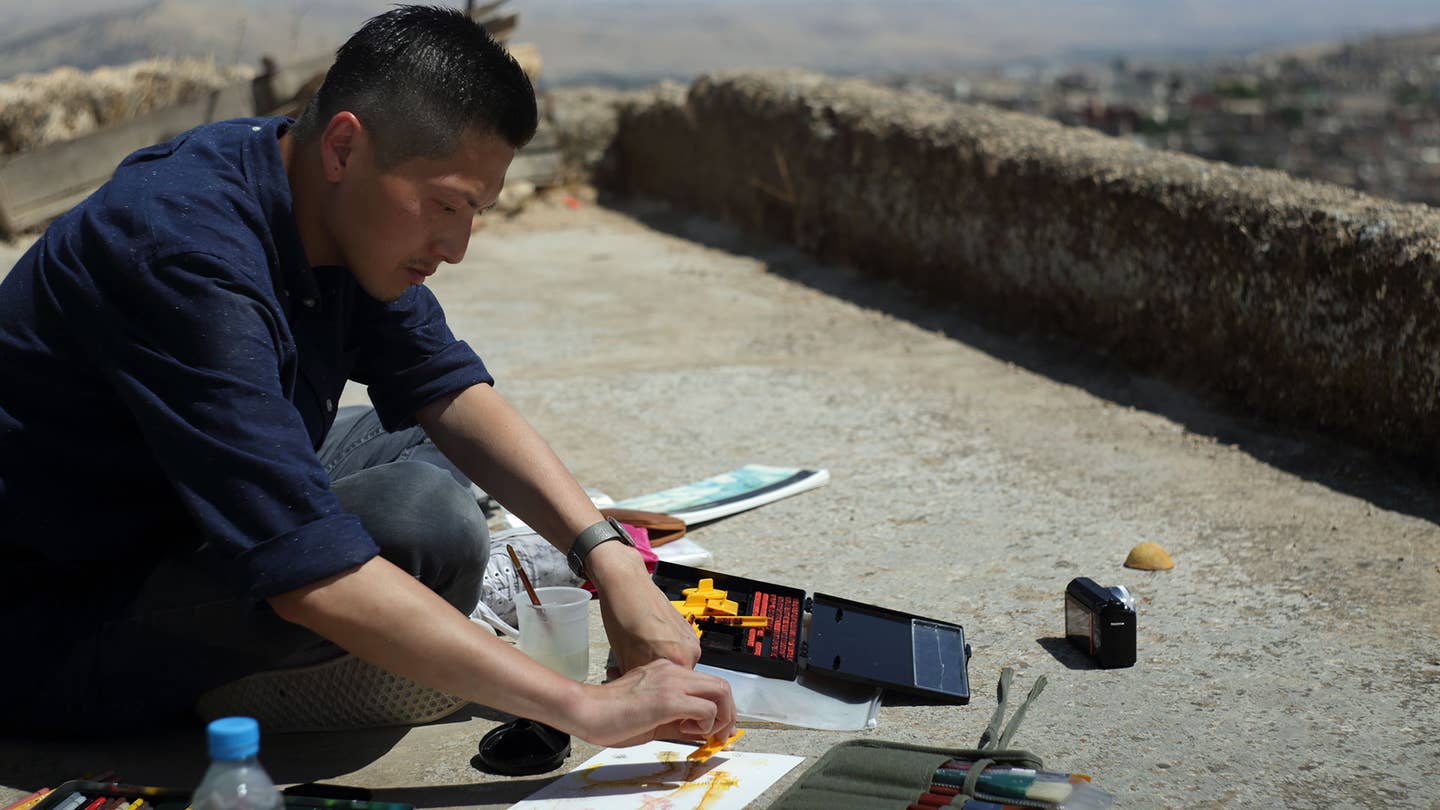 Samson Young has been on a long, strange trip. The 36 year-old Hong Kong-based artist and composer was the first recipient of the BMW Art Journey award, a grant that funds travel and research for artists.

“Everybody, in their heads, has a dream journey. But Young took one because he had an indelible artistic vision,” says Thomas Girst, BMW’s equally indelible head of cultural engagement, in introducing us to Young at Soho House Miami during the Art Basel Miami Beach cross-cultural hoedown last week.

Young’s trip took him to five continents and 11 countries. In search of bells.

He does not have tinnitus, or a Hemingway or Donne complex. He is simply obsessed with the literal and figurative intersection between percussion and repercussion, particularly as it relates to two objects: bells and cannons. To this end, he visited sites around the world that held particular relevance to his twin obsessions.

He went to the “Bell Graveyard” near Hamburg, Germany, where the Nazis collected bells confiscated from the churches of conquered lands, to be used as raw materials in German munitions factories.

He visited a bell in a mosque in Fes, Morocco, that had been taken from a Spanish church in the 14th Century, and then silenced—its tongue ringer was removed—and turned into a decorative object as a means of demonstrating Islam’s triumph over Christianity.

He visited the Great Peacock Clock, a musical timepiece at the Hermitage in St. Petersburg, Russia. The clock was General Potemkin’s seductive gift to Catherine the Great, then ruler of Russia (in part due to his help with a coup), at the height of their passionate and politically charged affair. It is tremendous and gold and housed in a giant vitrine.

At each stop, Young rang and made careful digital recordings of these bells. “Pre-industrialization,” he says, “there were only two objects that could produce sound louder than natural disasters: explosions and bells.” One doesn’t just hear these sounds; one feels them deep in the marrow.

One also experiences them psychologically, even when they’re silent. “I’m interested in objects that, even without making the sound, evoke the imagination of hearing,” Young says. “I mean, a bell is absolutely one such thing, I think musical notation has that quality. And language has that quality. I mean when you write ‘B-O-O-M’ you hear a certain sound.”

Sponsored as he was by BMW, Young did a fair amount of driving during his journey. “There were places where I really needed to drive to get to, so it was a natural part,” he explains. But the distances traveled, and the amount of time he had to complete them—just a few months—mainly required flying.

Being frequent voyagers as well on air, land and sea, The Drive wonders aloud about the larger question of traveling for exploration’s sake. There is always this idea of, Was it a good trip, was it a bad trip? We ask Young if a journey like his could ever be a failure.

“I don’t know how I would measure success but I think for this trip, I was incredibly lucky,” he says. “There were no hiccups, except for one. I was planning to record the Korean Peace Bell in LA, which they’re supposed to ring every year on Institution Day. But this year, for some strange reason, they didn’t, so that part of the journey I wasn’t able to get that recording. But what I did get was a bunch of Korean tourists who were as disappointed as me, who came to see the bell and found that they were not going to ring the bell this year. So therefore, they just vocalized it on the spot. And I got it on recording, and I thought, that’s even better than getting the real bell.”