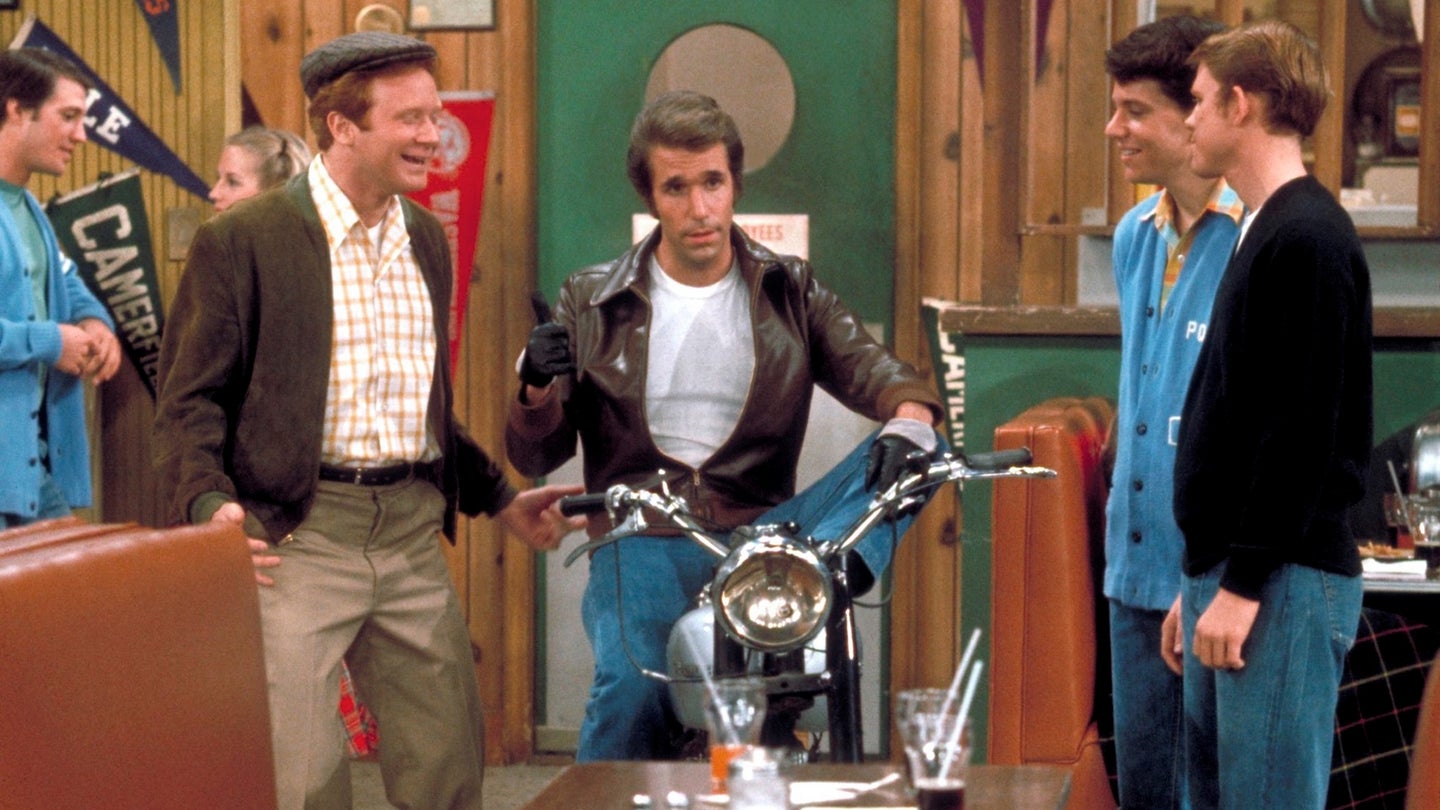 Among the high-dollar Hollywood memorabilia sold at Julien’s Auctions Hollywood Legends auction at Planet Hollywood in Los Angeles last weekend was Han Solo’s blaster from Return of the Jedi, the Evil Superman suit from Superman III, and Fonzie’s 1949 Triumph TR5 Trophy from the hit sitcom Happy Days. The bike was expected to sell for anywhere from $100,000-$200,000 and its hammer price was $179,200. Ayyyy, indeed.

Before the Triumph Trophy turned into the sport touring bike it is now, it was a standard bike—not too different from the Bonneville, but with more of an all-terrain focus. Made from 1949 to 1958, the TR5 Trophy was powered by a 498cc OHV four-stroke parallel twin.

Arthur Herbert Fonzarelli may have been the epitome of Fifties cool, but actor Henry Winkler famous didn't know how to ride a motorcycle and was mainly filmed sitting on or posing with the bikes seen on Happy Days. The model sold last weekend is one of three bikes used by The Fonz and was apparently Winkler’s favorite because it was the lightest, according to Motorcycle News.

Screen time aside, this is no ordinary Triumph Trophy. It was customized by Bud Ekins, whose name you might recognize as Steve McQueen’s friend and frequent stunt double. Ekins is also the guy who made the famous jump on a TR6 Trophy in The Great Escape while trying to flee from a Nazi prisoner of war camp. Ekins gave Fonzie’s Triumph a custom silver paint job, a new handlebar, and removed the front fender.

Other motorcycles at the Hollywood Legends auction included a 1969 Harley-Davidson FLH Electra-Glide owned by Marlon Brando which isn’t listed on the auctions results page (perhaps because it didn’t meet the reserve?) and Arnold Schwarzenegger's 1987 Harley-Davidson FLSTC Heritage Softail Classic that went for $38,400.

Nissan and Lucasfilm unveiled their collaboration on a custom Nissan Rogue Millennium Falcon for Solo: A Star Wars Story Thursday.