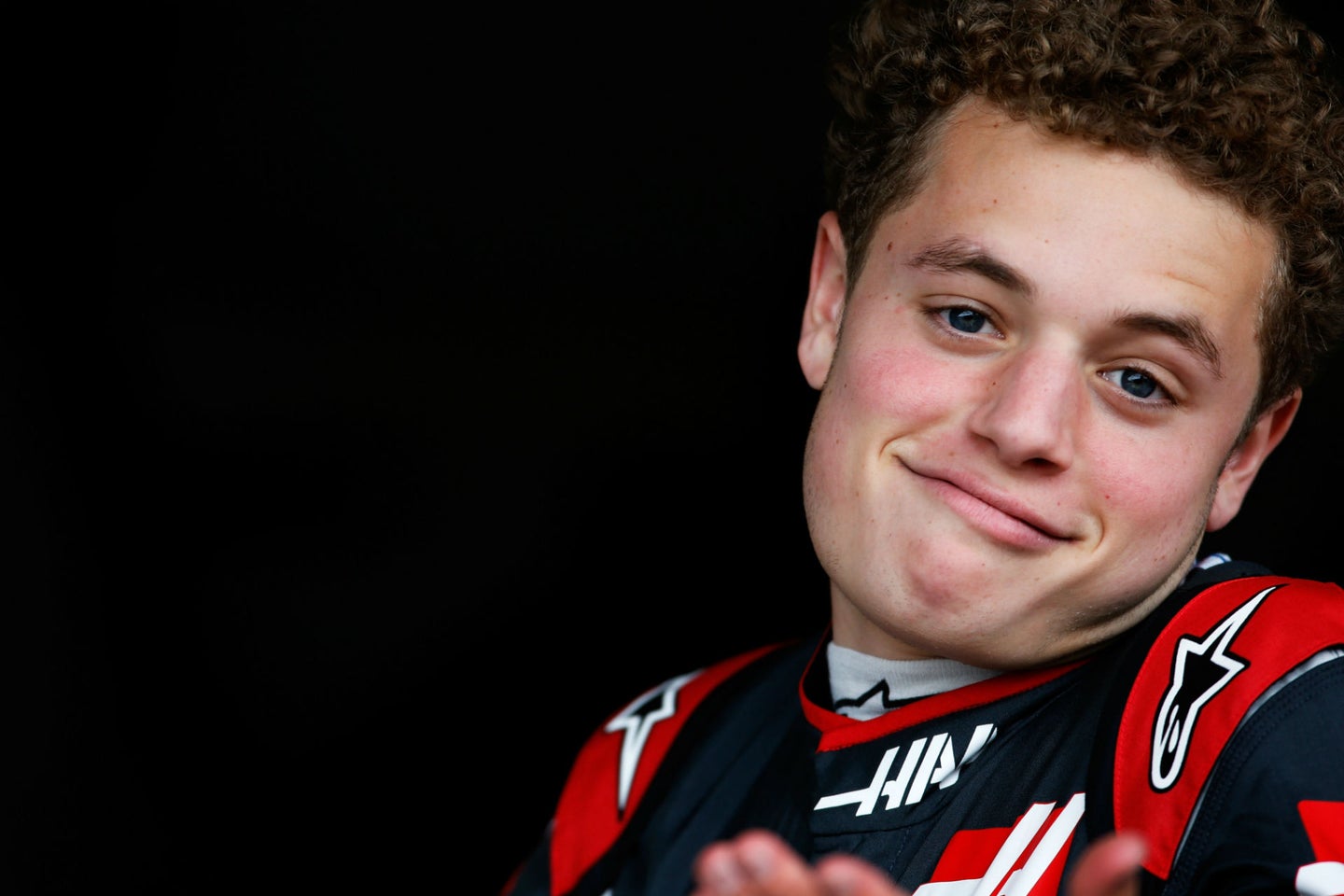 Santino Ferrucci, the 20-year-old Formula 2 driver known for his attitude and often unmanageable behavior, pillaged his already-shoddy reputation by purposely crashing into his teammate at last weekend's Silverstone-hosted F2 race. Not only did he ram into the back of Arjun Maini’s car after the checkered flag, he also refused to appear before the race stewards, despite being called upon to do so immediately following the incident.

Then, for good measure, he was subsequently reprimanded by series officials for piloting his racecar with one hand on the wheel and the other—gloveless—holding his cell phone.

According to the official Formula 2 website, the young American racer was found to be in contempt of violating the FIA's sporting regulations, further earning him a €60,000 ($70,500) fine for the deliberate on-track action involving Maini. He was also taxed an additional €6,000 ($7,047.34) as he “violated both the technical and sporting regulations for incorrect driver safety equipment and the prohibition of wireless transmission devices within the car.”

As part of his punishment for the aforementioned behavior, Ferrucci was banned from the next two weekends of racing, totaling four points-paying events.

The Haas F1 junior was addressed by his current team, Trident Racing, on Twitter.

Furthermore, Trident is consulting its lawyers to better handle the situation.

Ferrucci's aforementioned wealthy dad has a serious case of stage-dad-itis, and has created a LaVar Ball dynamic that has disappointingly leaked into the feeder motorsport series.

Maini can be heard after the collision via team radio saying, “There’s something wrong with my teammate's brain, he needs to be banned." Sky Sports F1 tweeted the quote along with the onboard footage of Maini being shunted, to which Ferrucci replied: "Says the one crying on the radio. I just did my drugs test so I’m all clear,” adding a smiley face emoji at the end. “Maybe if they showed what you did to me during the race more people would understand.”

Haas F1 Team Principal Guenther Steiner caught wind of Ferrucci's blunder at the track, telling media: "I’m aware of the incident, I’ve seen it once on TV when they showed the race. I didn’t really realize, I didn’t hear the audio, but I was made aware that there are some problems.

"I said I’m not gonna deal with them today, because we have a race to go to.

"I’m gonna deal with them in the week so I will get more information. I’m aware something happened but at the moment I don’t have enough information to comment on it."

Another annoying thing: Ferrucci requested permission last weekend from the FIA to run a livery supporting Donald Trump's 2016 presidential campaign, much to the chagrin of social media. The message was to read “Trump—Make America Great Again," but was denied, as "competitors taking part in international competitions are not allowed to affix to their automobiles advertising that is political in nature,” per Article 10.6.2(a) of the International Sporting Code.

He's young and talented and arrogant. We get it. And he's got a shitty attitude. And while F2 bigwigs decided to slap Ferrucci for his behavior, he did the most damage to himself by brushing off his antics rather than manning up and owning them.

When reached for comment about Ferrucci's future within the organization, Haas F1 told The Drive that it "is still in the process of gathering all of the pertinent information regarding Santino Ferrucci and his actions during the Formula 2 event this past weekend at Silverstone."