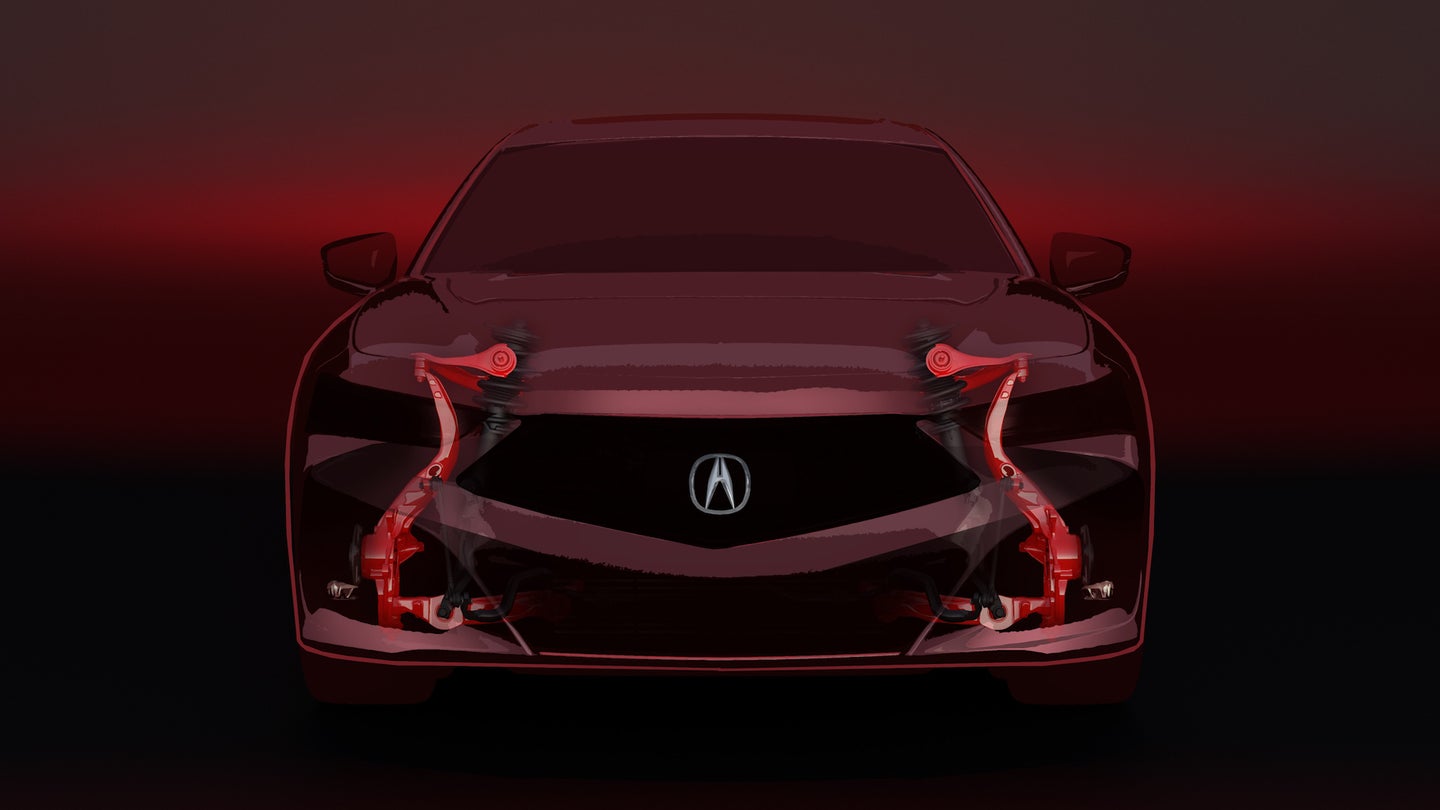 Last week, Acura teased us with news that the 2021 Acura TLX Type S will get a new, more powerful engine, but decided to drop one more tantalizing piece of info before fully revealing the car on May 28. In a release Tuesday morning, Acura confirmed that the 2021 TLX will ride on a new platform that relies on a double-wishbone front suspension system. That should bring back some of the unique handling characteristics that made the company's earlier cars so much fun to drive.

Acura says the architecture is designed for Type S levels of performance and claims that it will make the 2021 TLX the “quickest, best-handling, and most well-appointed” sport sedan the company has ever made. Acura’s earlier confirmation of a 3.0-liter turbo V6 for the hottest versions of the new TLX adds credence to that claim.

Double wishbone systems enjoyed a heyday of sorts in Acura vehicles from the mid-1980s up until just a few years ago. The 1986-1995 Legend, 1990-2001 Integra and 1996-2014 TL all came with the enthusiast-friendly equipment, while the new NSX still does. Acura says the TLX's suspension system and platform are exclusive to the brand, so we won't see it bleeding over into Honda's cars anytime soon.

Though it’s a bit heavier than a MacPherson system, the performance benefits outweigh the added pounds. Cars with the suspension use two wishbone-shaped control arms and handle better than MacPherson systems because of how the suspension geometry reacts during hard cornering. As more cornering pressure is introduced, the suspension allows for more negative camber. At speed, this helps the tires maintain a larger contact area on the road as the vehicle's body leans. More rubber on the road, in turn, results in more traction.

That design also allows for better handling without completely killing the car's ride quality. MacPherson strut suspension systems can be upgraded to achieve some of the same performance, but have to be very stiff to do so, which often makes the car very uncomfortable on rough roads.

Acura will debut the 2021 TLX on Thursday, May 28 at 1 p.m. EST. As we're all still trying to maintain our distance from each other, the reveal will be completely virtual and take place through a short film that can be viewed here on the day of the reveal.

“They still make that?”, you might be asking. Not for much longer.