GM and Honda Will Build Electric Vehicles Together

And it sure sounds like they'll be getting a version of Cadillac's Super Cruise. 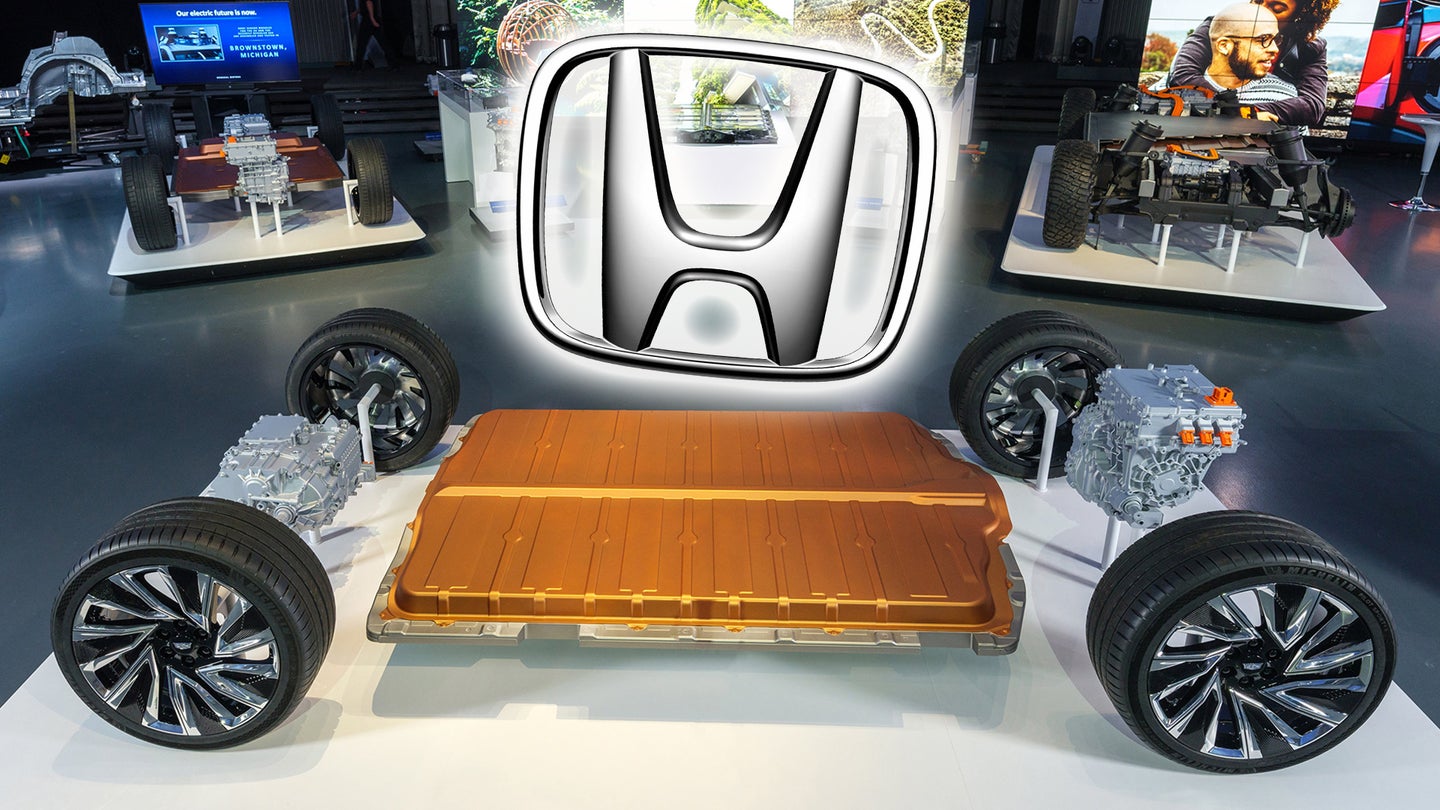 After a decades-long flirtation, Honda and General Motors are taking their relationship to the next level by co-developing two new electric vehicles for the Japanese automaker on GM's freshly-revealed EV platform and Ultima battery technology, according to twin announcements from both companies on Thursday.

Among the dizzying array of promises made at GM's EV Day in early March was that the skateboard-style platform could be adapted to build a whole range of vehicles across its four core brands, everything from pickups to crossovers to performance cars like a possible electric Camaro. Now it appears the architecture is flexible enough to support another company's vision entirely—Honda will be designing both the exterior and interior of these new EVs and engineering in its own unique "driving character."

Little is known about these planned cars except that both automakers are targeting an on-sale date of 2024, and they'll definitely be bigger than the adorable Honda-E electric hatchback recently released in Europe, which Honda steadfastly refuses to bring stateside. There's also one other nugget buried in the very last line of the press release: "Additionally, Honda plans to make GM’s hands-free advanced driver-assist technology available." Does that mean Honda's getting the keys to Cadillac's vaunted Super Cruise? The use of "hands-free" seems like a dead giveaway. We've reached out to a GM spokesperson to clarify, and we'll update when they respond.

As for the why, there are a few reasons Honda and GM are teaming up here. One is that GM needs to scale up its EV production quickly as possible in the face of still-lukewarm consumer demand, and selling the platform to Honda basically ensures a built-in margin to keep costs manageable. But as I mentioned up top, this announcement is more of a capper to the two OEMs' will-they-won't-they sitcom relationship dating back to the early 1990s. That's when Honda started selling a rebadged Isuzu Rodeo as its first SUV, the Passport.

Following that, Honda and GM got together on the powertrain for the mid-Aughts Saturn Vue, fuel-cell research in the 2010s, and more recently the Cruise Origin autonomous ride-sharing concept after Honda invested $750 million in GM's self-driving subsidiary in 2018. So it's clear the two are comfortable working in this space together.

It's also worth mentioning that Honda's probably impressed with the platform and battery tech, too. The NMCA (nickel, manganese, cobalt, and aluminum) chemistry has been remixed to lower the amount of expensive and environmentally-problematic cobalt in the cells. Packs with 50 to 200 kWh capacities are on the table supporting Level II fast-charging, a potential 400-mile range, and when paired with the right electric motor, a sub-three-second 0-60 mph time. The so-called pouch design of the cells mean that the batteries can be stacked or shifted around as needed for a deeper floor or better weight balance. And the platform can accommodate front, rear, or all-wheel drive.

If all goes well, these might not be the last two cars GM and Honda co-create.

“We are in discussions with one another regarding the possibility of further extending our partnership,” a Honda executive said in the release.