What I Discovered at My First Easter Jeep Safari in Moab

Among soaring slabs of sandstone, thousands of Jeep fans converge and the brand tests out its newest concepts. 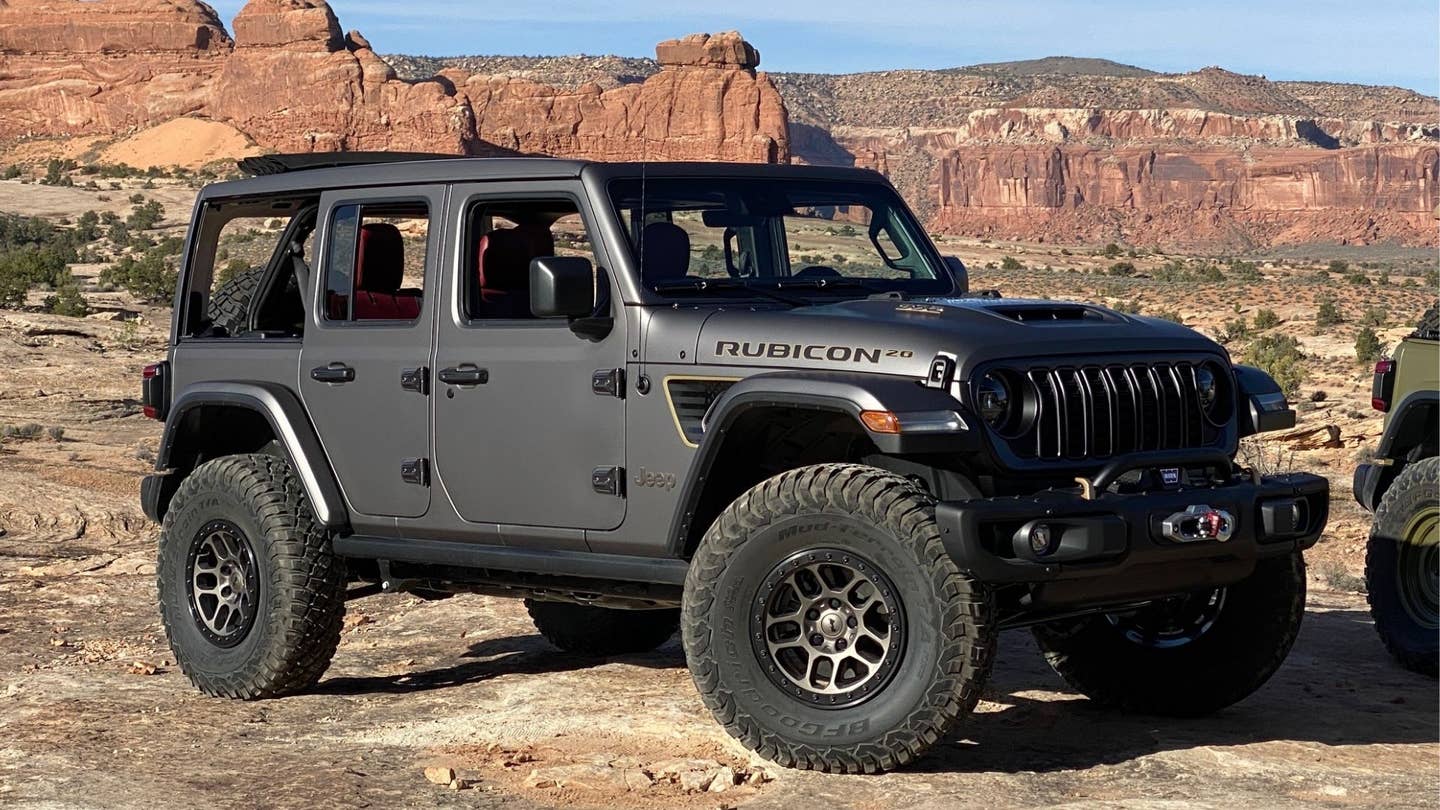 If you stand on Main Street in Moab in the middle of April, someone driving a Jeep product will pass by approximately every 2.1 seconds. Moab is alive with Jeep juju, so it must be time for the annual Easter Jeep Safari, a week-long celebration of all things off-road. Thousands of people who are members of the church of slick rock crawl all over the routes that skirt around Arches National Park and obstacles with colorful names like Hell's Revenge and Poison Spider. Every turn is magnificently carved by nature from cross-stratified Navajo sandstone.

This is my first Easter Jeep Safari, and I’m checking it off my mental bucket list with glee. After two flights broken up by a four-hour layover in Denver, I arrive at the Moab airport. It’s a tiny place with one gate in a compact terminal; the ground crew dumps all the luggage in one semi-flat outdoor bin after each flight. The airport is less than 20 minutes from downtown Moab, and I hop into a Jeep Wrangler Rubicon 392 and fire up the V8 to get from there to the Hoodoo Moab Hotel.

Jeep’s “home away from home” is in the southeast quadrant of Utah, where red sandstone throws majestic shadows over the desert. The brand is very much at home here, and a substantial team flies in from Detroit to test out the newest crop of Jeep concepts. Easter Jeep Safari started out as a one-day affair in 1967, when the Moab Chamber of Commerce organized the event to attract tourists. Now, Jeep (and Jeepers) descends on Moab in force to drive on some of the toughest terrain Utah has to offer for off-roaders. While there, Jeep execs, product representatives, and engineers meet with customers who don’t pull any punches about what they like and don’t like about the brand’s vehicles.

It is Holy Week, which means more than one thing to the people here. Red Rock 4 Wheelers, the club that leads the Easter Jeep Safari, calls Moab the “Mecca of four-wheeling” and there is the obvious reference to Easter Sunday, which marks the end of the event. Plus, during the Easter Jeep Safari there are a number of commandments to follow to keep the area as pristine as possible for generations to come.

“Don’t bust the crust!” is one of those directives, which means that you should avoid stepping on the cryptobiotic soil that serves as the desert’s delicate crust. Crypto, meaning ‘hidden’ plus biota, which means ‘life’ forms the base of the word that describes a microcosm of green-blue algae, lichen, moss, fungi, and other important life-giving substances.

A representative from the Bureau of Land Management gives us a stern talking-to about the flora and fauna of Moab and keeps a sharp eye on where the vehicles are putting their wheels. As I arrive in the top-of-the-food-chain Rubicon 392 in Sarge Green, she watches my feet when I dismount to make sure I’m not violating the ground beneath me. Throughout the week, Jeep is conscientious about how drivers treat the public land because it's a unique, special place for testing and visibility.

Staying on the marked trails is also expected, and refraining from tailgating is a smart idea. Don't be a jerk on the trail, basically.

Jeep Concepts Put to the Test

An array of concept vehicles is splayed out in front of me, including a few I have been eagerly waiting to see in person: the striking red-on-black D-Coder, a chopped Gladiator dubbed the Bob, and the all-electric Magneto 2.0. The first Magneto was on hand at the Easter Jeep Safari last spring, and while it looks very similar this year on the outside, the brand gave the concept a huge power boost. Now it makes 850 pound-feet of peak torque, which is more than three times the output of Magneto 1.0, and a staggering 625 horsepower.

Jeep boss Jim Morrison takes the co-pilot role as I climb into the front seat of the Magneto 2.0; it’s a big hop up into the EV, since it’s rocking 40-inch-tall tires mounted to 20-inch wheels. They’re massive. Morrison coaches me through a quick primer on using the unusual stickshift in the Wrangler concept, and we take off along the rocks. How a manual could possibly work in an electric vehicle requires a fairly detailed explanation, and since Caleb has already done that on The Drive, I don’t need to repeat it all. Check out his post here.

At this juncture, Morrison indicates that rowing your own Magneto won’t be an option for the masses. It’s too expensive to build.

Once I hop out of the Magneto, I'm ready to test out the Bob, named as such for the "bobbed" back end of a Gladiator. Luckily for me, off-road coach and Rebelle Rally champion Nena Barlow is available to drive with me and offer off-roading tips, and we wheel across the trail under the orange glow of the Bob's canvas lid. This is one of my favorites, with its stumpy shape and brightly-colored accessories, and the Bob is a terrific host on the rocks.

Barlow, however, prefers the Industrial Blue Grand Cherokee Trailhawk 4xe. She appreciates the air suspension, sway-bar disconnect, and 20-inch metallic matte wheels wrapped in 33-inch BFG mud-terrain rubber. I like the custom upholstered seats with houndstooth inserts, which chief designer Mark Allen says is modeled after a jacket the late comedian Rodney Dangerfield would have worn.

Of course, I didn't miss a chance to drive the Kaiser Jeep M725 concept, which started out as a 1967 Kaiser Jeep M725 military ambulance. Custom rock rails protect the body and it rides on 20-inch, eight-lug Black Rhino Armory wheels wrapped in 40-inch tires. As soon as I started it up, my face broke into an ear-to-ear grin. Yes, it off-roads, too.

The population of Moab was 5,366 at the 2020 census, and it swells to at least four times that size during the Easter Jeep Safari. If the Chamber of Commerce members who kicked this event off in 1967 could see it now, they'd surely be astonished and delighted that their idea worked so well. Hotels dot the landscape and Jeep tour companies like Nena Barlow's are seeing steady work.

During Easter Jeep Safari, the general mood in town is of excitement and camaraderie; off-roaders exchange tips on routes and parts. Bilstein hosts a site and a number of wrapped vehicles tool around town, advertising the brand. BFGoodrich hosts a garage right on Main Street and it's open to all. You bring the parts and they'll fix just about anything for you, gratis, whether or not your vehicle is riding on any of the BFGoodrich brand tires. They'll even swap out an engine if they have to, one of the mechanics told me. That's pretty dang generous.

As I leave Moab, I stop at the local rocks and fossils shop for a souvenir in the hopes that it will hold me over until my next visit. I already can't wait for 2023.

Got a tip? Send me a note: kristin.shaw@thedrive.com.

Alongside its rock-crawling skills, Magneto 2.0 can also zoom from zero to 60 mph in two seconds with “electronic nitrous oxide.”