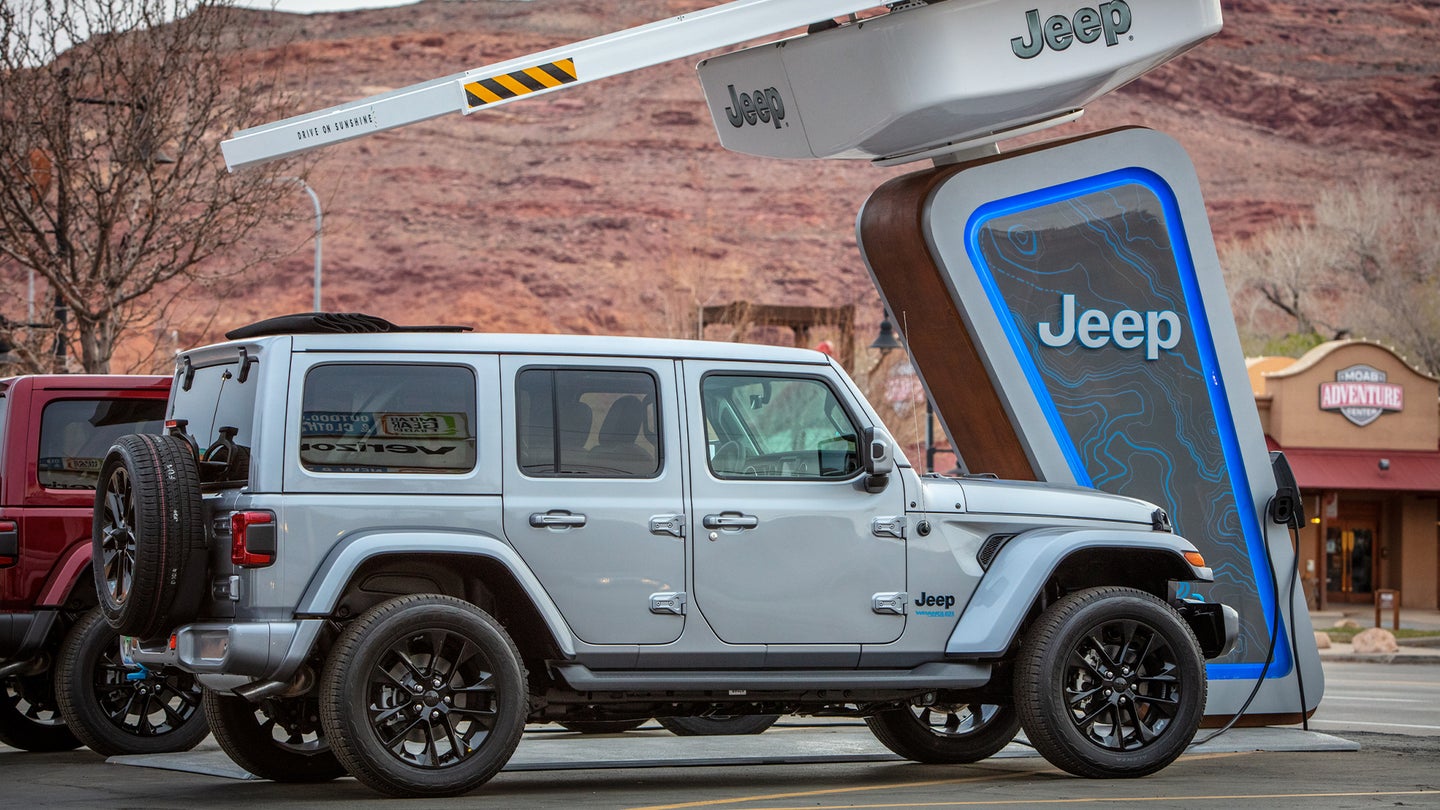 Before long, the argument against electric vehicles and overlanding will be bogus. I'm not saying that'll be the case tomorrow, but car companies are certainly working on solving the problem of limited range and even more limited charging supply. Jeep is setting itself up for the long-run, starting now, with its 4xe Charging Network that's coming to trailheads nationwide thanks to a collaboration with Electrify America.

As Jeep announced Friday, it plans to have Level 2 (240-volt) charging stations at a list of trails by the end of 2021; some will be solar-powered while others are set to be wired directly into the power grid. A few are slated to open as soon as this spring, starting with the most popular locations for Jeepers—Moab, Utah; the Rubicon Trail in California; and Big Bear National Park. They're specifically for Jeep's plug-in hybrid models, like the Wrangler 4xe with its 375 horsepower, 470 pound-feet of torque, and 21 miles of all-electric range. If I were a betting man, though, I'd wager on an even bigger investment coming down the line.

We're getting a taste of Jeep's future electric models with the Wrangler Magneto Concept, but don't expect the eventual Wrangler EV production variant to have a manual transmission. They'll be wheeling the Magneto in Moab all week to test its reliability on the dusty Utah trails, but assessing its range will also be key. Off-roaders tend to be a hard group to convince, especially when it comes to something as radical as electrification.

Still, Jeep's new network should be a solid start as Wrangler 4xe owners will have access to free charging via an app on their phone. Once their 17.3-kilowatt-hour battery is juiced up, they'll be able to tackle some of the nation's most famous trails with zero noise and zero emissions.

Exactly which trails Jeep and Electrify America will service next, we don't know. The automaker explained that they'll exclusively be installed at Jeep Badge of Honor trailheads, "an industry exclusive off-road rewards program to support enthusiasts looking to earn a Badge of Honor for their new Jeep Wrangler 4xe." That sounds like corporate hullabaloo, but it's likely safe to say that these will work their way across the states from the west since that's where EV charging infrastructure is strongest.