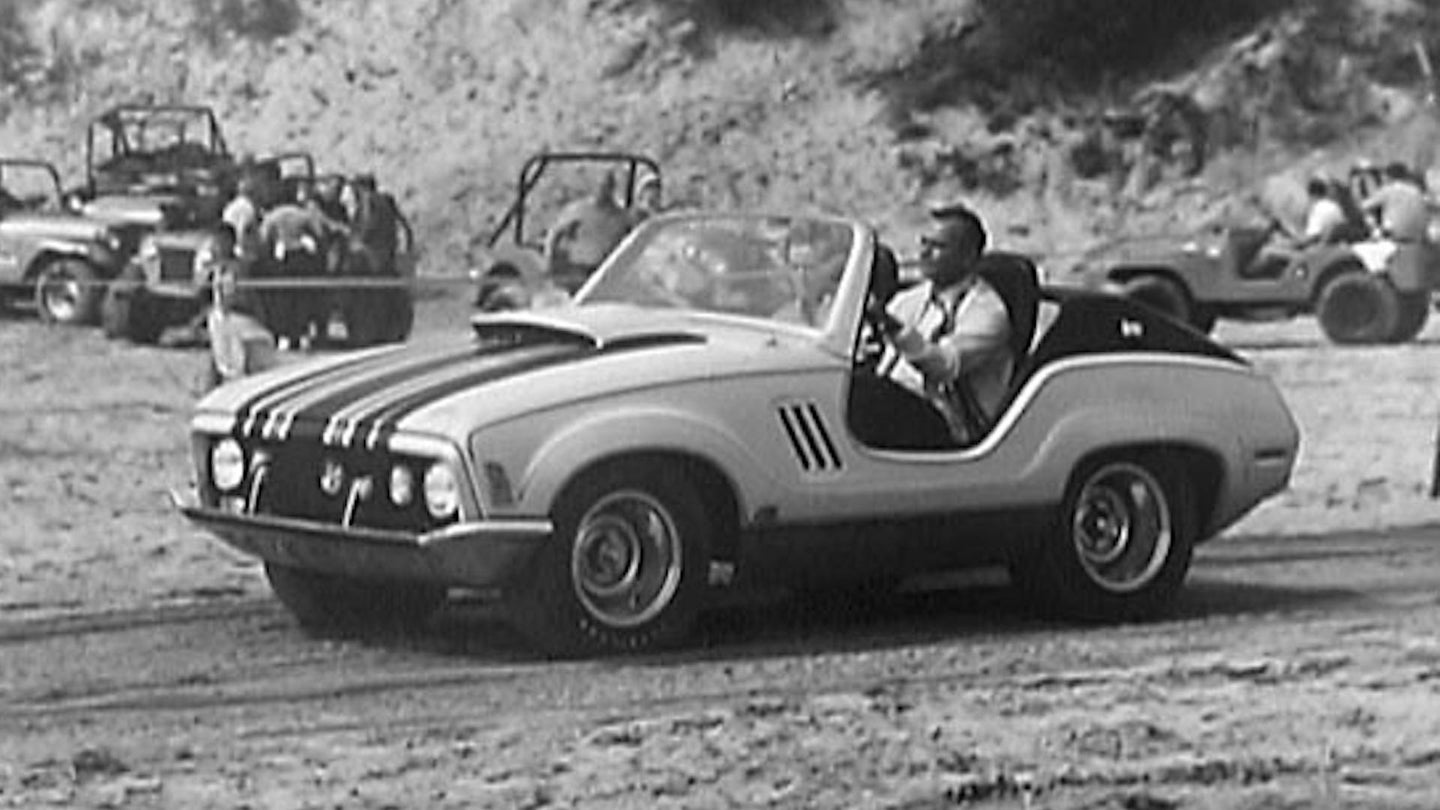 Jeep is a name synonymous with American SUVs that might have some off-road capability, and definitely look like military dress-up. On another timeline, though, our notion of a Jeep could have been broadened by the production of a forgotten sports car concept, the XJ-001. It could've combined muscle car looks and performance with Jeep's off-road chops, had it not been abandoned following Jeep's takeover by the American Motors Corporation.

The Jeep XJ-001 was reportedly conceived at the end of the 1960s, during which four-wheel-drive, off-road recreational vehicles were the fastest-growing segment in the country. Jeep responded to this by commissioning a concept for a short-wheelbase sports car with minimal overhangs and old-school, roadster-style door cutouts.

Relative to the most famous roadster of all time, the NA Mazda Miata, the Jeep XJ-001's fiberglass body measured nearly a foot shorter, but half a foot wider, and at the top of its windshield (whose beefy frame doubled as a roll bar) some nine inches taller. Its 81-inch wheelbase was about eight inches shorter than the Miata's, and less than one longer than a Mini—it was identical to that of the Jeep CJ-5, on whose chassis it was based.

But while the CJ-5 never got a powertrain more potent than a 304 cubic-inch V8, the XJ-001 got an AMC 360 V8, which produced 245 gross horsepower and 365 pound-feet of torque according to Gans' AMC Info. These traveled through a four-speed manual transmission to a two-speed transfer case enabling full-time four-wheel drive, christened "Quadritrac," a name that would later evolve into Jeep's Quadra-Trac. Manually locking hubs were encircled by Goodyear Polyglas GT tires—apparently common on American performance cars of the era.

On-road performance doesn't appear to have been recorded, but between the XJ-001's torquey engine, four-wheel drive, and a curb weight estimated to be as little as 2,100 pounds, it would've been damn quick in its day. Appropriately, Popular Mechanics described the XJ-001 as "a Jeep in wolf's clothing."

The single handmade Jeep XJ-001 debuted in 1970, at the New York Auto Show, where it was apparently well-received. That year, Kaiser Jeep came under the ownership of AMC, whose opinion of the XJ-001 appears to be the subject of debate. Mac's Motor City Garage alleges the XJ-001 was "accepted with enthusiasm by American Motors brass," while Hemmings indicates corporate saw no place for the strange little concept car in its lineup.

In either case, the XJ-001's popularity kept it on tour where, as many promising young stars do, it crashed and burned. Literally. En route to the Texas State Fair, the van carrying it allegedly overturned, causing a fire that claimed the one and only XJ-001.

That didn't mark the end of the line for the idea of a Jeep sports car, which was also explored by the similar XJ-002, and nearly 30 years later, by the 1998 Jeepster concept. Still, neither quite had the charm of the XJ-001, which by breaking the mold of Jeep styling challenged the world's idea of what a Jeep could be. And with Jeep seemingly stuck paying endless tributes to Willys, a car like the XJ-001 isn't one I can imagine it ever designing again.

The key fob allegedly loses connection with the vehicle, at which point it’s rendered immobile.