It's a Jeep thing, you wouldn't understand. 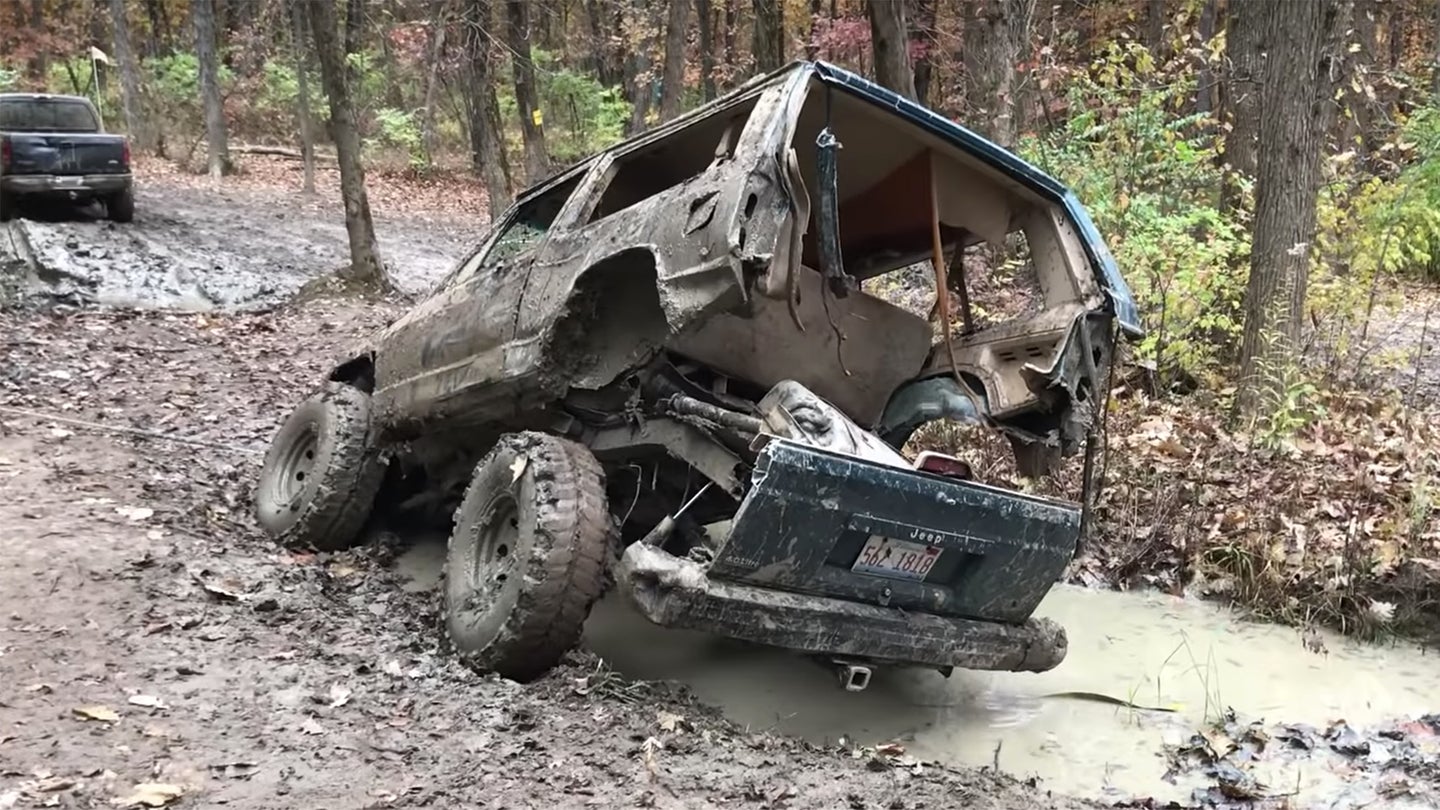 Some Jeeps live harder lives than others. There are those who spend it pounding pavement, facing nothing so much as a gravel driveway, knowing no real danger other than the pernicious ticking of time. Then there are rigs like this feral beast; raw, angry things that can only find purpose out there in the wilderness—and occasionally, fate as well. So pour one out for this old XJ Jeep Cherokee, whose body and frame mostly parted ways during a rough recovery from a mud pit. Hey, better than a slow death by road salt.

The video picks up after the messy divorce has already begun. It all started when the driver of the two-door Cherokee needed help after putting his right side into a deep mud hole along a wooded trail at The Cliffs Insane Terrain Off-Road Park in northern Illinois. A kindly soul in an old Jeep Wrangler stopped to yank him out, at which point things went very, very wrong.

This grotesquerie is what happens when you apply a strong twisting force to a very rusty frame.  Essentially, the winch line pulled the Jeep Cherokee at the exact angle needed to snap its weakened frame (which was already under pressure from the truck's tilted position) like a dry twig. The break caused the body to separate at the back—well, most of it anyway. For some reason, the single-piece tailgate split with its upper part attached to the roof and the lower panel still hooked to the top of the bumper below.

It's mesmerizing, really. The whole thing kind of looks like a demented mechanical face, with taillight housings for eyes and the tailgate panel as a giant mouth. The effect is amplified about thirty seconds in when the driver punches the throttle—yes, amazingly, the drivetrain is still intact—and the rear wheels try to roll underneath the cabin, forcing the tailgate jaw open even more.

Even more amazing is how the Jeep's body settles back on the frame at the end of the clip as the poor thing is finally hauled to solid ground. The video description also claims the driver was able to limp it back to the parking lot and avoid a painful off-road tow bill. But it's hard to imagine this thing getting back on a trail. That time and money is probably better spent on another beater SUV that hasn't had a catastrophic frame failure.