We don't think the rear axle is supposed to do that. 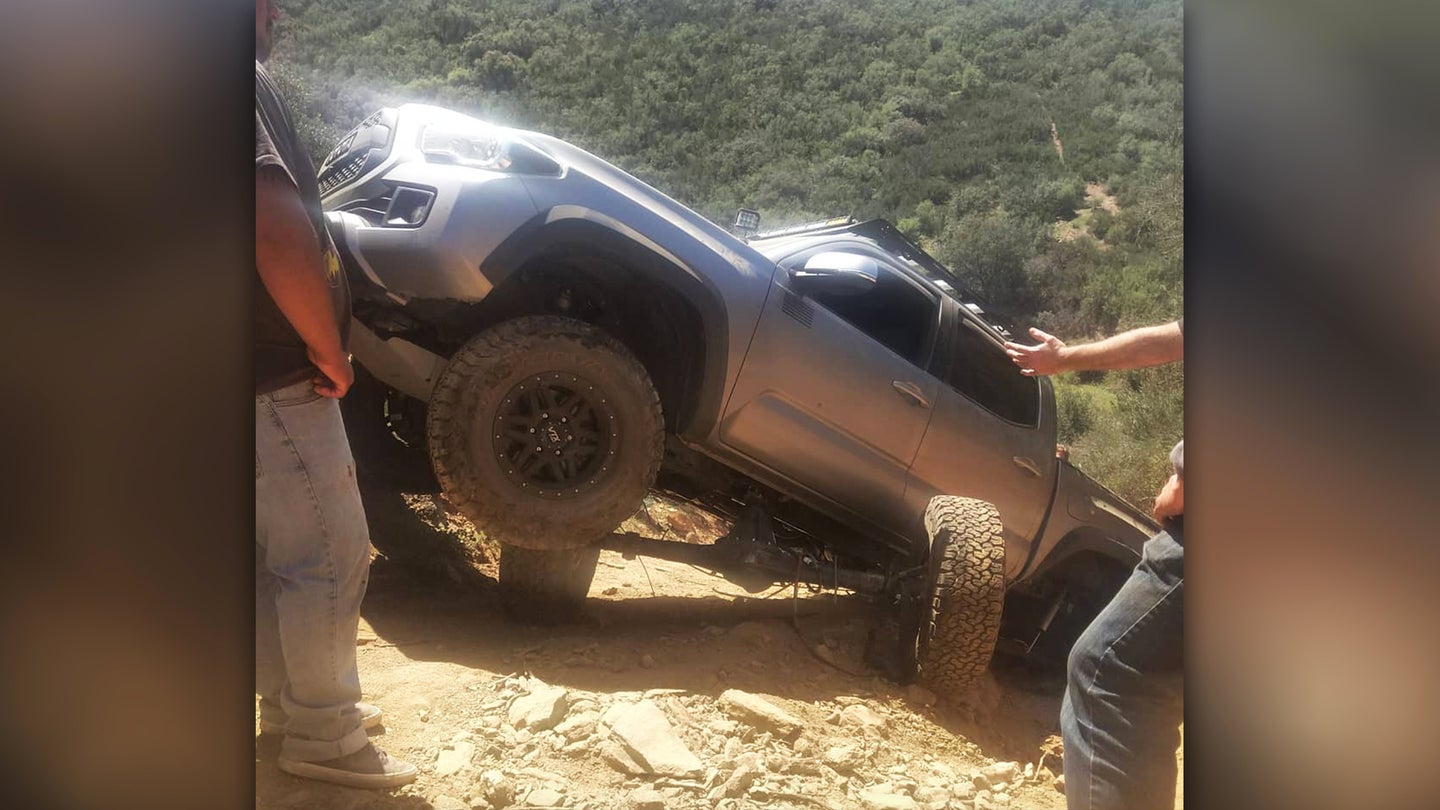 The Toyota Tacoma is a hardy little truck, but even its legendary reliability can't overcome the folly of man. And whether you're a master of off-road driving or a total stranger to the concept, this painful video of a new Tacoma losing its rear axle during a botched tow on a steep mountain trail is both captivating and excruciating to watch.

Here's the thing about off-roading: When things go wrong, they can go from bad to worse to completely unrecoverable in mere moments. A single unforced error, something as simple as putting a wheel here instead of there, can send a truck tumbling end-over-end down a mountain. That's not what happens here, thankfully. But the end result is just as tragic a sight, and considering the potential recovery bill, probably just as expensive.

The video opens showing a grey Toyota Tacoma stuck on a rocky trail, with an FJ Cruiser attempting to tow it back down the hill with its winch line. At first, the setup doesn't really make sense—why not let gravity do the work? However, it looks like driver has somehow locked up his rear axle. It's been speculated that a U-bolt broke and jammed everything, which would explain both the demonic groans and the way the axle begins to shift as the doomed pickup is dragged downhill.

With the encouragement of the crowd (Keep going, you're doing it!), the operation continues as the Tacoma's rear axle assumes an ever more grotesque angle. Eventually, it can take no more, violently detaching from the frame and slipping under the body like a roller as the truck slides further down the trail and lands in a heap.

It's not clear whether it hits the FJ, but either way, that is going to be one expensive recovery operation. It wouldn't have been cheap to pay someone who knows what they're doing to get an intact Tacoma off a mountain trail, but at least that option doesn't come with bonus repair bills.

The bottom line is this probably could have been easily avoided if someone present had enough experience to figure out a more optimal plan. Then again, that doesn't always work either; the video concludes with a man off camera sagely intoning that he knew that was going to happen.

UPDATE: Video surfaced by Jalopnik shows the crippled Tacoma was eventually pulled off the trail at Rowher Flats Off-Highway Vehicle Area in California by a few Good Samaritans. Teamwork really does make the dream work.