Converted units will have their original parts stored so they can be reversed back to ICE at any moment. 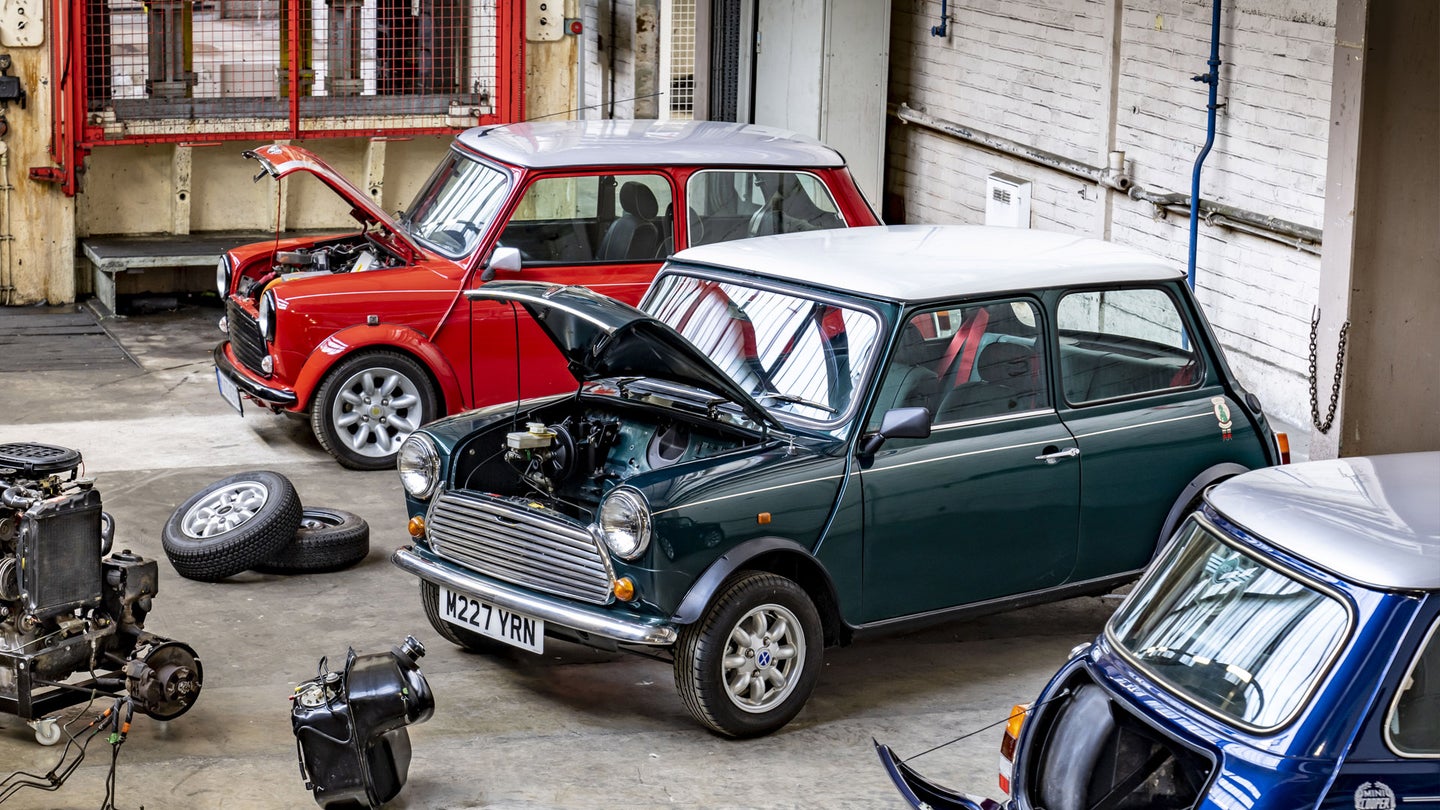 There's something about U.K. auto assembly plants and restomods lately. There's a real nostalgia binge going on, with Nissan's commemorative "Newbird" conversion, and now the Mini plant in the historic Harry Potter filming location in Oxford will be dedicated to building some exceptionally good-looking Mini EVs as part of a program called Mini Recharge. But don't worry, technicians won't be chopping these classic Minis apart to make them electric, they'll actually be carefully modernizing them with the option to restore them to ICE at any moment's notice.

As a brand, all of Mini is going to be electric anyway, but the BMW Group's been toying with classic conversions since 2018, when it unveiled this lovely model at Formula E's Hong Kong Eprix. I was there and can testify it was incredibly tempting to steal it. Then, of course, a proper production electric Mini got released and became Formula E's safety car. Now that BMW's exited the series, it can focus on making cool electric Minis without having to tie them into a larger project somehow.

Although there have been unofficial EV conversions for classic Minis over the years, Mini announced today that it will be officially kickstarting a plan that was born back in 2018 at Oxford, when that first electric classic Mini came to life—a true labor of love. The way it's being done, Mini promises, is to preserve the "traditional go-kart handling" of a classic Mini without radically altering the classic chassis, with only reversible changes being made to accommodate the electric drivetrain and battery.

As part of the plan, every classic engine removed from the cars will be cataloged and looked after, so that if anyone who makes a conversion EV changes their mind later on, or decides to restore it back to classic spec, they'll be able to. So don't worry, BMW isn't planning on taking an angle grinder to Mini's classic heritage, this is a project to protect it and give it a new lease of life.

"What the project team is developing preserves the character of the classic Mini and enables its fans to enjoy all-electric performance," said Bernd Körber, Head of the Mini brand in a press release. "With MINI Recharged, we are connecting the past with the future of the brand."

This is all very nice, and it does actually sound like they've thought it through pretty well, here.

As far as the numbers; the drive train being added goes up to 90 kW (120 horsepower), with Mini saying it moves the classic car from 0-62 mph in about nine seconds. Minis were never really long-range vehicles, especially not the classics so it's probably not a downgrade for a lot of the conversions to have about a 100-mile range (160 kilometers according to the release).

And don't worry, Mini did think of the infotainment. There's a special custom display dash that fits in the classic display but gives you more EV-relevant knowledge, like range and battery temperature. It truly seems like they thought of everything.

It’s a new variation on a continuing theme, with the retro styling intact.

People say the Mini is overpriced, but that’s not the case for this model.