How do you say “It’s van time” in Mandarin? 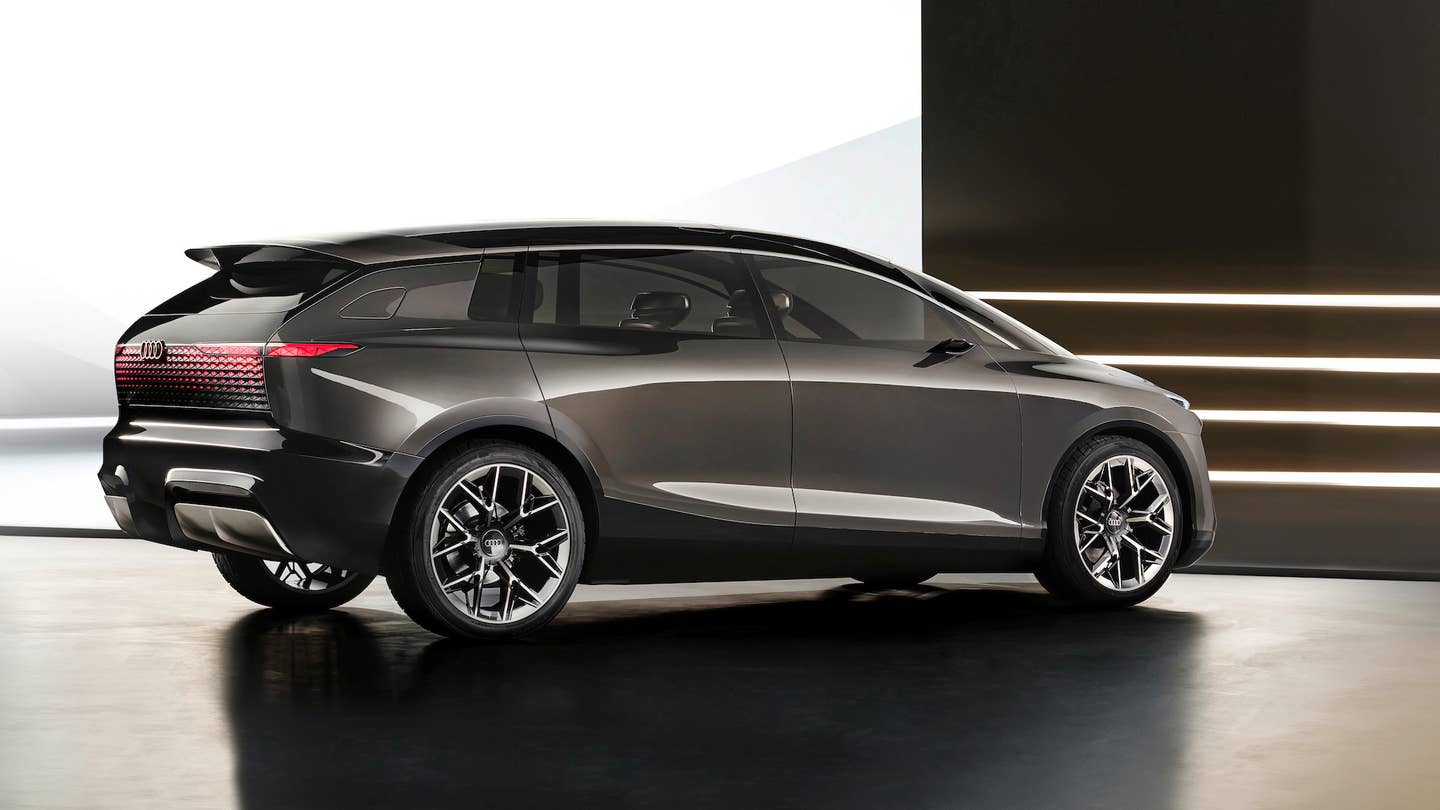 After tackling the future of sedans and convertibles with its Grandsphere and Skysphere concepts, Audi is bringing out the third and final entry in its spherically-themed trilogy of concept cars. And, guess what? It's a van! Say hello to the Audi Urbansphere concept: a luxury, three-row, six-seater EV with a boatload of interior room and little to no off-road pretense. In fact, it was apparently made for Chinese "megacities" in mind, where space is at an extreme premium.

Hence, the Urbansphere boasts the absolute most outright interior space of any Audi ever. Not all that surprising when you learn that the vehicle is 18 entire feet long and has a wheelbase measuring 134.4 inches, longer than that of the A8 L. To give a better sense of scale: those wheels are 24 inches in diameter. Those very over-the-top lighting treatments front and rear, by the way, are said to mimic the lights of Chinese skyscrapers at night.

Created by Audi design studios in both Ingolstadt and Beijing with input from Chinese customers, the Urbansphere is fresh from the inside out, with its ultra-swank lounge-style interior being the primary focus. This becomes apparent when you see how the doors on this thing swing open. Instead of Dodge Caravan-style rear doors that slide, this Audi features suicide rear doors which pair with the traditional fronts for a B-pillarless and very grand double-door effect. There's even a light-based "red carpet" that rolls out when these open, welcoming the Urbansphere's very important owners into the cabin. A cabin that contains seats—lounge chairs, really—that swivel outward, presenting themselves to their occupants.

Once inside, those chairs can swivel around so passengers face each other. If they aren't all that friendly, there are privacy screens that can be deployed from behind the headrests. There's also a minibar-like arrangement in between in case those occupants would like to become friendly.

Each seat has its own headrest speakers and screens but entertainment can also be enjoyed as a group through a gigantic, transparent OLED "cinema screen" that comes down from the glass roof and takes up the entire width of the cabin. Eye-tracking with gesture controls lets occupants toggle various systems without the use of physical dials or buttons.

Speaking of sci-fi level technology, Level 4 automated driving is part of the Urbansphere's deal with the steering wheel, pedals, and displays able to be hidden away completely. When it comes to the mechanicals, it's pretty typical luxury EV stuff; dual-motor all-wheel drive, adaptive air suspension, rear-wheel steering. The motors produce a total of 395 horsepower and 509 pound-feet of torque and draw power from a 120-plus kWh battery. Packing an 800-volt system, the 270 kW-capable Urbansphere can regain up to 186 miles of range in just 10 minutes of DC fast charging. Five to 80 percent can apparently be accomplished in under 25 minutes. On the WLTP cycle, Audi is claiming 466 miles of range.

Oh, and if the idea of an ultra-luxury, self-driving Audi van wasn't exciting enough, this thing apparently comes with a "self-illuminating" Audi Light Umbrella. Made specifically to cater to this car's audience, this built-in umbrella is made of reflective material, lights up the path in front of you, and brings a bit of a Rolls-Royce vibe to urban, modern megacity commuting.

Jury's still out on whether the Urbansphere or something like it will actually come to production—Chinese market or otherwise—but either way, it's nice to know that automakers like Audi still remember what vans are and haven't gone completely SUV-crazy.

Got a tip or question for the author about the Urbansphere Concept? You can reach him here: chris.tsui@thedrive.com

The Skysphere isn’t just a sports car or a grand tourer. It’s both.