Though it was under manual control at the time, Toyota suspended use of its “e-Palette” autonomous shuttles after the incident. 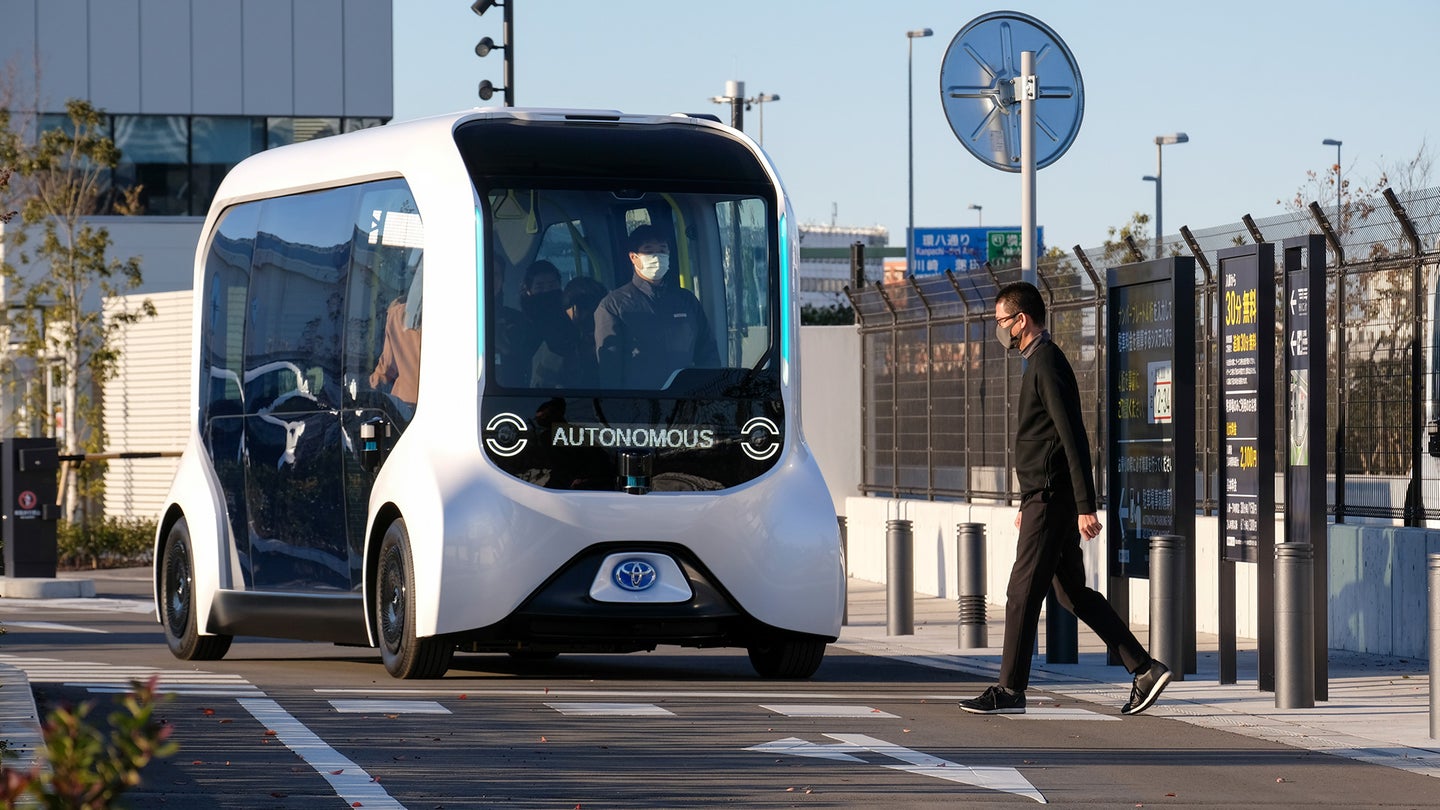 For the Athletes’ Village at the 2020 Tokyo Olympic and Paralympic Games, Toyota deployed a fleet of e-Palette all-electric and autonomous vehicles to shuttle participants to and from events. It was meant to show the future of the automaker's mobility services. However, all e-Palette operations have been suspended after one of the vehicles collided with a pedestrian on Thursday, according to an official statement.

The e-Palette hit a visually impaired pedestrian who was "about to cross a pedestrian crossing," the statement read. While stopped at a T-intersection, the e-Palette's human operator apparently collided with the athlete when they went to make a turn while going "at around one or two kilometers an hour," and that the athlete was able to walk back to where they were staying after being taken into treatment, reports Reuters, citing a video statement from Toyota CEO Akio Toyoda. The athlete reportedly did not lose consciousness.

“It shows that autonomous vehicles are not yet realistic for normal roads,” Toyoda said in the video. Toyota says it's currently suspended all e-Palette operations and is fully cooperating with the police investigation. It also apologized to the athlete and wished them a quick recovery.

The Toyota e-Palette was announced at CES in 2018 and debuted at the 2019 Tokyo Motor Show. For the Olympics, it was used as a loop-line bus service to transport people around the Olympic compound during the games. It runs on fully electric power and has autonomous abilities. A December 2020 press release stated the vehicles allowed for "a single person to manage several vehicles, rather than one person continually monitoring one vehicle, which enables operation with fewer workers," though it appears as though the e-Palette, in this case, was manned by a human.

You can see more of the e-Palettes in action below.

We've reached out to Toyota for any specifics of the investigation, whether this will impact its future mobility endeavors, and for more information as to who was operating the e-Palette at the time of the collision. We will update this post if we hear back.

Update 3:12 pm ET: A Toyota spokesperson responded to our request for comment by saying that, despite the e-Palette's current suspended operations, "we have not announced that we will be stopping our efforts in future mobility."

"In fact, we are waiting to see if operations at the Games will be allowed to resume," the person went on, "although as of this writing, the schedule for resuming operations for e-Palette at the Paralympic Games has not yet been determined. (The Tokyo Organizing Committee would have the final say on this anyway.)"

They also clarified that the December 2020 press release linked above "is more about our future aspirations and not the current set of vehicles that have been operating at the Paralympics." Instead, they pointed us to a separate release from October 2019 that reads, "The vehicle will be controlled by an automated driving system capable of operating up to 20 kilometers per hour at SAE level 4, supported by an on-board safety operator."

Toyota Will Build Fuel Cell Drivetrains In Kentucky From 2023

The Japanese automaker is pushing hard for hydrogen technology.

Bitcoin is out, bags of grain are in.