Toyota Is Building a Prototype City Full of Autonomous Vehicles, Robots, and AI

Measuring 175 acres, the high-tech community will sit at the base of Mt. Fuji and become home to 2,000 people. 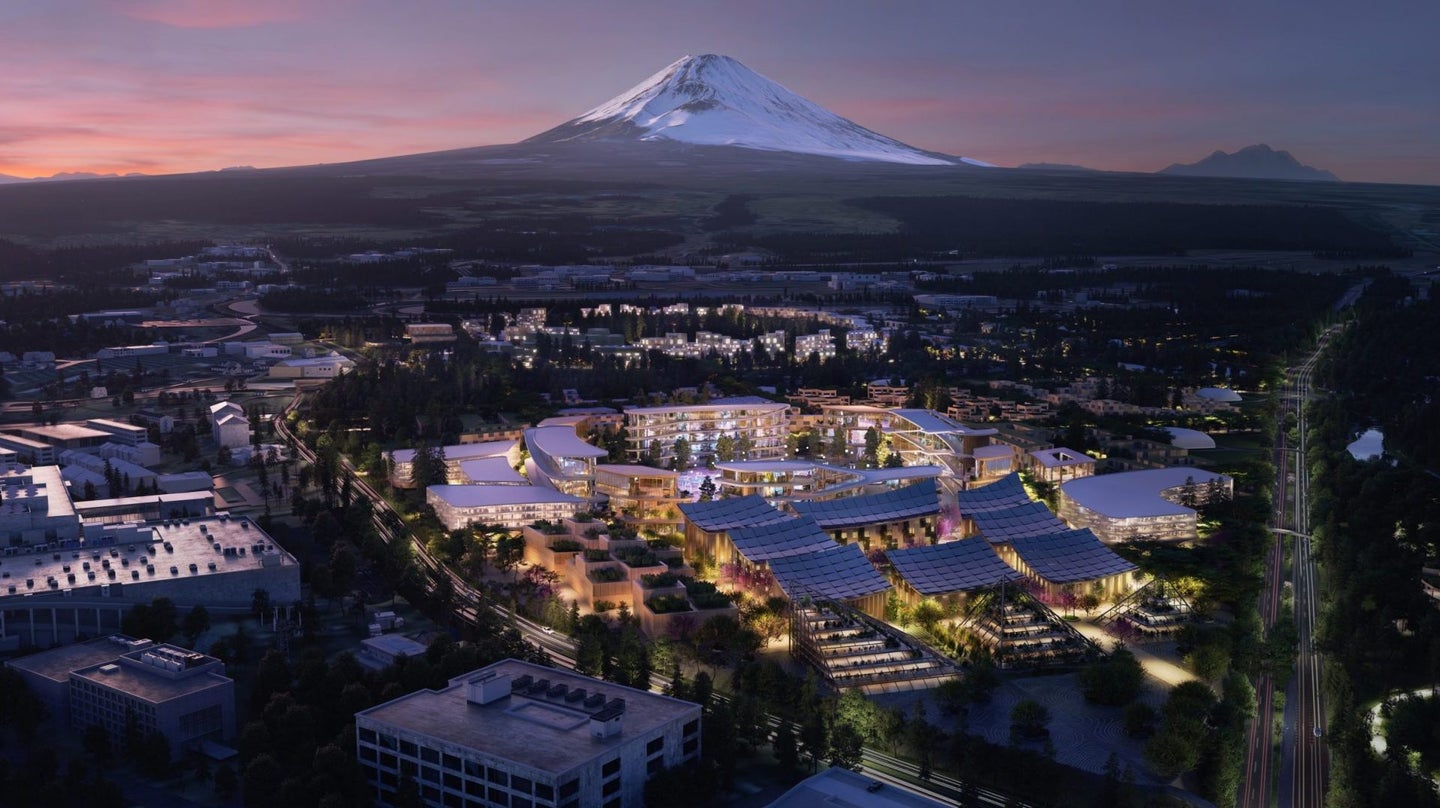 Despite already having a full-fledged Japanese city named after it and being in the process of building its own Nürburgring, Toyota has unveiled plans at the 2020 Consumer Electronics Show to build a 175-acre prototype "city" as a sort of real-life laboratory for future tech. The utopia will be located at the base of Mt. Fuji, run on a connected ecosystem powered by hydrogen fuel cells, and be named Woven City.

Looking like something straight out of a science fiction movie—y'know, the part at the beginning when the aliens haven't landed yet—Toyota's Woven City will initially house a population of 2,000 including company employees and their families, retired people, retailers, scientific researchers, and folks from partnering companies with room to grow. The entire thing will serve as a testbed for "autonomy, robotics, personal mobility, smart homes, and AI."

"Building a complete city from the ground up, even on a small scale like this, is a unique opportunity to develop future technologies, including a digital operating system for the city’s infrastructure," said Toyota president Akio Toyoda. "With people, buildings, and vehicles all connected and communicating with each other through data and sensors, we will be able to test connected AI technology…in both the virtual and the physical realms…maximizing its potential."

Residents will be given in-home robots that check on people's health and can carry out basic household chores.

Featuring two neighborhood parks, one big central park, and one central plaza "for social gatherings," the Woven City is being designed by Danish architect Bjarke Ingels who was also responsible for New York City's upcoming 2 World Trade Center as well as Google HQ in Mountain View, California. Toyota says the entire town will be fully sustainable thanks to buildings made mostly out of wood with roofs covered in solar panels. Woven citizens will be able to traverse their experimental city along three types of streets: one exclusively reserved for "fast vehicles," another intended for a mix of lower-speed vehicles, personal mobility devices, and pedestrians, and, finally, pedestrian-only park pathways.

However, it doesn't sound like you'll be able to take your new Supra or even a Prius down that first type of street because Toyota says the only vehicles allowed within Woven's borders must be fully autonomous and produce zero emissions. Naturally, the company's futuristic, self-driving e-Palettes will be used for deliveries and public transportation, just like that one episode of Black Mirror.

If all of this sounds a little far-flung in the future, that's because it kind of is. Groundbreaking on the Woven City is scheduled to take place in early 2021. No completion date has been specified but we'd be pretty impressed if it's finished and operational sometime this decade.

One of the principles of The Toyota Production System is to “go and see it,” and so we did just that, touring Toyota’s latest manufacturing innovations outside Nagoya, Japan.