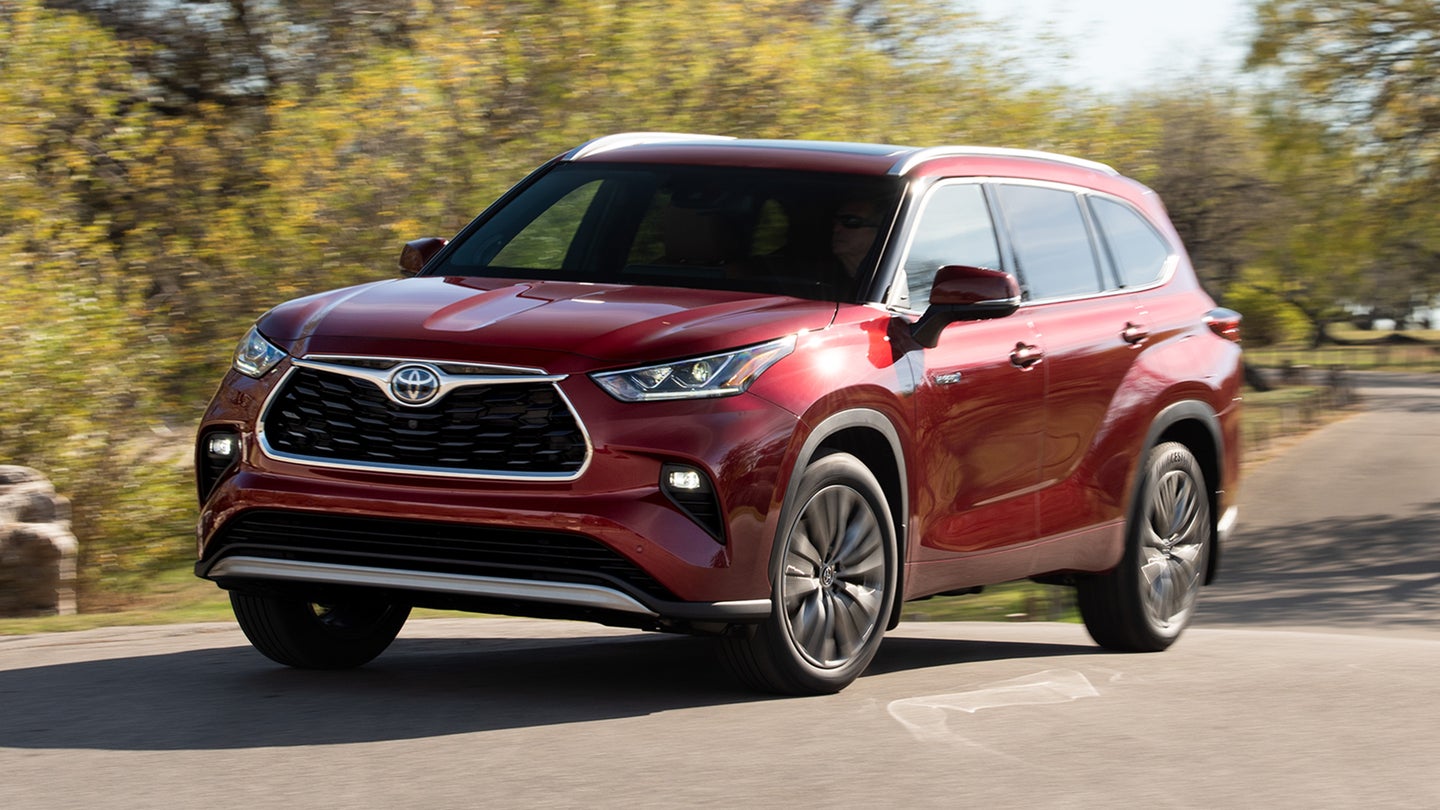 With each passing generation, the Toyota Highlander has grown. By Toyota’s own measure, that boxy, first-gen Highlander is around the same size as the current RAV4. With swelling dimensions also came burgeoning sales, peaking in 2018 when Toyota sold almost 245,000 Highlanders in the U.S. and won the segment in retail sales for the third consecutive year. Currently, one out of every nine cars Toyota sells here is a hybrid. By 2025, Toyota wants that ratio to be one in four.

One in four. A full quarter of the company's volume. To help meet such a lofty goal, the all-new 2020 Toyota Highlander and its all-important Hybrid variant continue its evolution by breaking into the TNGA era. Thus far, we've enjoyed how the automaker's family of modular platforms made the newest generations of its cars lighter, stiffer, cheaper to develop, and yes, better to drive. Toyota brought us out to San Antonio to see whether the 2020 Highlander continues the company’s streak of pragmatic excellence or falls flat on its restyled face.

The 2020 Toyota Highlander, By the Numbers:

Hobbling up to the 2020 Toyota Highlander, you'll notice this new model looks bigger than the one it replaces. But that's mostly a trick of the design—it measures 2.36 inches longer overall and 2.4 inches longer between the axles. The width is only increased by 0.2 inches while overall height and ground clearance go unchanged. The rest of the Highlander's visual bulk is down to details like its newly available 20-inch wheels and more bulbous, expressive bodywork.

Its design contains a mishmash of familiar Toyota elements from more prestigious members of the company’s lineup. The character line that flows from the bottom of the front doors and over the rear wheels is suspiciously Supra-like. The Highlander’s rear end could easily be mistaken for that of a Lexus NX. Though overall, the general look retains a good amount of its predecessor’s genetics. In fact, it almost looks like the concept car on which the last-gen model was based.

Climbing inside, Toyota has seemingly attributed most of the new Highlander’s physical growth to a lengthier cargo area because by most metrics, passenger room actually takes a dip compared to the outgoing Highlander. Without a moonroof, front row headroom drops by 0.8 inches while legroom shrinks by 3.8 inches. Second row passengers get half an inch less headroom than before but 2.6 inches more legroom while those relegated to the third row are just as cramped as they were in last year’s model. All in all, the 2020 Highlander offers 141.3 cubic feet of total passenger volume when optioned without a moonroof compared to the older model's 144.9 cubes.

Truth be told, unless you’re sitting in the two generations of Highlander back-to-back and/or a distant relative of Hagrid, the reduction is mostly academic. Plopping my 5’8” Asian frame in the first two rows, the 2020 Highlander is as roomy as I'd ever want a car of this type to be. Sure, the third row could be bigger but, again, so could the nosebleed seats of most if not all of its competitors. That last row of crossovers like these should really be treated like the back seats of a Toyota 86, or a bunk bed: a temporary space for adults.

It's also worth noting that the new Highlander's interior dimensions remain consistent whether you're in the hybrid or standard gas model, since the former's batteries are located under the rear seats and do not impede passenger or cargo room at all.

Meanwhile, interior quality is a clear leap forward. The new Highlander's cabin is attractive, intuitively laid out, and reasonably plush to touch in pretty much all the right places. Dashboard design aims for more outright style compared to what you get in, say, the Hyundai Palisade and Kia Telluride, or the Honda Pilot. It almost works; the multi-level construction makes it look a little busy, but at least the purse-swallowing center storage bin and in-dash cubbies make a welcome reappearance.

Standard only on the top-trim $46,850 Platinum and optional on the Limited, the massive 12.3-inch center touchscreen that Toyota boasts as being the biggest in the class is this interior's party piece. Despite how it looks in pictures, the Highlander's big optional screen doesn't actually feel all that immense or intimidating in-the-flesh, a compliment to how Toyota's dodged the dreaded "tablet-on-a-countertop" look by situating it between the prongs of Aquaman's trident.

Though it must be pointed out that we didn't really miss the big screen when we jumped into an XLE model with the standard eight-inch setup—the 12.3-inch black mirror has a dual-window display that can be unintuitive to use, while the smaller version is flanked with more redundant buttons. No matter which infotainment system you choose, Apple CarPlay, Android Auto, and Amazon Alexa thankfully come standard on all trims.

Like pretty much all of Toyota’s new-generation offerings, the redesigned Highlander is built on the company's modular New Global Architecture platform, specifically the K version that also serves as the basis for the Camry, Avalon, RAV4, and Lexus ES.

Under the hood is a 3.5-liter V6 producing 295 hp—largely carried over from the last model—or a new 2.5-liter hybrid making 243 combined horsepower. Toyota has gone ahead and nixed the old 2.7-liter gas engine entirely and downsized the Hybrid (it used to come with a 3.5-liter V6) in a push for all-out efficiency. As a result, the blue-badged Hybrid now achieves a seriously admirable 35 mpg with AWD or 36 mpg with the new-for-Hybrid FWD setup while the gas-only version's V6 is rated at 23 and 24 mpg combined paired with FWD and AWD, respectively. Pretty middle-of-the-road for the thirstier three-row crossover segment.

Still, the 2020 Highlander Hybrid can travel 600 miles without filling up and is unequivocally the most efficient Highlander ever conceived.

Speaking of AWD systems, the 2020 Highlander offers three of them. The Hybrid gets its own electric system that uses an independent e-motor at the rear axle, eschewing heavy, efficiency-zapping driveshafts and center differentials—a system also employed in the Prius AWD-e.

Meanwhile, the gas models get one of two AWD systems depending on trim. The L, LE, and XLE Highlanders feature a conventional AWD system (a $1,600 option) that can send up to 50 percent of the torque to the rear wheels. Spring for the fancier Limited and Platinum trims, however, and the Highlander gets gets a torque-vectoring AWD system (a $2,000 option) that can ferry torque between the left and right rear wheels via special couplings and run in FWD-only mode on the highway to conserve fuel.

Take into account the availability of seven- and eight-seat cabins, the 2020 Toyota Highlander can be had in 26 different engine, drivetrain, trim, and seating configurations if our math is correct. That differentiation is aimed at making the model as versatile as possible and widening the target audience, which is key if it's to reach the kind of volume that Toyota has in mind.

Even if Toyota's redesigned Highlander had an interior made of screens and a 2JZ-GTE under the hood, it still wouldn't be a very good car if it, well, wasn't a very good car. Thankfully, the TNGA architecture gives the car some actual backbone to work with, even if a 295-hp V6 hauling over 4,100 pounds of Japanese crossover is never going to blow anybody's hair back under hard acceleration, it's more than adequate for most real-life Highlander situations.

That's a little unfair. Really, acceleration is more than adequate for most real-life Highlander situations, and better than expected in the 243-horsepower Hybrid thanks to all that low-end electric torque. Efficiency has its drawbacks—the four-cylinder doesn't sound as nice as the V6, and we'll likely never get used to that e-CVT awkwardly holding its revs constant. But if you're just looking for a straightforward family runabout, we can't think of any practical reasons not to get the Hybrid. If you're willing to trade a whopping 12 mpg for a trim that's only slightly faster and sounds a little better, there are other ways to burn $35,000.

Regardless of engine choice or powered axles, Toyota's latest crossover moves competently for its size, feeling much lighter than it is. Something that could use a little more heft, however, is its steering. Ultimately, this is a car destined to be driven by everybody from airport shuttle employees to perpetually distracted parents. It has to be accessible. As a result, its steering is extremely light which is a good thing when slowly snaking it through gridlocked city streets but less of a boon on the open highway.

Y'know how most modern cars' steering wheels get heavier the faster they go? The Highlander doesn't really do that enough. Cruising down the Interstate with one hand resting at 3 o'clock without being careful will cause you to drift into the right lane. At which point, the Highlander's Lane Departure Alert will beep, causing the 1.9 babies sleeping in the middle row to suddenly wake and start wailing uncontrollably. Speaking of, all 2020 Highlanders come standard with Toyota Safety Sense 2.0 which includes:

Not a bad list. Much better calibrated than the over-sensitive steering are its brakes, dead easy to modulate and strong without being jerky. No complaints in the stopping department. Its ride is also smooth and comfortable without feeling boat-like but we would've appreciated a little less road noise. Quiet conversations can still be had, mind you, but Lexus-quiet this is not.

As for whether you should go for the AWD or FWD flavor of Highlander, we tried them out on a brisk December day in Texas with only periods of light rain and both drivetrains felt fine. If you happen to live in a colder and wetter climate and can stomach the price premium, AWD is never gonna hurt but I've said this before and I'll say it again: a proper set of winter tires is by far the better investment when it comes to winter-proofing your car.

Back in the Game

Earlier in the year, a 2019 Highlander would've been a bit of a hard sell over the recently-revealed and undoubtedly swanky Hyundai Palisade and Kia Telluride, not to mention the reborn Honda Pilot or the emotional Mazda CX-9. That gap is now closed with the 2020 Toyota Highlander. Subjective style aside—the Highlander's interior and exterior design doesn't look quite as aspirational as the Koreans of late—its mostly pleasant road manners, higher expected resale values, and gas-sipping Hybrid variant make it a serious competitor again in the big-but-technically-midsize crossover class. Mid-30 miles per gallon in a vehicle of this size is hard to argue with and pretty much unrivaled without venturing into the world of plug-ins and EVs.

If the new Toyota Highlander wants to help make the company's hybrids as ubiquitous as the Camry, it's off to a great start.

Correction [12/27/2019 3:00 p.m. ET]: The original version of this article misquoted Toyota in saying one in every nine cars it sells is a Highlander and that it aims to increase that number to one in four by 2025. The company has since clarified that those figures are referring to hybrids, not Highlanders.