The world's best-selling crossover gets even better with a real PHEV powertrain. 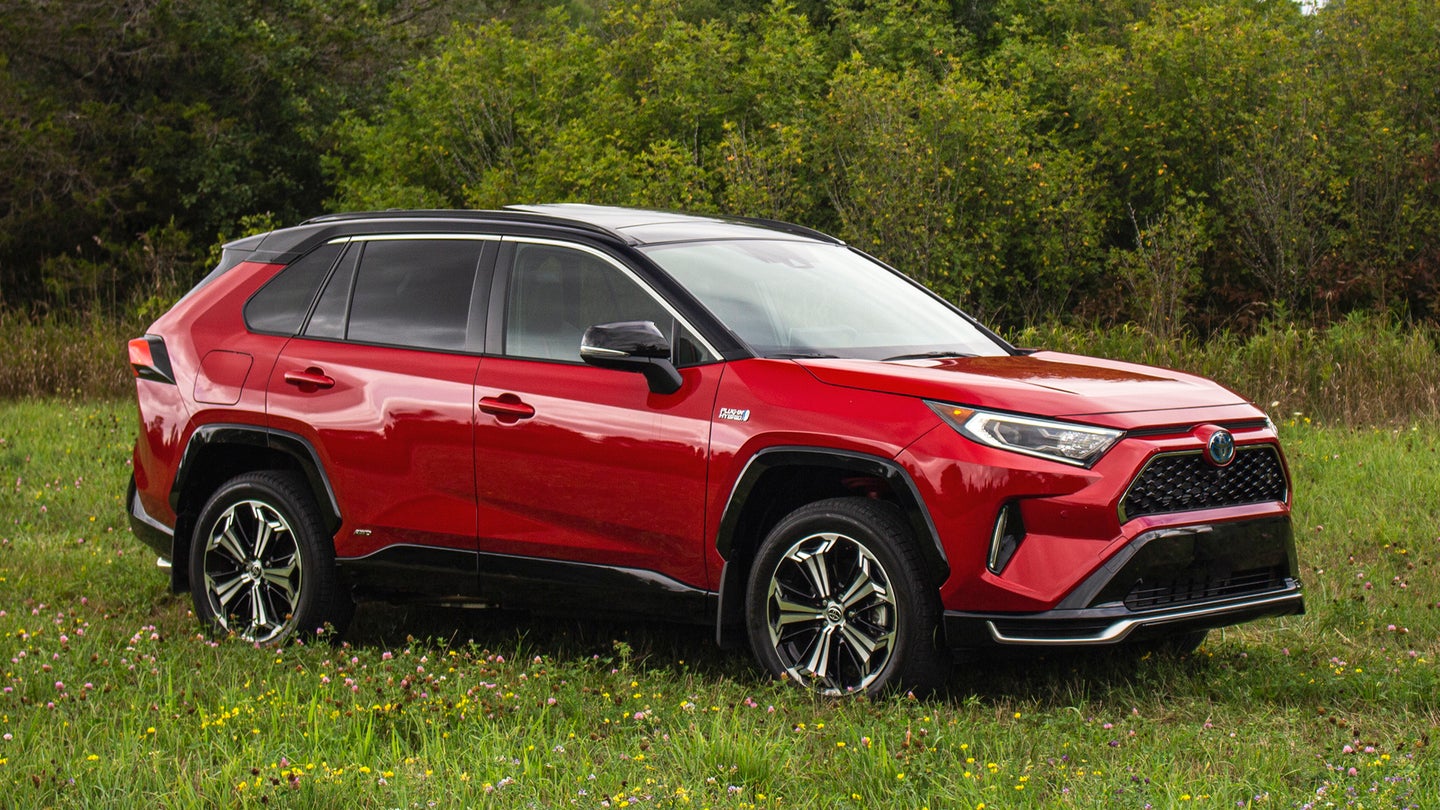 You probably know the RAV4 is a successful product for Toyota—what you probably don’t get just how successful it is. Last year alone, more than 500,000 were sold in the U.S. and Canada alone. That’s half a million Toyota RAV4s that found new homes in a single year, and in just two countries. Let that sink in for a minute.

No other compact crossover, not even the almighty Honda CR-V (439,000 units sold) can best this sales juggernaut. Toyota sold almost twice as many RAV4s in North America as Porsche sold cars, period, worldwide, last year. You’d think that after such a commercial success, Toyota would be content with the 11 trim levels the RAV4 currently offers. But no. It seems Toyota isn’t done ensuring its supremacy with this thing, because variant #12 has just joined the lineup.

It’s called the RAV4 Prime, and it's fair to say it's the model's ultimate form; a plug-in hybrid compact CUV that offers 40 mpg and can—somehow—outrun a Subaru WRX in the quarter mile. Customers recognize what Toyota's offering here, too. Demand for the RAV4 Prime is already so intense that dealers in certain states have tried slapping $10,000 markups on it, shenanigans you'd more expect to find surrounding high-hype cars like the new Supra. How’s that for market domination?

Winning On All Fronts

As I write this, there aren’t that many mainstream plug-in hybrid compact crossovers currently on sale. Except for this RAV4, your options are limited to a Mitsubishi Outlander or a Ford Escape PHEV. But none of them offer this Toyota’s range.

Toyota says the RAV4 Prime will drive up to 42 miles on pure electricity thanks to a 18.1 kWh battery nestled underneath the car’s floor for optimal packaging and weight distribution. That’s five miles more than what you’ll get from a plug-in hybrid Ford Escape. 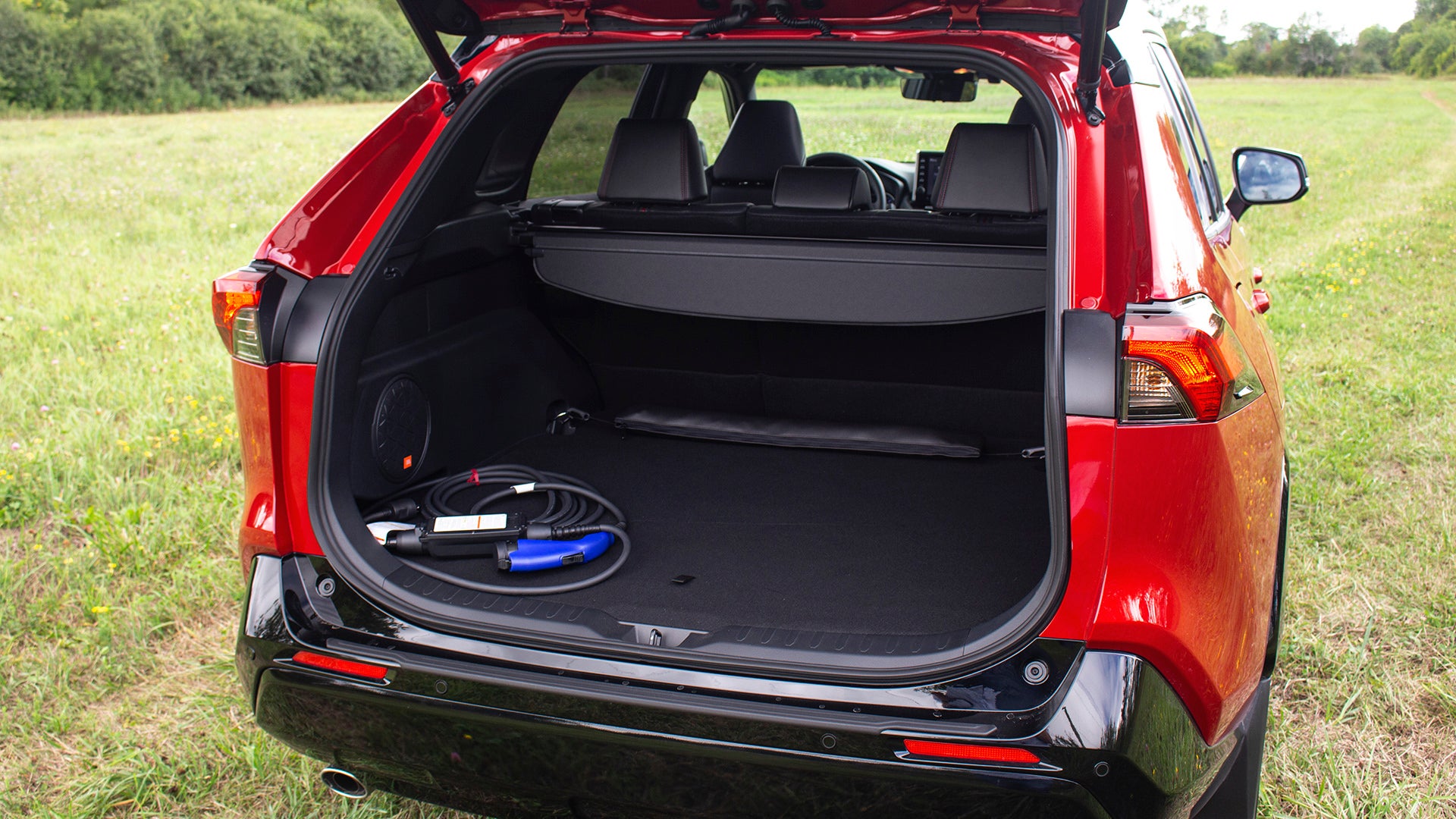 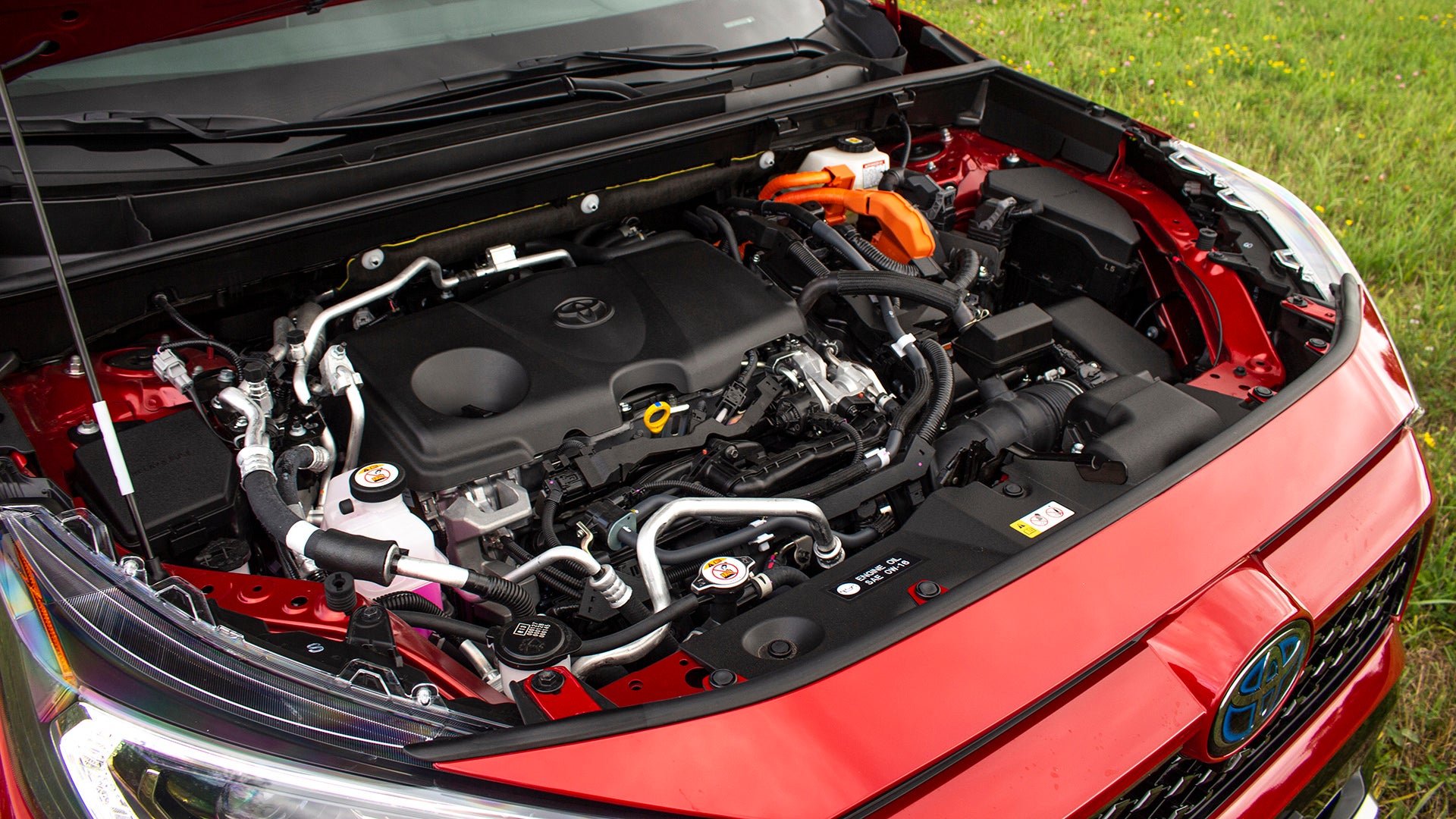 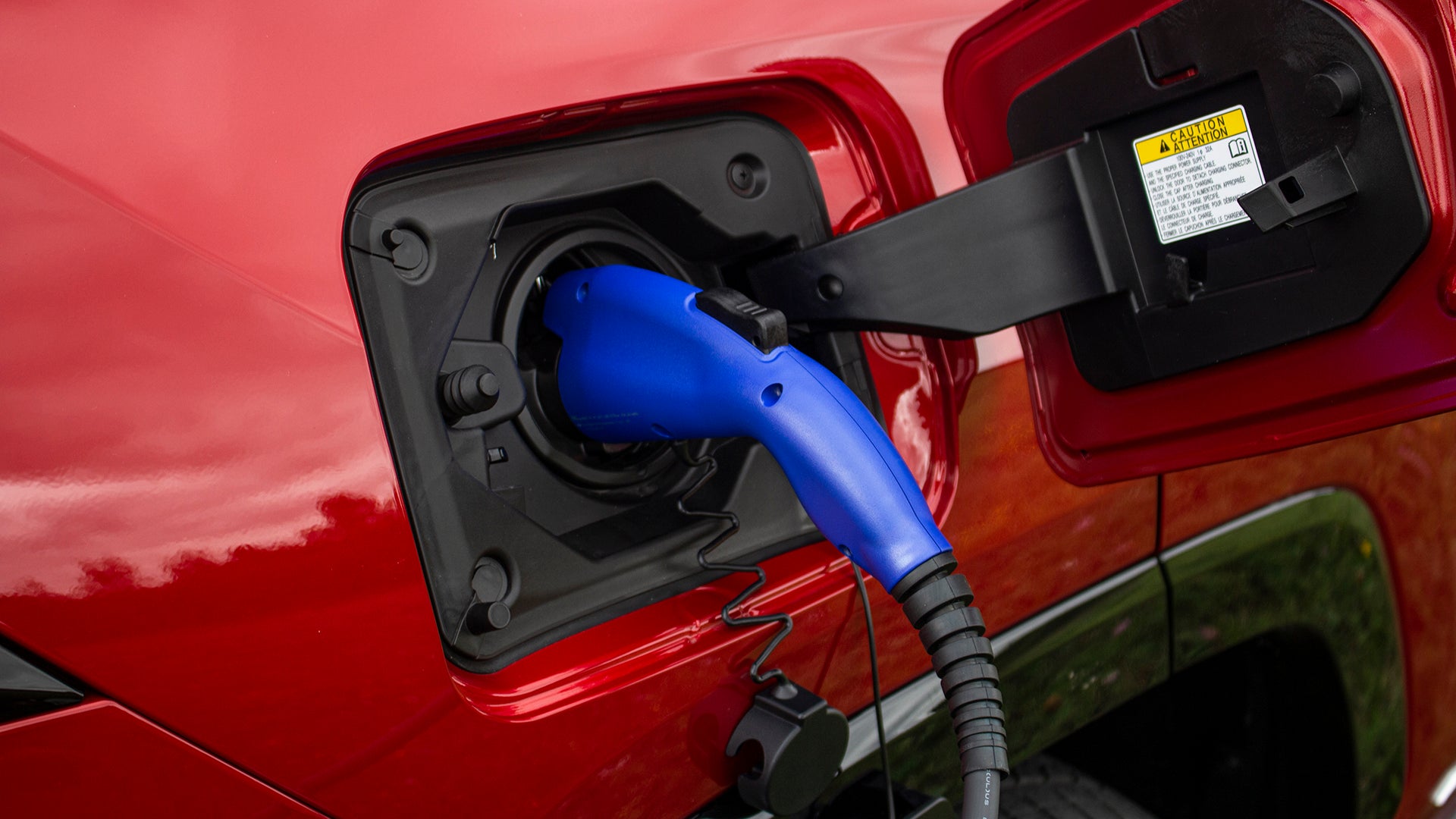 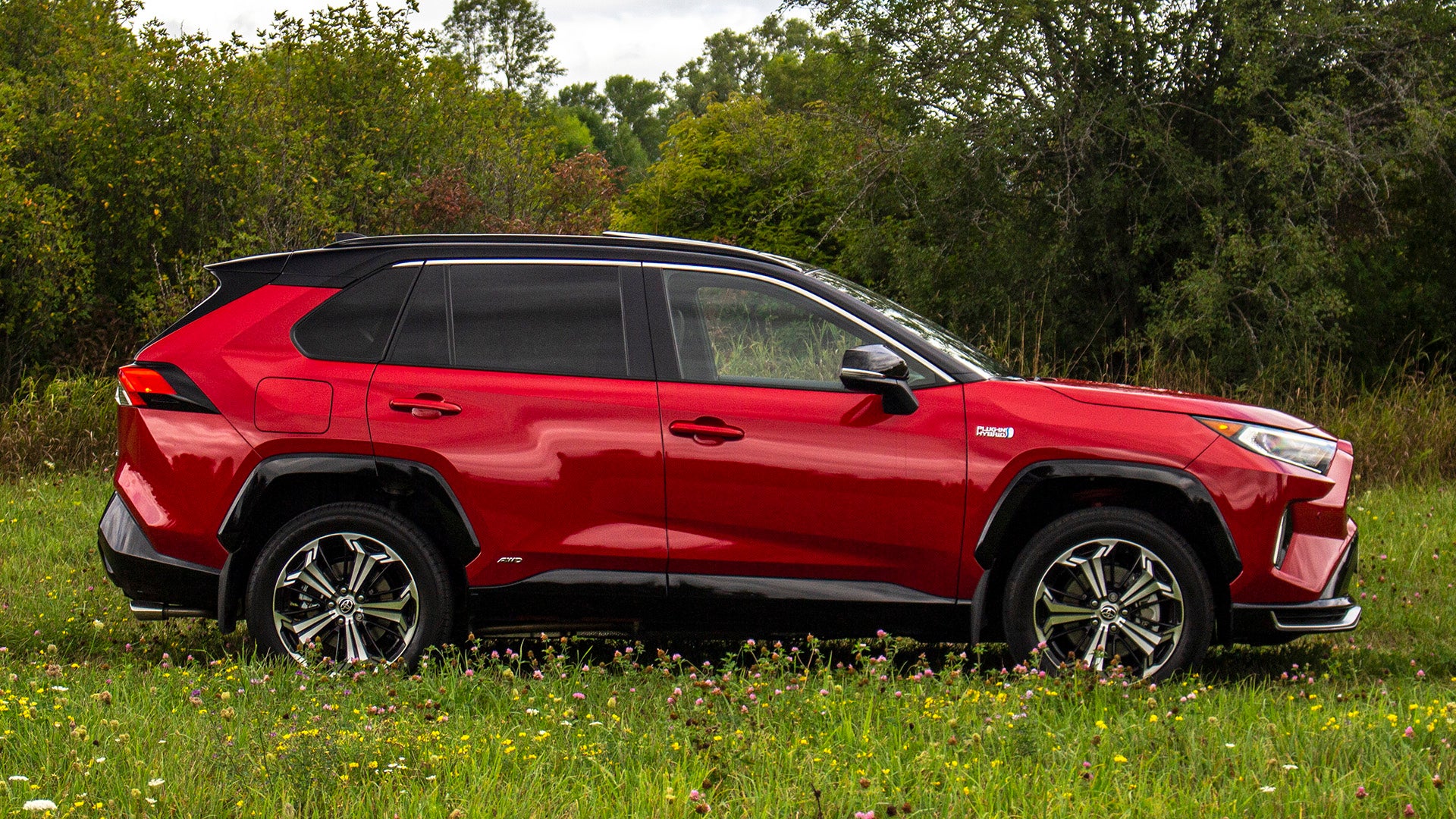 But the Prime’s story goes a little further than class leading electric range. You see, up until now, most plug-in hybrids—except for perhaps low-volume sports cars like the now-defunct BMW i8 or the latest Volvos—weren’t exactly fast nor particularly exciting to drive. For instance, a Ford Escape PHEV pumps out about 221 horsepower and will do zero to 60 mph in roughly nine seconds. Such numbers are totally acceptable for middle-class American families looking to lower their fuel bills while giving the planet a bit of a break, but that’s not what gets enthusiasts excited.

The RAV4 Prime, on the other hand, rips the PHEV rulebook to shreds and comes at the hybrid crossover segment with no less than 302 combined horsepower and a 0-60 mph time of roughly 5.8 seconds. Not bad, right?

To put it all into perspective, this RAV4 is quicker off the line than Toyota’s own V6-powered Camry TRD. As a matter of fact, Toyota claims it’s the quickest-accelerating vehicle in its lineup after the GR Supra. And given that car's BMW roots, it’s safe to say that the RAV4 Prime is its quickest car Toyota currently builds itself (not counting anything from the Lexus side of things.) What a time to be alive.

To achieve such Nissan Rogue-crushing abilities, the Prime is powered by a standard gasoline engine and three electric motors. The main source of propulsion is an DOHC 16-valve Atkinson-cycle 2.5-liter inline four good for 177 horsepower and 165 lb-ft of torque.

Toyota then squeezes a 134-kilowatt permanent magnet synchronous electric motor up front. There’s also another 40-kilowatt motor positioned onto the rear axle to achieve that magic 302 horsepower figure. All of it is sent to the ground via a continuously variable automatic (CVT) transmission. All-wheel drive is standard, something its main Ford rival can’t brag about. The Prime will tow up to 2,500 pounds, the highest tow rating in its class.

There are different ways to recharge this thing, but a Level 2 (240V) charger remains the best way to get there. Using one will take you about 4.5 hours to juice up your Prime. Toyota offers an enhanced 6.6-kW charging capability on higher trim levels which drops that time down to 2.5 hours.

Base price for a RAV4 Prime in the US is $39,220 (including destination charges) before applicable incentives. The model you see here is a Prime XSE, the top-flight model with all the possible bells and whistles. It stickers for $41,425.

Up here in state-subsidized Quebec, the RAV4 Prime is eligible to up to $13,000 CAD in provincial and federal incentives, which turns it into a frankly good deal considering what you’re getting.

Does This Review Even Matter?

It's no secret Toyota made huge strides in improving the basic RAV4 package when the current generation launched in 2018. Between the vehicle's solid new Global Architecture platform (GA-K, shared with the Camry and Lexus ES) and utterly sensible interior, I've said before that RAV4 is so good it makes more than a few of its competitors look obsolete. Driving the plug-in Prime had me wondering why I was even hired to review it in the first place. The Toyota RAV4 Prime is an honest to goodness daily driver that does everything it was meant to supremely well. The end.

For instance, its real-world electric range is spot on with what Toyota claims on paper. When I left my hotel room, the onboard computer read 41 miles. I ended up covering 43 all-electric miles, even allowing myself to floor the throttle at times. I reckon you could easily pull 45 miles using the car’s multi-stage regenerative braking feature. 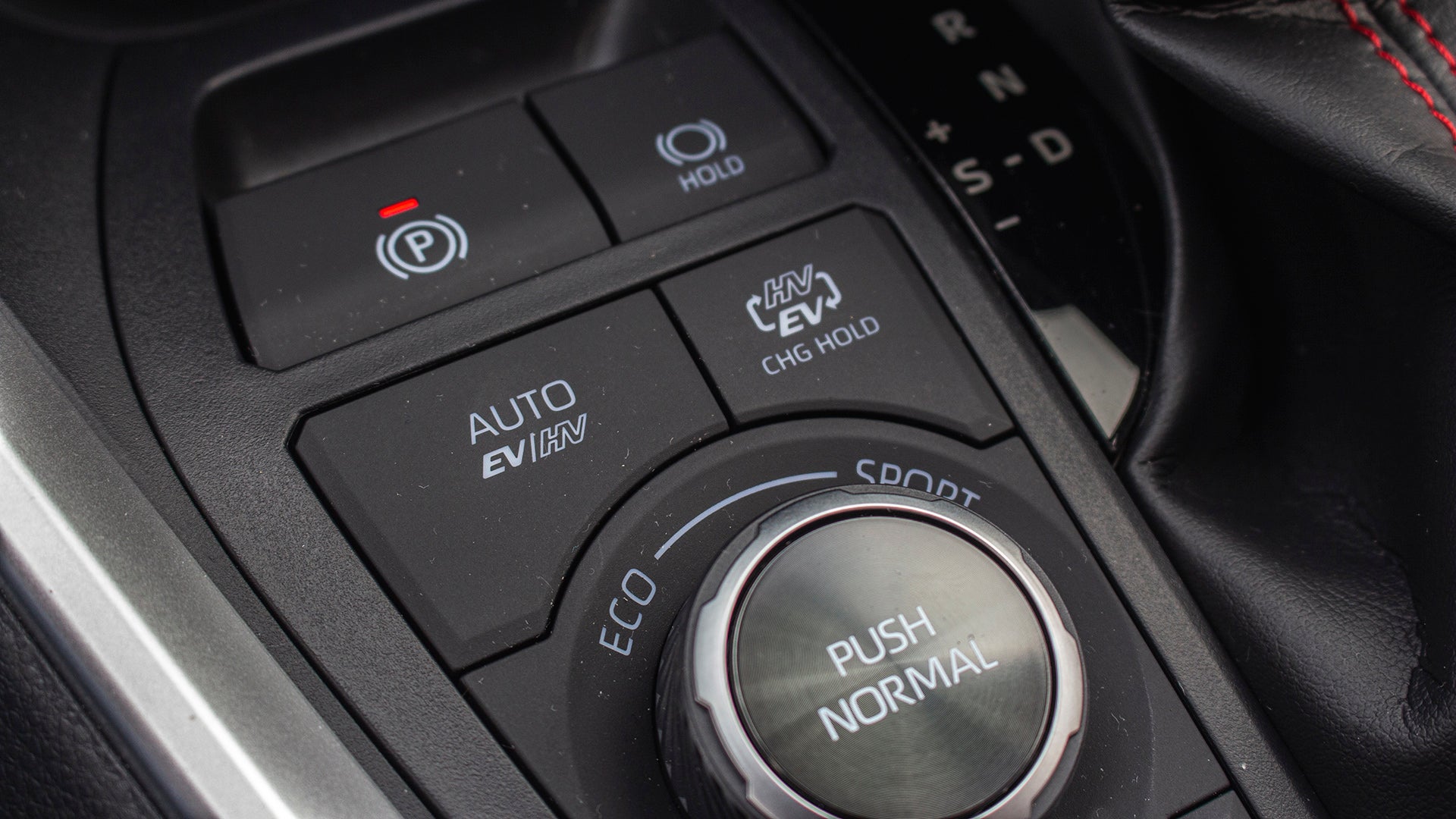 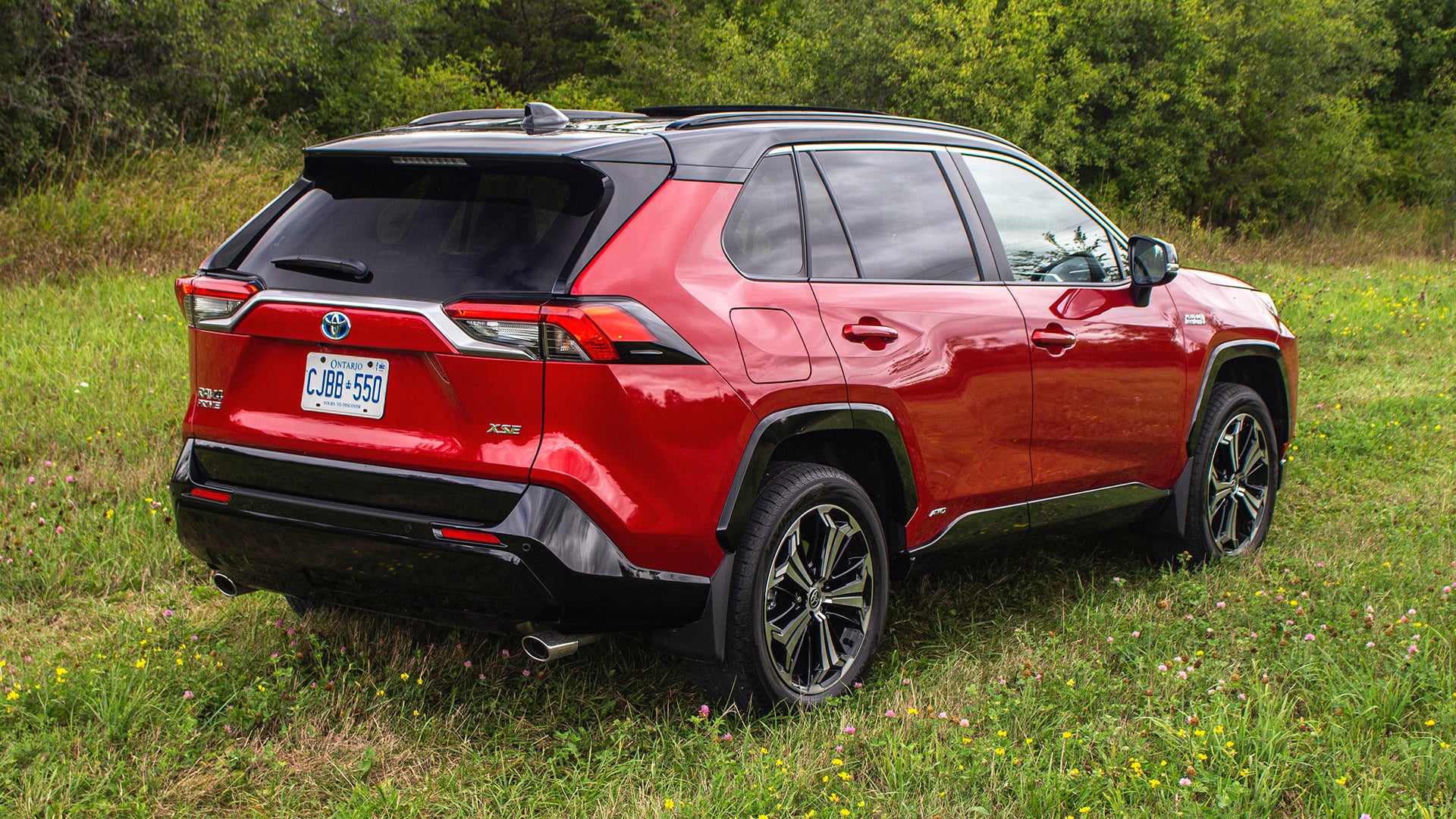 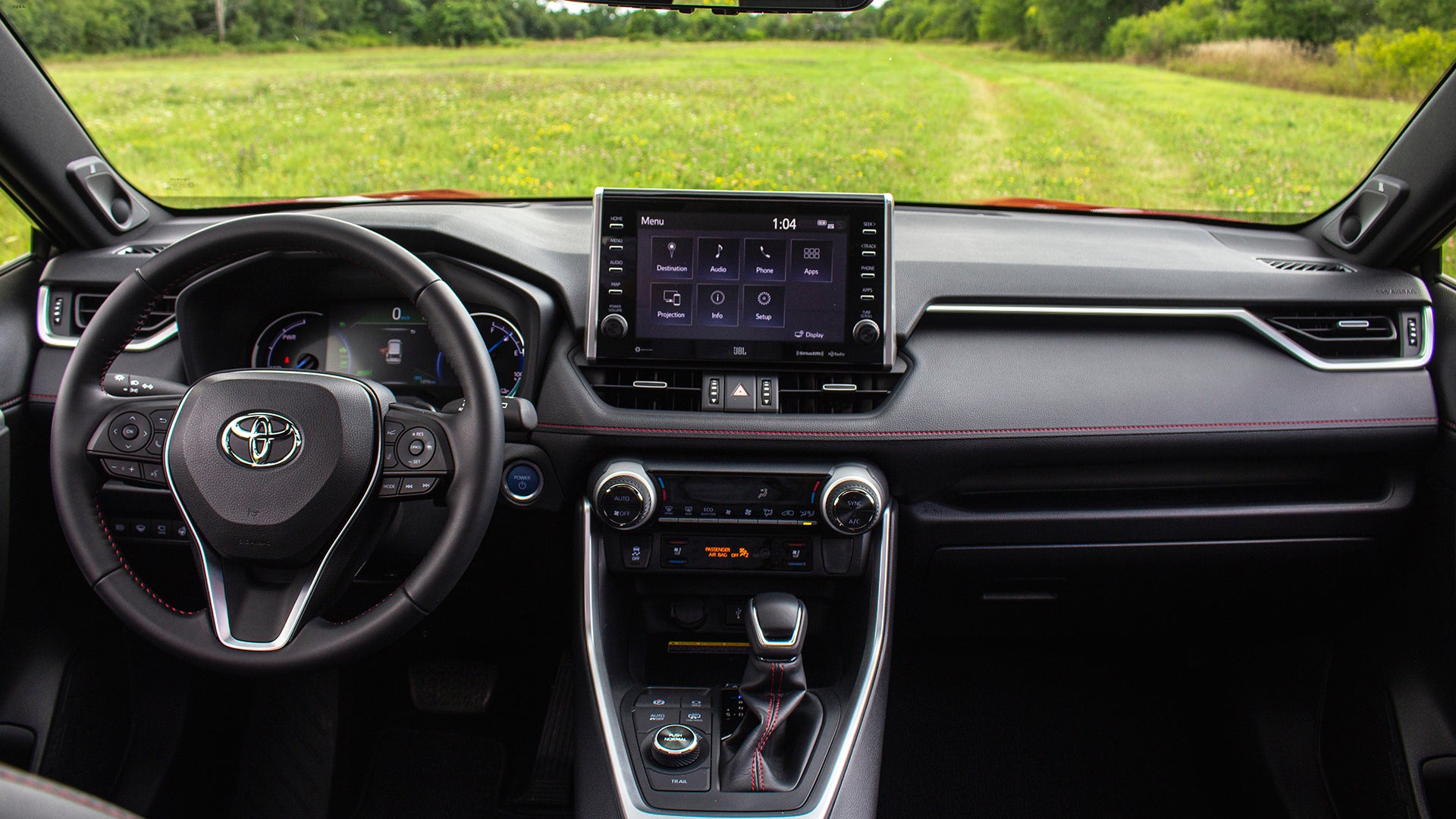 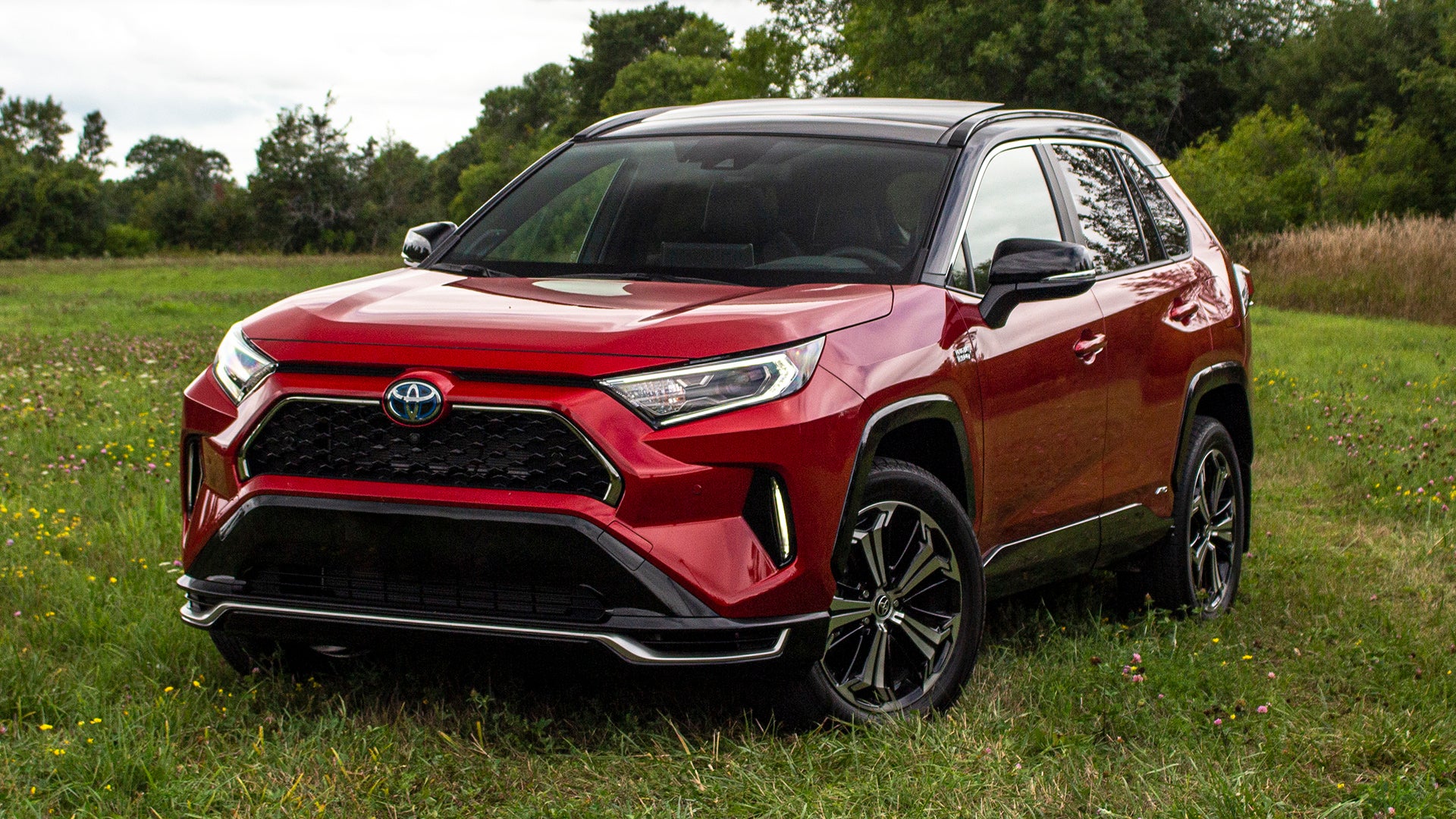 However, it should be noted that I was driving the Prime during a warm summer’s day with the AC off. Expect EV-mode range to be considerably lower than this during colder months, something I discovered myself last winter.

At this point, you might be wondering why someone would buy a plug-in hybrid in a world increasingly filled with full battery-electric options. For one thing, plug-in hybrids are generally more affordable than EVs. They also appeal to consumers who can’t necessarily rely on an established charging network. The idea is to drive electric during your shorter daily commute (if you have one at the moment, that is) and use gasoline only when you hit the road. This Toyota also has much better build quality than any Tesla, and you can take that to the bank.

Once my tester’s battery ran out of electric juice, the RAV4 Prime automatically defaulted to hybrid propulsion where it utilized a combination of both gasoline and electricity. This is also where the Prime unleashes its full power, something I quickly discovered when its front wheels lit up from the overwhelming instant torque of the electric motors.

Fast? Absolutely. But it's not particularly fun behind the wheel. Don’t get me wrong, hustling a capable compact crossover is always a good laugh, but there’s nothing about the way the Prime drives that makes your pupils dilate. It’s just quick, and it ends there.

But it sure is a comfortable and refined ride. The RAV4 in general feels nice and grown-up, almost premium, quiet, soothing, verging on Lexus-like at times. Transitions between gasoline and electric propulsion are also impeccably smooth and very discrete. You barely ever hear the four-cylinder doing its thing at full throttle, and I got to say, those front leather thrones felt great as I plowed through the Ontario countryside in this hotted-up RAV4.

And get this: at the end of my drive, where I purposely performed a few highway off-ramp launches just for shits and giggles, the onboard mpg computer hadn’t even budged, displaying a steady 6L/100 km the entire time I had it. That equates to roughly 40 real world mpg. Impressive.

All the RAV4 Good Vibes

Overall cabin ergonomics are good in a RAV4 and the only way you’d know you’re driving something special are the gauges taken straight out of the RAV4 Hybrid. You also get two new buttons located on the center console. Auto EV/HV allows the Prime to automatically alternate between your electric and gasoline propulsion (your battery needs to be fully charged to activate this feature) to maximize total range. Charge Hold stores your available EV range so you can use it another time. It’s also possible to recharge your Prime using gasoline on the go, but the battery needs to already be half full to use this feature. 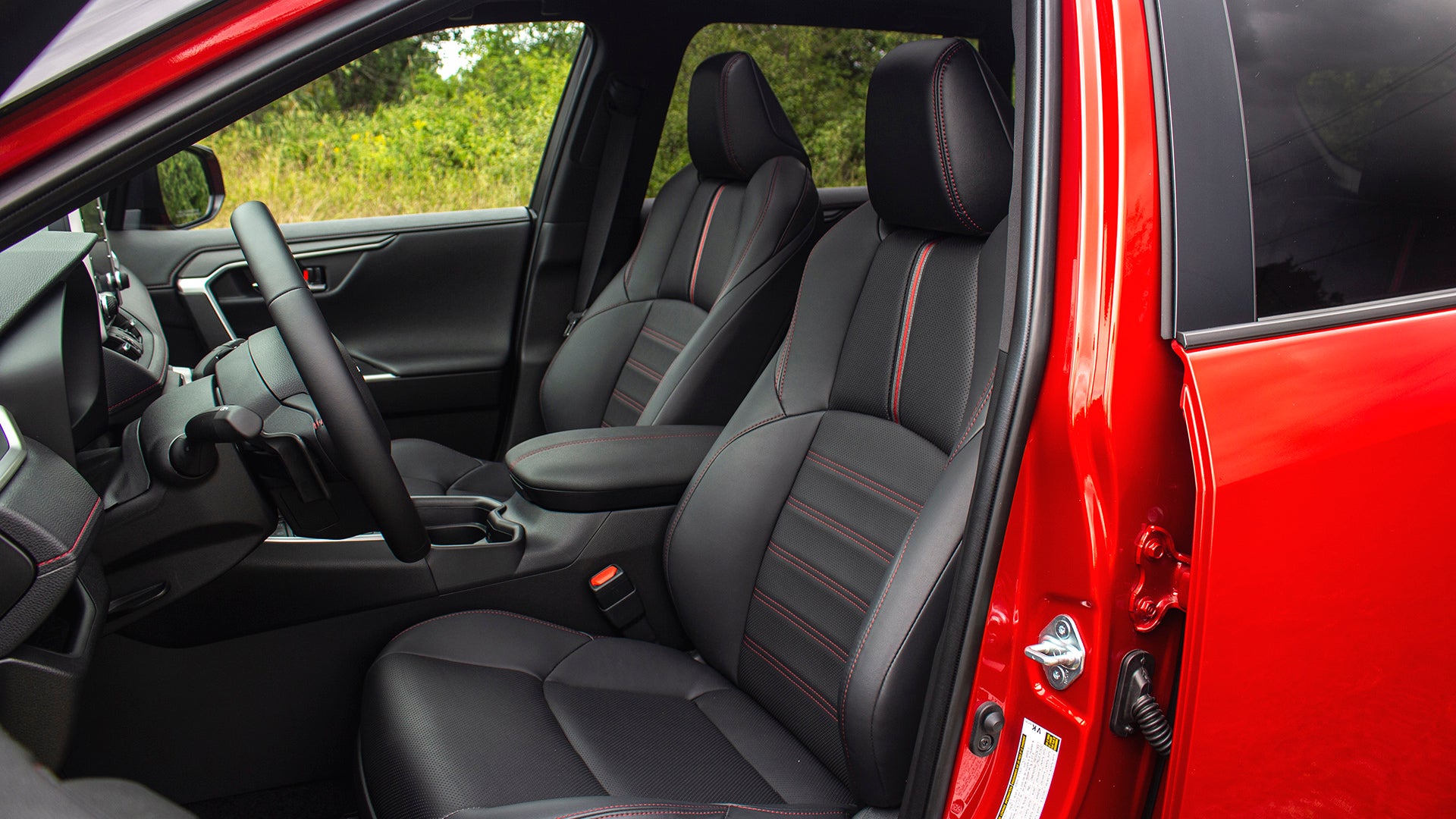 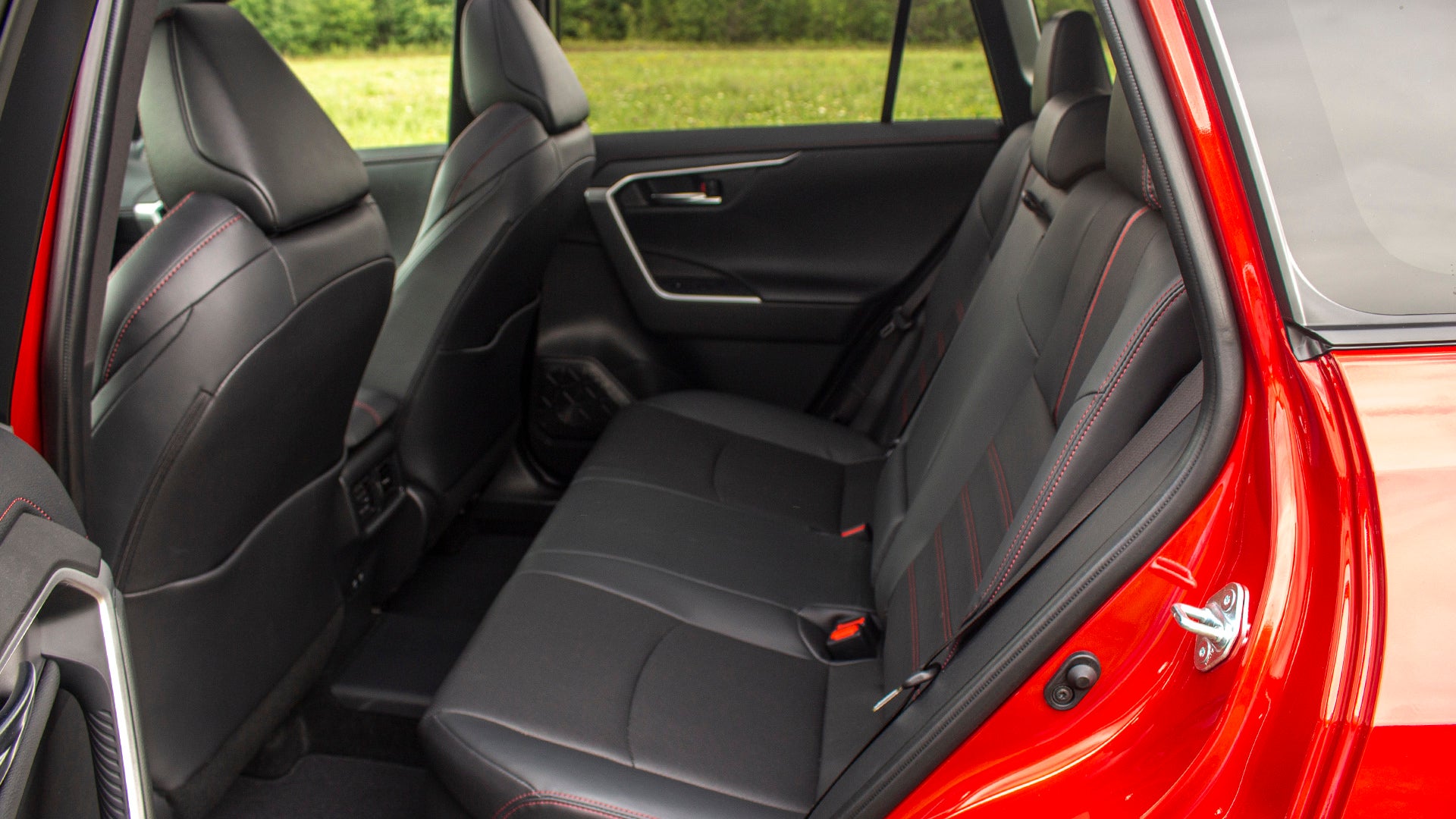 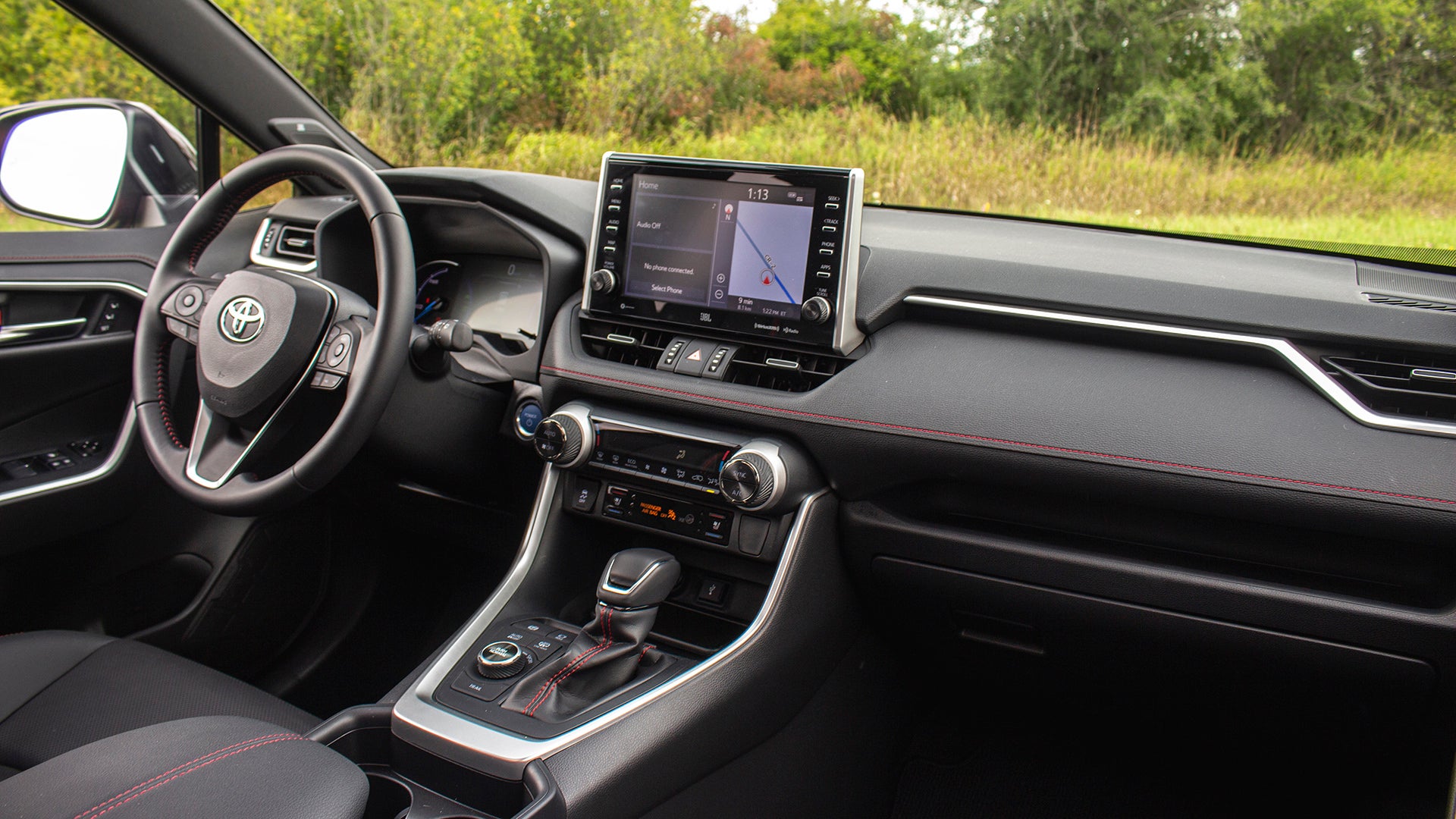 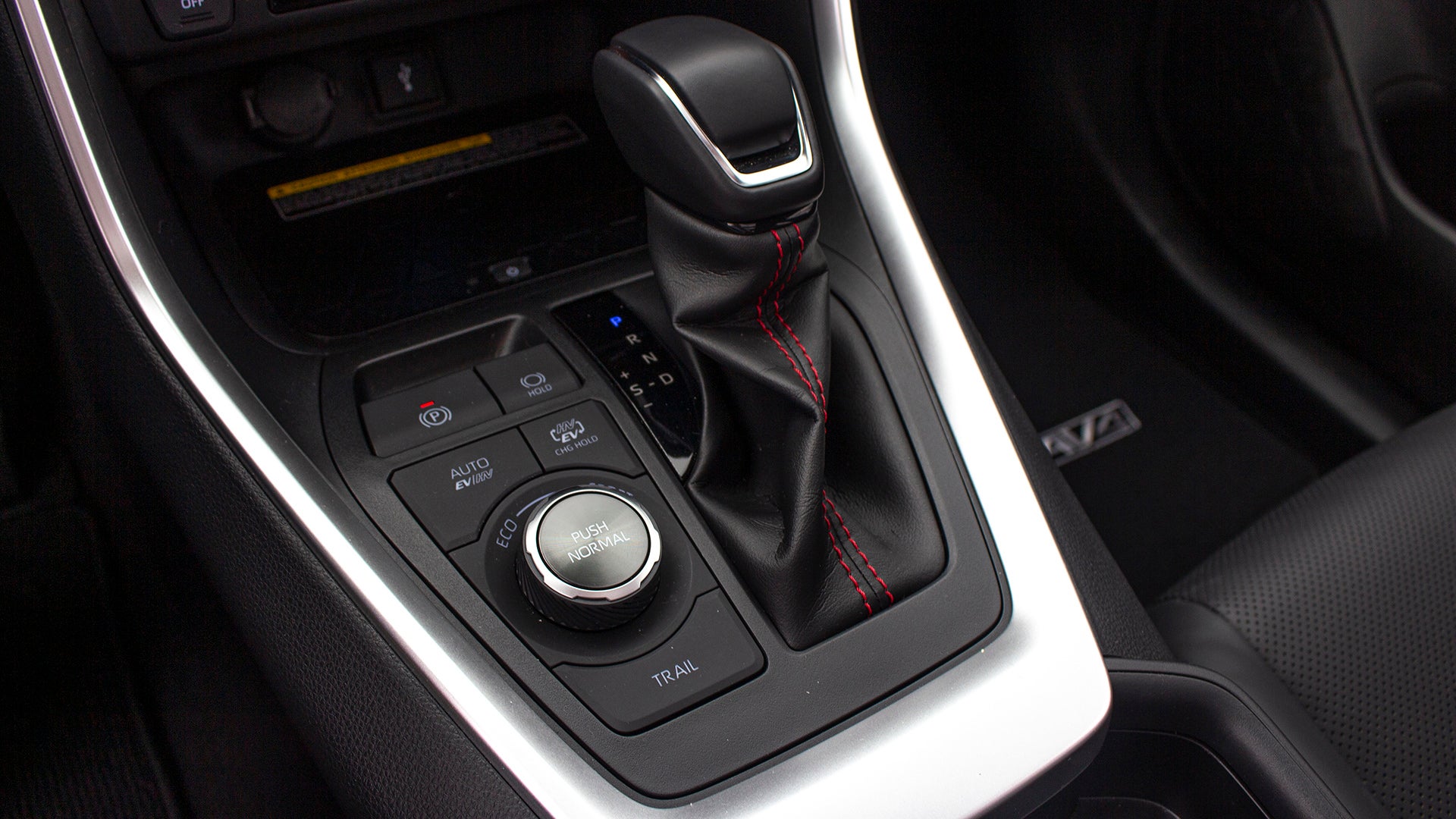 Overall cabin room is ample in a RAV4 and I was amazed at how spacious the rear seat is. Head and leg clearance are ample for a big guy like me, it’s also much easier to climb in the back of this thing than some compact crossovers out there. The RAV4 is also jammed with clever storage areas so you and your kids can toss your gear.

But I continue to dislike Toyota’s infotainment systems. They look and feel dated with their old graphics and busy menus, and their interface is far too complex. Accessing simple information can at times be tedious, even if Toyota added redundant physical controls. Connecting to my Android Auto did at least prove quick and simple, so there’s that.

Cargo space is also an area where the Prime slightly disappoints. A gasoline-powered RAV4 offers up to 70 cubic-feet of total space when the rear seat is folded flat, which puts it behind segment leaders like the Honda CR-V (76 cu-ft) and the upcoming Nissan Rogue (74 cu-ft). In Prime form, that number drops down to 63 cubes due to all the hybrid stuff happening underneath its trunk. This puts the Prime in Kia Sportage territory in terms of cargo space.

I also need to mention that while the RAV4 Prime wins on many levels, it’s sadly hard to find. Up here in Canada they’re already all sold out and Toyota tells me there’s a one-year waiting list to get one. This is partly due to limited production capacity during the first year, something the whole industry has suffered from in the age of coronavirus. As a matter of fact, only 5,000 RAV4 Primes are destined to U.S. dealerships (1,000 for Canada). So, if you want one, you need to know the right people, because they’re flying off dealer lots as I write this.

Honestly though, if that’s the RAV4 Prime’s only problem—the fact that it’s selling like hotcakes and Toyota can’t supply the demand—it proves how accomplished this vehicle is. It downright pulverizes its main rivals in all the areas that matter. And you’ll even get a good deal on one if you live in a heavily incentivized area. Factor in Toyota’s legendary reputation for reliability and resale value, and what you end up with is a no-brainer vehicle that’s already set to give its competition a solid run for its money.

If you still count yourself among the complainers that claim Toyota builds boring cars, I’m here to remind you that you just read a review for a compact hybrid crossover that does 0 to 60 in under six seconds.

William Clavey is an automotive writer based in Montreal. His work has appeared on The Drive, Jalopnik, The Car Guide and more. He runs claveyscorner.com.