Toyota says the new Highlander Hybrid can achieve 34 mpg combined, which is surprisingly good for an eight-seater. 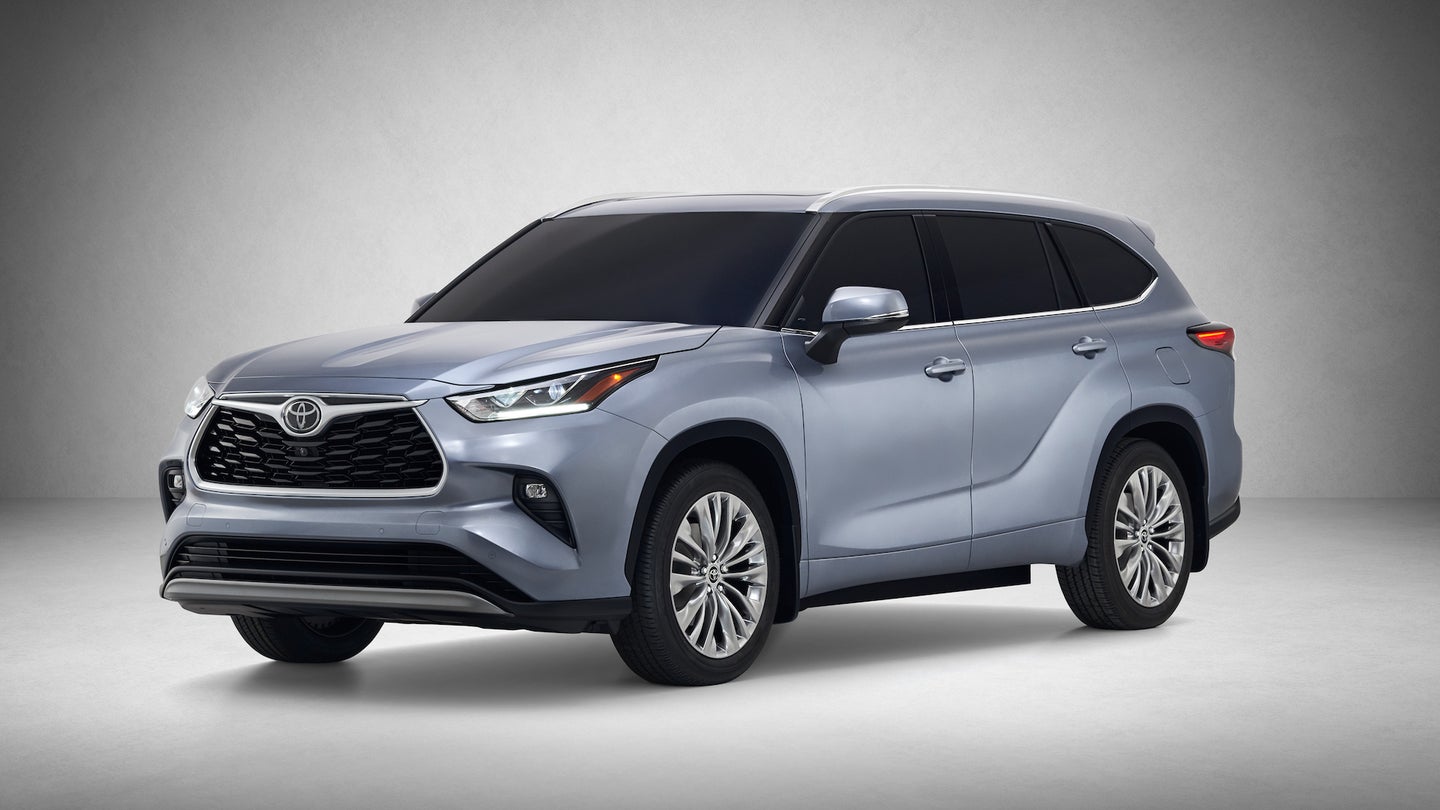 Topline: Debuting Wednesday at the 2019 New York International Auto Show, the new Highlander does right by the American standard of more is better. More efficient, more capable, and more luxurious. In fact, the all-new crossover borrows heavily from its Lexus brethren, bringing more luxury and swank to the popular segment.

What's New: Let's talk engines like we're your uncle. Toyota's standard powertrain for the new Highlander is a 3.5-liter V6, one rated for a combined 22 mpg, thanks to a stop-start system that reduces wasteful idling. It's available with front-wheel-drive or part-time all-wheel-drive, and its 295 horsepower plus 263 pound-feet of torque allow the Highlander (with its optional towing package that adds an oil cooler and heavy-duty radiator) to haul 5,000 pounds. There's an automated trailer sway control, too, so you don't have to be a trucker to handle the Highlander with a trailer.

Like the last Highlander, this one can too be had as a hybrid, one more attractive than ever before. Its smaller, 2.5-liter inline-four is armed with a pair of electric motors that boost total system output to 240 horsepower, which isn't a ton compared to the V6, but this powertrain returns a staggering 34 mpg, for a 17 percent improvement over the outgoing Highlander Hybrid's 28 mpg. Even better is the fact that the new Highlander Hybrid is a plug-in model, and capable of driving a limited range on electric charge alone. Said range hasn't been divulged by Toyota.

On any surface that's not asphalt, the Highlander's available torque-vectoring all-wheel-drive and varying terrain settings will do its best to keep the driver in control of the vehicle. Even the attractive hybrid mentioned above can play along, as its AWD system incorporates an electric motor to the rear axle in a system similar to that used in the Prius AWD-E announced last year.

Regardless of which AWD system you (might) choose, the Highlander will be capable of playing the role of its namesake. Driving uphill to the highlands will be made easier by the hill start assist, and coming back down again, hill descent programming should prevent anything Worldstar-worthy from happening to your precious Highlander...or its more precious cargo of up to eight people.

Toyota has been more than generous with the technology in this Highlander; Toyota Safety Sense, Apple CarPlay (and its Android/Amazon competitors), and a one-year subscription to Toyota Safety Connect all come standard on even the lowest-trim Highlander L. Inductive charging is an option, but enough USB ports to power a robot uprising aren't.

Upholstery connoisseurs should have their tastes well-covered; cloth is standard for L and LE trims, XLE gets faux leather, and faux plus trim of real leather comes with Limited and Platinum. Said top-level trims also get standard LED mood lighting and a premium JBL sound system, 1,200 watts in strength, with 11 speakers and software to optimize even highly compressed audio files for borderline audiophiles.

What You Need to Know: Gas-only 2020 Highlanders hit American dealers in December, and hybrids will follow in February of 2020. Pricing has yet to be announced, but Toyota will declare its asking prices by the time the Highlander arrives on the market. If it's anything like past models, Highlander owners won't want to get rid of their vehicles, which were rated in one study to be the longest-kept vehicle when bought new by Americans.