Tow Truck Gets Towed After Driver Hooked for Speeding 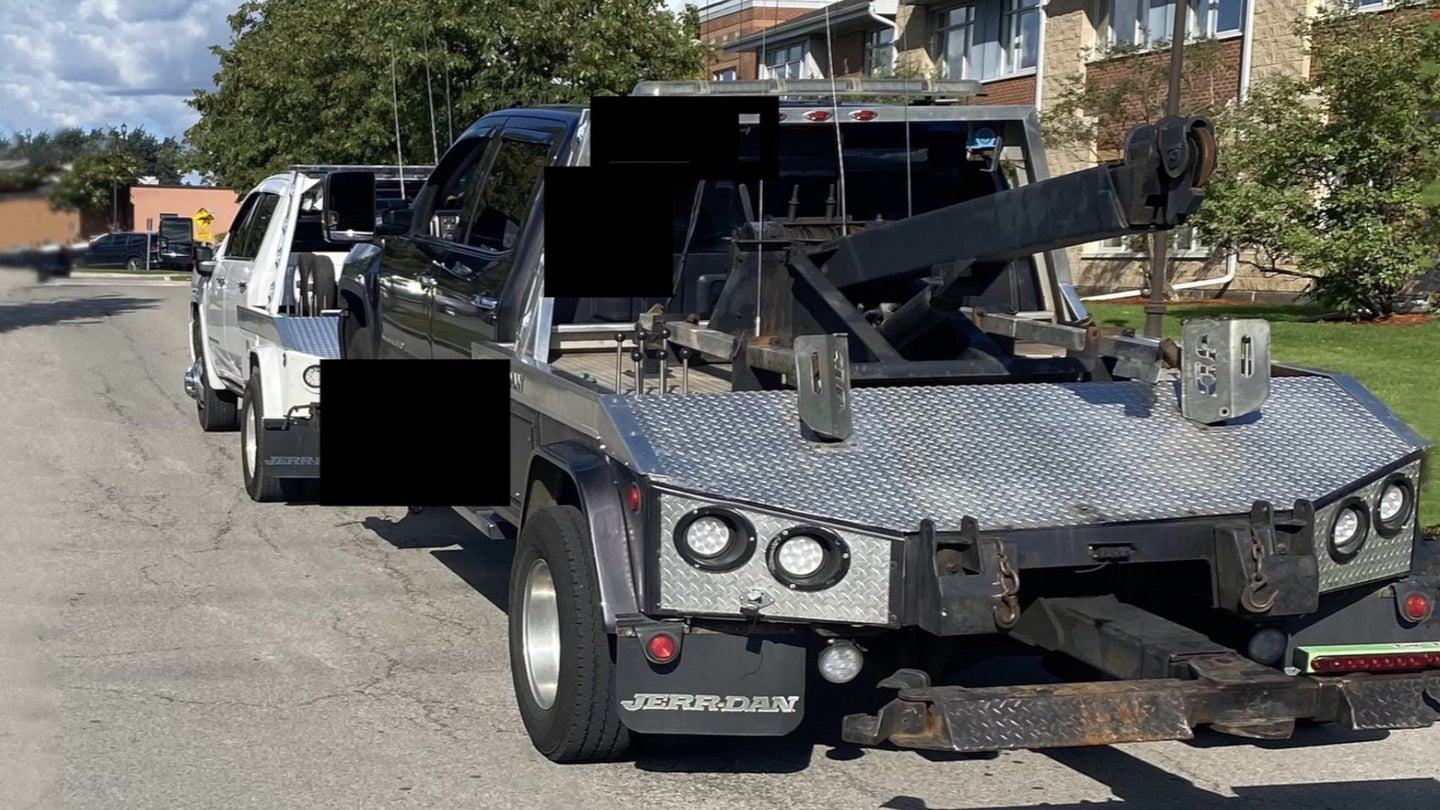 When you're broken down on the side of the road, or stuck in a snow drift, a tow truck is a welcome sight. However, if you're in the middle of your commute, you probably don't want to see one bearing down on you at a huge rate of speed. Officers of the Halton Regional Police felt much the same way when they stopped a local tow driver after catching them speeding in downtown Milton, Ontario.

Allegedly, the driver was clocked doing 104 km/h in a Community Safety Zone signposted at 50 km/h. According to local radio station 101.3 Milton Now, the incident occurred on Ontario Street South by the Allendale Long Term Care Facility. Reportedly, it's the driver's fourth "stunt" charge since 2019. In Ontario law, drivers can be charged for "Stunt Driving" if caught speeding over 50 km/h above the posted limit, or if engaged in any sort of chase or competition, amongst other acts.

Amusingly, the tow vehicle was towed away by another tow truck, which makes sense but is still an entertaining visual. Police took measures to obscure the identity of the offending vehicle, though it bears a striking resemblance to the white tow truck that was enlisted to drag it away.

Intriguingly, a truck of similar design appears in a photo posted by the Highway Safety Division of the Ontario Provincial Police in early August. The image concerns four tow trucks charged with "street racing" for making unsafe lane changes, passing on the shoulder and generally driving dangerously.

In these images, the second truck in front of the police cruiser has the same tail lights and mudflaps as the trucks in the photo posted by Halton Regional Police. Poor lighting and resolution makes conclusive analysis difficult, however.  Hashtags indicate the drivers were given 7 day license suspensions with the trucks impounded for 14 days. Those dates leave plenty of time for the vehicles to get back on the road to reappear in the September incident, however, it's all speculation without further corroborating evidence available at this stage. Enquiries have been made to the departments involved, though no response was received before publication time.

While it's unclear if it's the same truck or driver were involved in both cases, the multiple historical charges suggest there's an ongoing issue, nonetheless. Many on Twitter were incensed to learn that a driver could rack up so many violations without being forced off the road. The tow industry in Ontario has faced broader problems, too, with multiple police officers charged in a multi-year "breach of trust" investigation as reported by CBC earlier this year.

Tow trucking can be a wild business, as many involved would share, and the repossession side of things only gets crazier. Drivers are under pressure to be the first on the scene in order to secure the job. The idea of tow jockeys in Ontario racing for pure competition seems unlikely; it may simply be that they are trying to get to incidents faster with little regard for the law. However, stranger things have happened, and we'll update this story if local police are able to shed more light on the issue.

A man, woman, two children, and even a dog were inside the vehicle during the repossession attempt.

After a woman’s car left her stranded in the middle of an intersection, the trio of teens returning from Tim Hortons helped her push it home.