The new SUV breaks with tradition in nearly every way possible for the storied British sports car manufacturer. 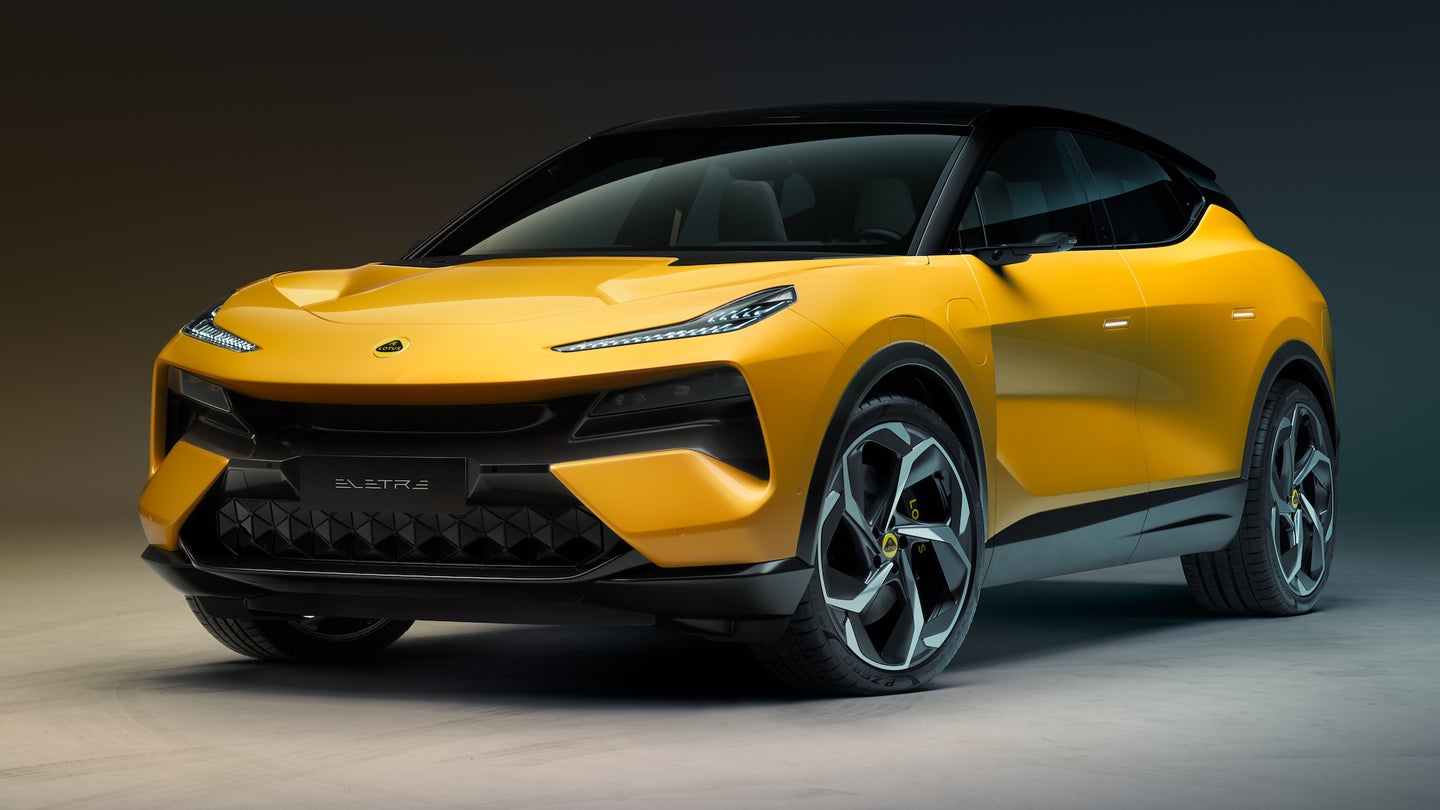 Lotus has been slated to make an SUV dating back over half a decade at this point, and the world got a sneak preview of what it would look like after a patent document filing for a Lotus crossover was spotted earlier this month. Now, the world can finally see what Lotus has been cooking up: The electric Eletre, the company's first five-door production car.

The Eletre is billed as not only Lotus' first SUV, but its first Hyper SUV. It boasts a "minimum of 600 hp" routed to all four wheels, a zero to 60 time of under three seconds, and a targeted range of up to 373 miles on a single charge thanks to its 100+ kWh battery pack. "Hyper" is debatable, but the specs do put it in the range of some fairly potent SUVs and the company maintains that it will embody the spirit of the other Lotus EV currently on the market, the Evija, and reinterpret it for the electric crossover. The exact specs are still vague, but the SUV is built on Lotus' Electric Premium Architecture that can accommodate a variety of batteries and motors, which means even higher-power variants could still be in the pipeline.

But even in the current reveal, the Eletre does promise some high-tech functionality, including deployable LIDAR sensors integrated into the design of the vehicle itself, which is a first for a production car. While LIDAR is a widely-used technology for autonomous driving abilities, it rarely is seamlessly integrated, as the hardware for pulsed-laser technology is bulky. However, because the Eletre leaves the factory floor with highly accurate self-driving hardware, Lotus says that the SUV is fully prepared to support future end-to-end autonomous driving technology and can be updated at will via over-the-air software patches available as development continues.

With this OTA functionality, "customers [will be able] to purchase new features enabled via software as they become available." So for those of you who don't want your car to come with DLC, you're a bit out of luck. Underpinning all of these remote-update features is built-in 5G compatibility that will hopefully outlast its predecessors.

Other features hidden inside the four-door Eletre include sustainably sourced interior appointments, using a blend of synthetic microfibers and wool, which the company notes is also lighter than leather for "weight savings." A panoramic glass roof provides a skylight for all four occupants. Carbon fiber finishes are found throughout the hardpoints of the cabin, and Lotus is eager to point out that the instrument panel, with its central section removed for less material, demonstrates the company's commitment to "light-weighting" even in its first SUV. Unfortunately, curb weights are still unrevealed, so the extent of this weight reduction can't be fully known yet.

While it's completely unsurprising that Lotus has deemed it necessary to build an SUV in an era where even Ferrari has bowed to the pressures of consumer demand for four-door brutes, it fills me with mixed emotion to see the company best known for "simplify and add lightness" building a crossover that can drive itself.

It's a promising new frontier of technology and the design is actually quite handsome, admittedly, but I still had a poster of an Elise on my wall as a kid. It doesn't matter we feel about it, though: Lotus says this is the first of three "lifestyle EVs" coming in the next four years, and Group Lotus CEO Qingfeng Feng has said the Eletre "marks a turning point for our business and brand."