Automakers seek softer targets from regulators...but should be careful what they wish for. 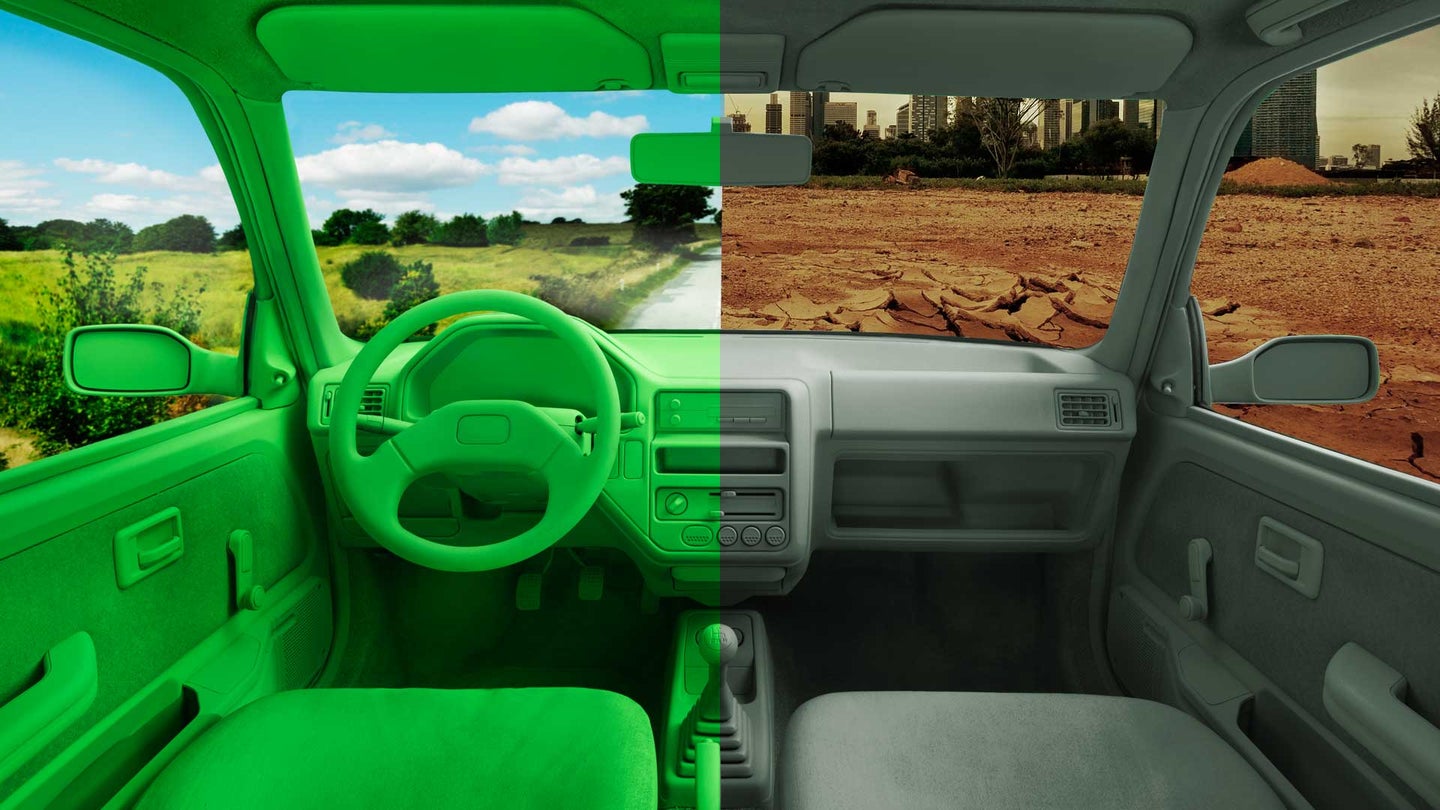 Scott Pruitt has his dream job: Taking a cleaver to federal regulations as the sworn-enemy-turned-chief of the Environmental Protection Agency. Thanks to him and other Trump appointees like him, automakers know they have friends in high places, a sympathetic ear in an ongoing federal review—and ideally for them, a rewrite—of Obama-era rules that would nearly double Corporate Average Fuel Economy (or CAFE) to 54.5 miles per gallon by 2025.

But while automakers would love to rip up some regulations, they’re not tearing up long-term plans for higher-mileage cars. Auto insiders I spoke with—including two executives who work with Washington regulators—know that climate change isn’t going away, and can’t be prettied up or papered over forever. Oh, they’ve got gripes, beginning with their longtime contention that mega-mileage cars will cost them too much build and then gather dust in showrooms as consumers decide which SUV better meets their needs. Unsold cars mean shrinking profits and idled factories; take, for example the slow-selling Chevrolet Bolt, which Motor Trend prematurely anointed a “game changer” but which has, for now, merely changed the game for hundreds of its laid-off assembly workers in Michigan. (The Bolt’s icy initial market reception brings me no pleasure, even if I predicted it).

Responding to pleas from 17 automakers to consider such market realities—and reconsider 2025 rules that the Obama administration locked in just before Trump took office—Trump and Pruitt have have already thrown them a big bone: The National Highway Traffic Safety Administration has expanded its review to include 2021 economy rules instead of starting with 2022 ones, and may even decide to freeze standards at those 2021 levels. That would effectively constitute a "Get Out of Jail Free" card for automakers.

But they know that any reprieve will likely be temporary. Executives involved in the rulemaking process—who asked not to be named because they aren’t authorized to comment—say that the industry’s long-term path is clear: Higher mileage, fewer carbon dioxide emissions.

Executives can tick off the myriad global actors who not only believe climate change is a thing, but are demanding an urgent response: California and other green-minded states, including their governors and attorneys general; the European Union; environmental groups; academia; and NGOs. Even inside the Trump administration, counterweights are swinging against the science-denying tide. A damning new draft report from scientists in 13 federal agencies concludes that climate change is already here and causing measurable effects: Average temperatures have risen drastically since 1980, and recent decades have been the warmest in the past 1,500 years. The Trump regime, critics worry, will downplay, dismiss or ignore that report, drafted as part of a National Climate Assessment that Congress decreed must be produced every four years.

But ultimately, this modern-day Snopes Trial—evidence-based science on one side, faith-based bromides on the other—isn't dramatically affecting automakers' current plans. Thanks to their ultra-long product cycles, car companies must already be plotting their 2025 lineups, using any and all high-def crystal balls they can find. One automotive executive acknowledged that as a purely practical matter, the Trump administration might be gone even while 2020 models arrive in dealerships.

And whether it's 2020 or 2024, Trump's successor might have a very different view of climate change and the need to mount an immediate defense. Woe to the automaker who traipses into a green-leaning Oval Office in 2021, asking for regulatory relief, federal aid or even a fair hearing—especially if they’re viewed as complicit in the current bid to neuter the EPA and its authority. At that point, if automakers can’t whip out a Powerpoint showing exactly how they’re going to transform their lineups—hmm, by tomorrow would be good—the meeting is not going to end well.

As such, automakers are looking beyond today's environmental Sturm and Drang to looming competitive and regulatory challenges from California to China. They must know that even the breathtaking cast of strip miners and climate deniers assembled by Trump can’t take us back to the 1960s, when Appalachian coal rolled, import cars were still novelties, and Los Angeles skies were choked with smog.

Seeing the green handwriting on the wall, auto Insiders emphasize that their companies remain fully committed to boosting mileage and developing alternative-fuel cars. Yet executives do feel blindsided by what they call Obama’s premature, unrealistic bid to lock in the most ambitious rise in fuel economy in American history. One noted that the industry has lifted fuel economy by about 1.6 percent annually, on average, since 1975. Yet the proposed 2025 rules ask automakers to more than double that ramp-up rate, with annual increases of more than 4 percent beginning in 2021.

(One counter-argument, however, is that the slow rate of advance had less to do with available technology, and more with automakers who put no priority on fuel economy; preferring to invest money on more than doubling average horsepower and focusing on weight-ballooning size, safety, and creature comforts instead. That argument posits that, unless automakers get a regulatory kick in the pants on efficiency, they will always find better things to do with their money).

Auto insiders also strongly dispute the government’s claim that boosting the new-car fleet beyond 50 mpg would cost them just $200 billion, while returning $1.7 trillion in fuel savings to consumers. Federal regulators, they argue, consistently underestimate the cost of fuel-saving technology and overstate the money consumers will pocket. Cheap unleaded gas, one said, make potential weekly fuel savings the equivalent of a McDonald’s Happy Meal—too nominal to make consumers give up the car they have now. And most consumers, the executive said, don't even bother with that cost-benefit analysis; they’re buying cars based solely on a monthly payment, taking on longer loans to do so, and will simply hang on to used cars even longer if the value proposition doesn't add up.

Today’s low gas prices, they say, also drive consumer choices in a way that’s not given enough priority in federal calculations, putting the onus on automakers rather than the market at large. The EPA's 2025 rule-making, they say, failed to properly consider the agency's own criteria, which included “consumer acceptance” of pricier, high-mileage models. The market reality—which has seen consumers flee small and hyper-efficient cars in favor of SUVs, pickups and crossovers—should have put automakers on firmer ground with regulators, one executive said.

For the moment, those automakers are on decidedly firmer footing. Industry pal Pruitt—who critics say is running the EPA largely in secret, firing scientists, dismantling rules, while surrounded by armed security 24/7—surely agrees that automakers are hamstrung by pointless regulations.

Where they diverge is in their views on climate change. Trump says it's a hoax. Pruitt, the ventriloquist's dummy of the energy industry, parrots whatever his corporate patrons need him to say. Global automakers, in enlightened contrast, say that climate change is real and a potential threat. Yet they'd still largely prefer to let the market decide, and not have regulators dictating their business and the pace of technological change.

I couldn’t get an automaker to comment on their closed-doors dealings with the EPA or NHTSA. But if I was a betting man, I’d wager that Pruitt and Trump will indeed freeze fuel economy rules, scuttle 2025 targets, and then tweet and trumpet the beautiful plan that will make car factories magically sprout across the Rust Belt. It’s going to be one hell of a party, a toast to the free market with champagne all around. But car companies know the party can't last forever.