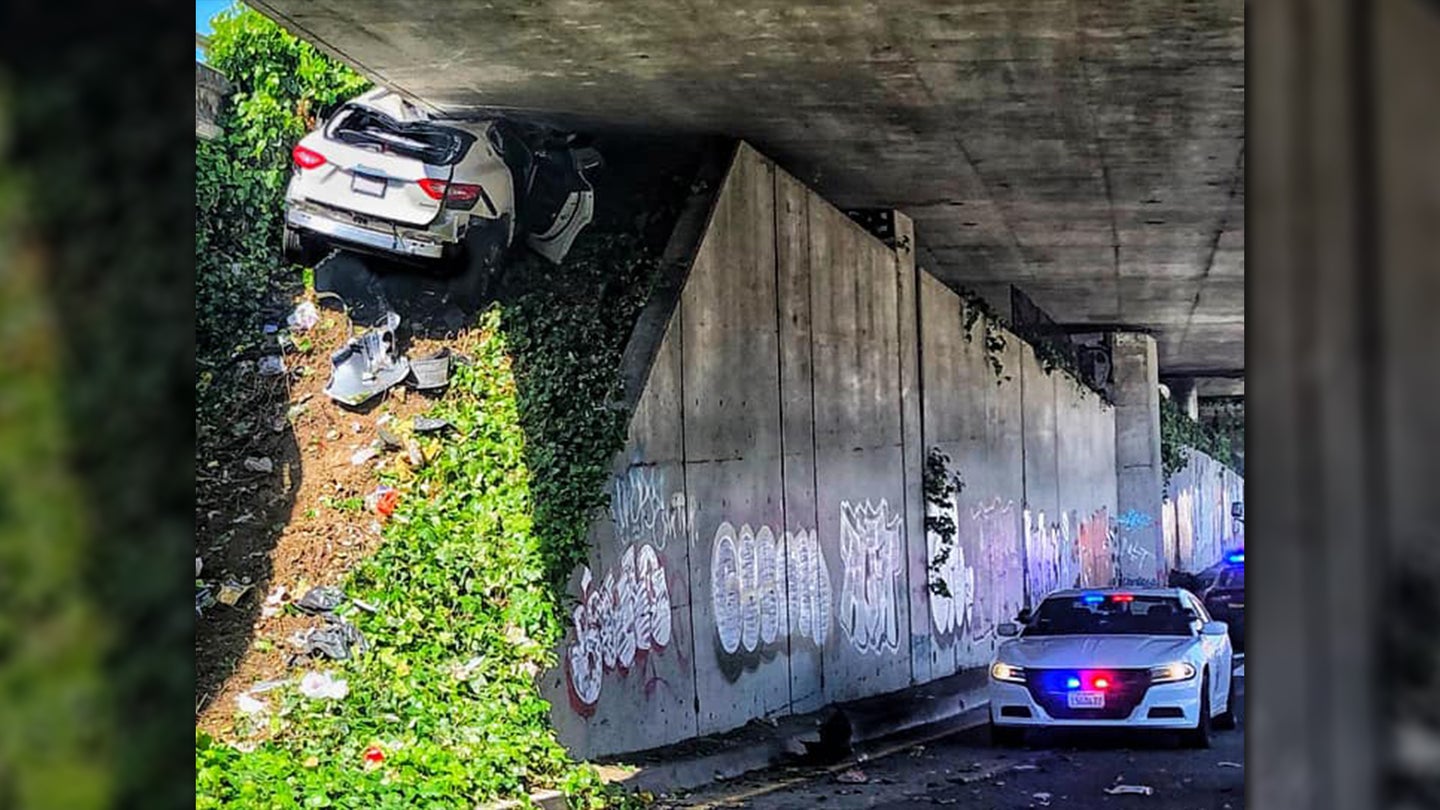 The California Highway Patrol's Oakland division declared the speeding driver of a Maserati Levante "lucky to be alive" after they stuffed the SUV into the crevice between an embankment and an overpass, at a speed reported to be over 100 mph.

According to a post by the CHP's Oakland office on Instagram, the crash occurred Monday morning after a CHP officer attempted to conduct a traffic stop on a speeding Maserati SUV. Photos of the vehicle depict it with the vehicle's base, 19-inch Machine-Polished Zefiro wheels, available from the entry-level to S Granlusso trims, which run from $78,290 to $94,290. It's no 590-horsepower Levante Trofeo, but it still got the jump on the CHP, leading officers on a pursuit SFGate reports tore westbound Interstate 580 at speeds exceeding 100 mph.

Shortly into the chase, the Maserati reportedly exited the highway, only to ramp up an embankment beneath an overpass at full tilt, and wedge itself into the crook between the two. Though the roof was partially caved in, the 32-year-old male driver is said to have avoided death, potentially due to the driver's side of the vehicle taking less of a wallop from the bridge. When extracted from the vehicle, he unsurprisingly complained of pain, forcing his hospitalization.

"It was a short-lived pursuit," commented Officer David Arias of the Oakland CHP to SFGate. "He didn't make it far before he exited and as soon as he exited, instead of going straight, he veered left, went off the ramp and then went up the embankment and collided with the underside of the freeway."

"It's unbelievable that he didn't die," Arias concluded. "It's crazy that he lived."

Should the driver dodge his charge of reckless evading, he may have to face the wrath of the Levante's owner—that'd be his girlfriend according to SFGate. Soon to be ex-girlfriend, one suspects.

Unfortunately for Chrysler, “the most exclusive product ever offered by Chrysler” looked far too much like a LeBaron with trident logos.